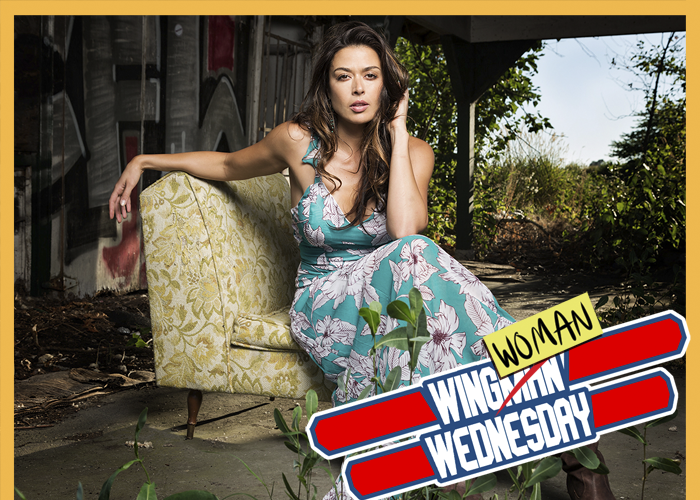 There was a time when there were only a small handful of new shows that viewers had to track, mostly in the fall, but thanks to an endless number of cable networks and streaming platforms producing scripted programming, it seems there is a never-ending supply of series premieres to plan for. With life taking a large portion of our time (family, work, sleep, etc.) how do we divvy up the scattered free hours that we have for the most recent pop culture players and newbie debuts.

Well for starters, you could tune-in to anything Aliyah O’Brien is starring in. Guaranteed to capture your attention, the Toronto-based actress is a charismatic  scene stealer, recreating on-screen likability in almost every character she inhabits. But don’t take our word for it. Her new series “Take Two” premieres June 21 on ABC, opening the door for her most recent character, Detective Christine Rollins, to win you over.

We recently sat down with O’Brien to discuss the balance that the show strikes, why she has been cast in a lot of authoritative roles, and how she reacts when she gets on a roller coaster.

TrunkSpace: In an industry where it seems everything is hurry up and wait, how exciting was it to receive a straight to series order for “Take Two?”
O’Brien: Oh my gosh – it’s a gift from the universe, my friend. Yeah, it’s a real treat. I didn’t realize how many pilots get made and then don’t go to series. I had a conversation with a friend about this, and it’s something like 15 percent. I mean, “Huh?” It’s so odd to book a pilot, and then let alone have it get made.

TrunkSpace: The premiere is set for June 21 on ABC. In a day and age where there’s so much content available to people, why is “Take Two” one that they should make time for?
O’Brien: I think people are really going to like it. It’s really fun, and for me anyways, it has that nice balance of the mystery of solving the crime, which is engaging, but also it’s grounded and real. I think you care about the characters enough that you will also want to see their lives unfold as they solve the mysteries. I’m really partial to dramadies that are grounded and real and relatable, but that also have some fun and uplifting elements. I think people will really like it, and I think we got a good cast that’s doing a great job. and our writers are fantastic. I’m hopeful that it does well and we do this for many years.

TrunkSpace: And it seems to have its own distinct voice, which should help it stand out.
O’Brien: Exactly. Our creator/showrunners, Andrew (Marlowe) and Terri (Edda Miller), are veterans in this genre, and I think that what we have is unique, but it’s also backed by tons of experience. What I really like about them is, though we are doing a formulaic procedural type show, they play a lot against stereotypes, and they come up with some interesting concepts and twists where you’re always surprised, which is super fun. I know for myself, with my character, which I can’t really reveal a ton of, but they did some stuff that surprised me even, and played against stereotypes, and I always really appreciate that.

TrunkSpace: Like you said, you can’t give too much away about your character, but what’s interesting about her that you wouldn’t mind exploring 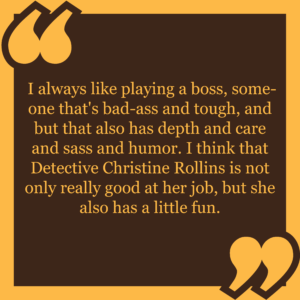 for 100 episodes or more?
O’Brien: I think that what’s cool is that she is… I always like playing a boss, someone that’s bad-ass and tough, and but that also has depth and care and sass and humor. I think that Detective Christine Rollins is not only really good at her job, but she also has a little fun. Hopefully down the road you’ll also discover that she’s also a very caring human being, so she’s not just a surfacy sort of emotionally-suppressed woman, which I’ve played a lot of those. (Laughter) That’s not… that is boring.

TrunkSpace: We’ve also noticed that you’ve played a lot of authoritative figures.
O’Brien: Isn’t it interesting? It’s true, I usually play these sort of strong, tough women, and I guess there’s an element of me that is that obviously or I probably wouldn’t get cast as those roles. Then there’s the side of me that’s like this crazy hippy chick who’s really soulful and has a house full of crystals and is kind of a nerd and is freaked out a lot of the time and is constantly working on that. (Laughter) It’s really funny how people perceive you, and how you perceive yourself and how you feel.

TrunkSpace: In the case of auditions, so much of how you’re perceived takes place within the matter of seconds, correct?
O’Brien: Yes, and I think a huge part of it is that I’m a tall brunette woman that has a lower registered voice, and I guess maybe by comparison to a lot of the women I know, I do have some confidence and some gravitas, or at least I can fake it. I’m working on it. I’m working really hard at building that side of myself and really owning it. I guess that maybe it’s showing up.

TrunkSpace: Does acting help with that? Does portraying other people force you to take an outside perspective of yourself at times?
O’Brien: Yeah, totally. It’s sort of like there’s a feedback loop that happens where you get these jobs that freak the shit out of you, and therefore you need to work on yourself so that you can show up and be a great actor and be open and available. Then by proxy you grow, and you grow as a person, and then you get even bigger roles and better roles, and it just kind of constantly gives you more opportunity to work on yourself. I never feel like I’ve arrived and I’m now super confident and “I got this!” There’s always challenge. It’s a great opportunity for me to work on my inner life.

TrunkSpace: Going back to “Take Two,” one of the things that the showrunners are well-known for is creating characters who are great at bantering back and forth. Will that be an element of this series as well, and does that make tackling a character more interesting when you get to own strong dialogue?
O’Brien: Hell yes! Tons of great banter, and very clever, witty scripts. Definitely. 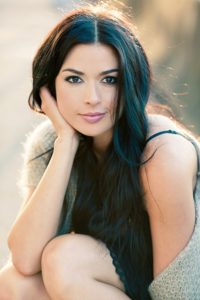 It definitely makes it more fun to do and I think it feels quite natural for me because I am a bit sassy in real life. This character just sort of feels like I stepped into it and it felt like a glove – it wasn’t like I had to do any work. It was like, “This is pretty much me.” I enjoy it very much.

TrunkSpace: So now that the premiere date is only a few weeks away, is it a nerve-racking wait to see how it will be perceived?
O’Brien: You know what, no. Maybe when we get closer to it it will be nerve-racking, but in my life right now, I’m pretty surrendered to whatever is meant to happen will happen. Obviously I’d love for it to go a lot of years. I have a plan where I’m going to live in Bali part-time and do the show and do some other stuff. I’m going to spend at least a couple of months a year in Bali. That would really help out my plan. (Laughter)

I go with the flow, and if it didn’t work out, then I would come up with a new plan. I’m sort of one of those people though that does tend to, if I’m going to be nervous, it’s like right before. When we’re down to the wire, then I might be nervous. Otherwise, I don’t get excited about a trip usually until I’m on the plane.

TrunkSpace: So you’re the person who is game to get on the roller coaster, but then when it’s ticking up and ready to go, you start to panic?
O’Brien: Kind of, although usually, because I love crazy shit like that, I’m like, “Oh yeahhhhhhhhhhh!” I scream, but I secretly just love it. (Laughter) I am that person that leaps and then is like, “What the fuck have I done?” But it’s too late, which is good. (Laughter)