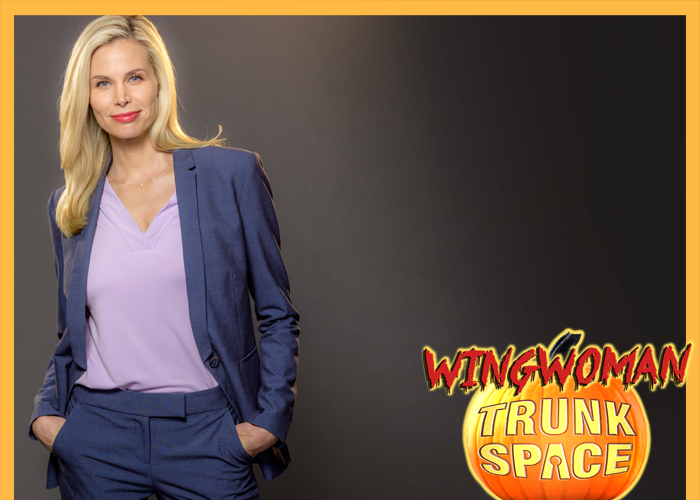 We recently sat down with Burns to discuss what drew her to Maggie, what it’s like performing opposite the writer, and why unplugging from the real world means plugging into “Gourmet Detective.”

TrunkSpace: This is the fourth time you’re tackling Maggie Price. Does it start to feel a bit like you’re shooting a television series as opposed to a standalone film just because of the episodic nature of it?
Burns: Definitely. We’ve talked about that a bunch over the course of it. Honestly, we have so much fun on set and we love each other – we just all get along so well. We’re like, “Just make it a series already!” (Laughter) It feels like we’re already doing that, you know, with the different story lines, but right now, we’re still following the Peter King books.

TrunkSpace: Doing them as films must allow for a bit more of an individual character journey though. As a series, the arcs tighten up or they end up being spread out over multiple episodes.
Burns: That’s true. Definitely, we’ve been able to explore a little more individually, which is nice to be given that opportunity, for sure.

TrunkSpace: What was it about this particular installment, “Eat, Drink and Be Buried” that excited you from a performance 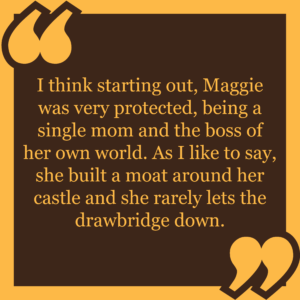 standpoint?
Burns: I think starting out, Maggie was very protected, being a single mom and the boss of her own world. As I like to say, she built a moat around her castle and she rarely lets the drawbridge down. And I think that with Henry, as they’ve slowly come closer and closer together, she’s really learning to trust someone. And it’s both scary and also refreshing at the same time.

So I think we see a softer side of her, or at least the struggle between being vulnerable with someone and still kind of being her own boss.

TrunkSpace: Is that because there is more of a personal relationship between Maggie and Henry as opposed to just a professional one?
Burns: Exactly, so that turn has been interesting because it’s like, “Wait, what does this still look like on the job?” And just because we’re now dating, it doesn’t really mean that these aspects of the job change, but in a way they do. And once you care about someone, then things start to evolve. But I think intimacy probably scares her a little bit, and at the same time, she wants it.

So those are kind of fun things to play with – all the different layers of comedy and tragedy.

TrunkSpace: Your costar Dylan Neal is also the writer. As you’re shooting, are you continuously massaging dialogue while in scenes and seeing if different things work that weren’t originally on the page?
Burns: Oh yeah. I think for us, as actors, it’s so wonderful to constantly have the writer on set. If you have any questions, you’re like, “Hey, do you mind if I tweak this?” or, “I feel like this is more natural for my character.” But Dylan and Becky (Southwell) have a really good handle, I think, now especially going into the fourth, of our voices, so they’re usually pretty spot on.

But I do, just for fun, always go, “Who wrote this? It’s terrible. Wait, I have to say what?” (Laughter) And he’s like, “Oh, stop it.” (Laughter) We pretend like we’re talking amongst the actors and then we’re like, “Oh wait, wait… you’re the writer too.” We give him a hard time.

TrunkSpace: A good moment to rib him is every time he has a really great line. “Hey, why do you get the good line!?!?”
Burns: (Laughter) Any time I have a good line, I’m like, “Oh, Becky must have written that.”

TrunkSpace: While you guys are still working and massaging the script throughout production, you’re also working within a pretty breakneck schedule, which one would imagine means you’re constantly full steam ahead.
Burns: 100 percent. I feel like they get shorter and faster every time. It’s a bit of a circus trying to make it through to the end. (Laughter) This one was even more challenging for me because I was breastfeeding a six-month-old-baby. “Wait. Put the costume on. Take the costume off. Okay, is the baby good? Okay, wait.”

TrunkSpace: Doing anything with a six-month-old at a breakneck speed is a feat in and of itself, never mind shooting a movie.
Burns: Yeah, it was definitely a challenge this time. I felt like I had two full time jobs.

TrunkSpace: Hallmark Movies & Mysteries, as well other Hallmark original programming, have a really large, loyal fandom, which I think takes a lot of people by surprise. The groups online that follow these individual shows and franchises rival those that follow science fiction franchises known for their rabid fan bases.
Burns: Yeah, that says it perfectly. I took my eight-month-old to the zoo a couple days ago, and a woman passed me by and then she came running back and she goes, “Wait! You’re the Hallmark girl!” (Laughter) “Is that my title now? Oh, okay, good. Thanks for telling me.” (Laughter)

TrunkSpace: It seems that, given the seriousness of the news every time you turn on the television, that this type of feel-good entertainment is the perfect form of escapism.
Burns: Definitely. I think that’s true. I mean, I know that for me, with all this scariness happening, every day I wake up I just go, “Do I really want to turn on the news?” I’m actually scared to go, “What happened now in the 12 hours that I’ve been unaware of the world?”

I’m sure if you have children or you just are trying to unwind, the news gets really overwhelming these days. Unfortunately it’s so sad and heartbreaking that a little love toward your heart feels good.

TrunkSpace: What was the biggest creative draw for you regarding the overall “Gourmet Detective” concept and character journey when the project was first presented to you?
Burns: You know, it’s interesting… I think that the older I’ve gotten, and definitely being a mom, I feel like your brand starts to evolve over time. And I just love, as you just said, that feel-good, family viewing. I know there’s a lot of stuff that people do as actors and they’re like, “Oh yeah, my kids can never watch anything I do, nor would they want to,” and so I think there was just a part of that where I was like, “It just feels clean and easy to go and be a part of something that is, really, like a family.”

Their brand is really how they run their shows and their sets. Going in having to do it this time with a six-month-old, I just thought that there was no way they were going to be able to accommodate all of the extra bells and whistles that I was going to need to stop every three hours – to be able to breastfeed, to be the kind of mom that I want to be, and get the job done. And they were like, “Okay, okay. Yup. Sure. No problem. Done. We’ll get you the driver with the car seat. We’ll get you the time that you need. We’ll shoot a different direction so that you can be with the baby, get her down for a nap, whatever.” Who does that? People who really understand family values.

And Maggie, in it of itself, was always great just as far as the character and falling in love with her. I loved that she was this sassy cop and at the same time, this loving single mom, and sort of the juxtaposition of those two things and having to balance the two.

TrunkSpace: Looking over your career, is there a character that you wised you got to spend more time with and explore further?
Burns: Definitely. The character of Kathy Dinkle from “Pepper Dennis.” We were only on for a season and it was kind of one of those things where Warner Bros. was caving under and we were up against the writers’ strike and the studio shifted. But definitely, the character of Kathy Dinkle was a really fun character for me that I created out of my five-year-old daughter and my mother mushed together. That was always something that I wished I had a little bit more time to continue to explore just because she was a lot of fun for me to play. 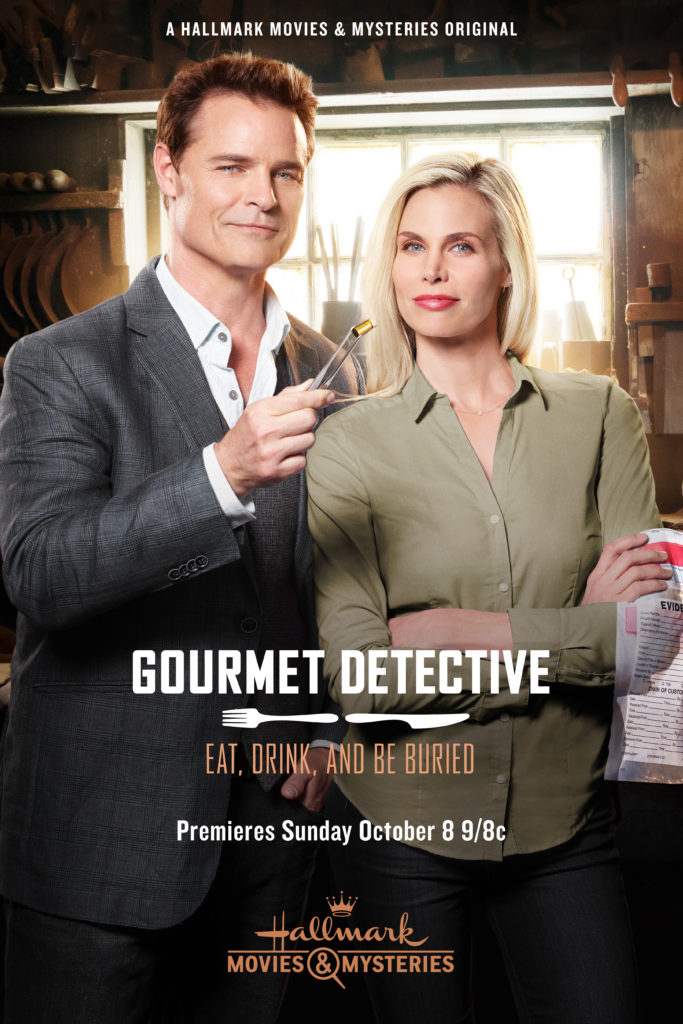