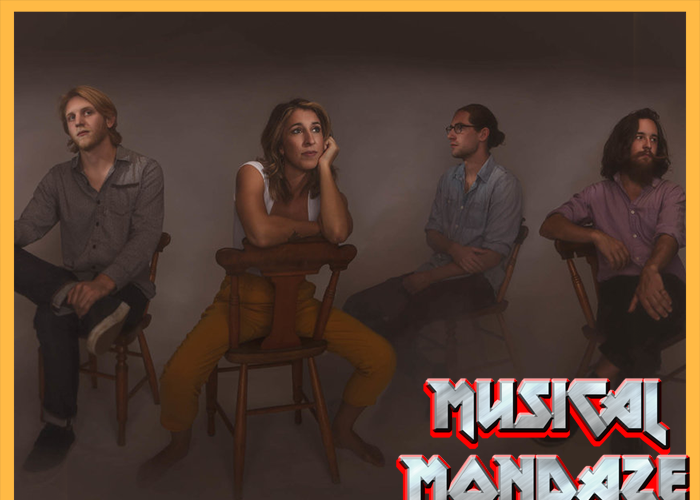 Meeting at Berklee College of Music and cutting their collective teeth busking on the streets of Boston, the foursome that eventually became Damn Tall Buildings feel the least alone when they’re together and playing music. After a brief hiatus of physical separation, the talented musicians moved to Brooklyn, New York together and altered their focus, which rekindled their creative ambitions and lead to their latest album, “Don’t Look Down,” released independently on June 7.

“If that togetherness shines for you in the recordings then you’ve gotten a pretty good glimpse of who we are,” the band stated in an exclusive interview with TrunkSpace.

We recently sat down with Damn Tall Buildings to discuss “all” the feelings, finding an artistic connection with each other, and why striking a balance between self-care and self-sacrifice is so important.

TrunkSpace: Your new album “Don’t Look Down” dropped last week. What kind of emotions do you juggle with as you gear up to release new material into the world?
Damn Tall Buildings: ALL THE FEELINGS. It’s a real mix of excitement and anxiety. We’re really proud of this record and that has been stoking the fire pretty intensely. A wonderful and new-to-us aspect of this project is that the recording and a large chunk of production/distribution was made possible by two-hundred-odd backers on Kickstarter. The generosity of these fine folks refueled a desire to reach beyond the stage and do our utmost to bring everyone who’s ever been there for us a piece of our spirit they can/will want to carry with them.

TrunkSpace: What were the creative goals when you first set out to tackle the album, and now that you have some separation from it, would you say that you were able to put a check in every one of those boxes?
Damn Tall Buildings: One example of the things we faced early on was the task of finding/building/recording sonic worlds for each song, and balancing them inside this eclectic universe of an LP. It felt like Dan (Cardinal) of Dimension Sound Studios became our fifth member during the process of creating this album, and the end result feels continually good to us, which we’re taking as a good sign.

TrunkSpace: For those who are not yet familiar with the band, if they were to listen to “Don’t Look Down” for the first time, what would it tell them about who Damn Tall Buildings is as a band? How does the music itself represent its members as human beings?
Damn Tall Buildings: Our live performance is chalk full of unbridled honesty around one mic, and Dan captured that spirit masterfully. The 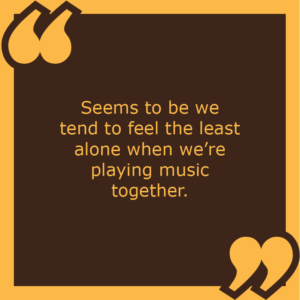 album is home to a lot of collective truths of ours and is an honest capturing of who we were when we recorded it. Very much like how every live performance of ours is an honest display of who we are then. In the end, we’re a family. Seems to be we tend to feel the least alone when we’re playing music together. If that togetherness shines for you in the recordings then you’ve gotten a pretty good glimpse of who we are.

TrunkSpace: What are you most proud of with the album?
Damn Tall Buildings: The fact that we made it! It exists! It had been a few years since our ‘15 EP and all that time and life built up pressure to the point of us saying, “We either make this record, or we reconsider the future of the band,”

TrunkSpace: The cover art for “Don’t Look Down” is very compelling. Can you talk to us a bit about how that all came together and ultimately carried over into the visual branding for the singles as well?
Damn Tall Buildings: We had the pleasure of working with Scott McCormick down in CO. He’s the creator of some of our favorite album art (Gregory Alan Isakov, The Infamous Stringdusters, Mandolin Orange), and the idea that transformed into our cover art was among the first he’d mentioned to us. The imagery pays homage to an age old Chinese myth of Wan Hu, the first “astronaut”. The tale tells of a sixteenth-century official who (as told by George Edward Pendray/quoted on Wikipedia): “Wan decided to take advantage of China’s advanced rocket and fireworks technology to launch himself into outer space. He supposedly had a chair built with forty-seven rockets attached. On the day of lift-off, Wan, splendidly attired, climbed into his rocket chair and forty seven servants lit the fuses and then hastily ran for cover. There was a huge explosion. When the smoke cleared, Wan and the chair were gone, and was said never to have been seen again.”

We’re tickled by this example of someone who took their loftiest goal and literally shot for the stars. It feels very akin to our decision to make this record and our keen desire to do it “right” (up to our standards). Scott’s deft creativity has given the album a visual anchor that we are as proud of as we are of the music.

TrunkSpace: The band is based in Brooklyn but you got your start busking on the streets of Boston. How did that city and its scene influence the band and shape you into the artists that you are today?
Damn Tall Buildings: We all came to Boston for college (all four of us attended Berklee College of Music), but busking together is mainly what helped us find our creative voices. Boston made for a great incubator, and everyone we met during our time there has played a huge role in shaping us as players, performers and people. We are lucky enough to still get to make music with/along side some of our oldest Boston friends & influences (Twisted Pine, The Western Den, Lula Wiles, Honeysuckle just to name a FEW). In addition to band family, places like Club Passim, The Burren, Cantab Lounge, Club Church (RIP) became homes to us while we’ve grown into our current sound. As a band, growing up in Boston taught us that true friendship and being true to yourself are two vital ingredients for success, no matter where we find ourselves.

TrunkSpace: Between Boston and Brooklyn, you all went your separate ways for a bit. Did that absence make the creative heart grow fonder? When you came back together, did it make even more sense than when you first started out in Boston?
Damn Tall Buildings: Our separate ways were physical/goal-based, which is to say we were still gigging on weekends, sometimes every other week for months at a time. Still, the creative heart did grow fond as we found it continuously hard to connect while only seeing one another for shows. New songs came floating to the surface during this stint and kinda demanded to be made into a record. Deciding to move to Brooklyn together and re-tuning our collective focus in ways we hadn’t since our early days certainly rekindled our creative fires, and made it possible to make the recordings we’d been dreaming of.

TrunkSpace: What is it about being in a band – and this band in particular – that you can’t achieve in a solo capacity? Are your artistic fires fueled by the creativity of those around you?
Damn Tall Buildings: Absolutely. There’s an undeniable something that happens when you connect with someone. It’s like coming to a profound understanding for the first time. Your blood pumps just a bit better for a moment, and your whole body feels like it’s buzzing on a new frequency. The four of us definitely feel that buzz when we play and the vibes are so multiplied together, it often becomes infectious.

We are RICH with people around us who share their gifts with us. We wouldn’t be who we are today without getting to explore our art with our musical family.

TrunkSpace: What is the most difficult thing about being a working musician in 2019?
Damn Tall Buildings: (Laughter) Probably staying healthy. Mentally and physically. Often spiritually. This profession takes a toll on all three and sometimes it’ll take folks out when they’re not lookin’. This is a big one because every performance is a gift to the audience. Whatever you’re feeling most inside you when performing will inevitably be directed outward. Healing can turn to poison if the doctor stops caring. So we’ll say the most difficult thing (and what we’re always navigating here at DTB HQ), is finding the balance of self-care and self-sacrifice that can sustain the level of experience that we and our fans have come to expect from our work as a band.

TrunkSpace: Time machine question. If you could jump ahead 10 years and get a glimpse of what your career looks like a decade from now, would you take that journey? If not, why?
Damn Tall Buildings: If we could take the journey and didn’t like what we see could we go back and change things? Even so, probably not. About four years ago a musician friend that we all respect told us that the best years of his career were living in a shitty van and playing rooms for however many people, so we have taken that as creed. We’re trying to embrace every bump of this ride as we go, and carry that creed forward to bigger and better things, no matter the journey.

“Don’t Look Down” is available now.