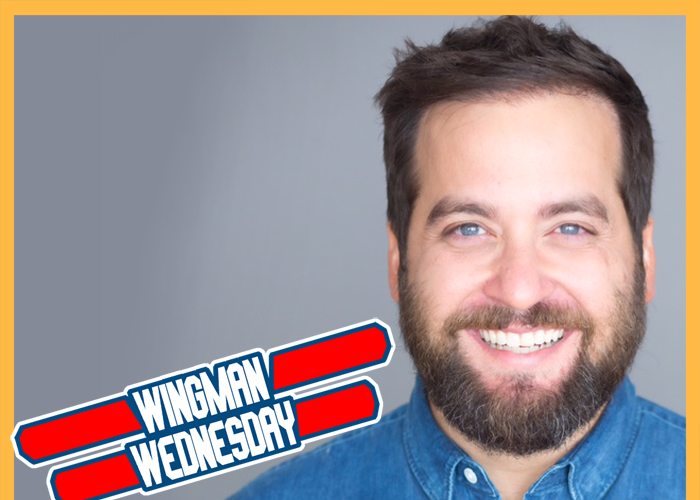 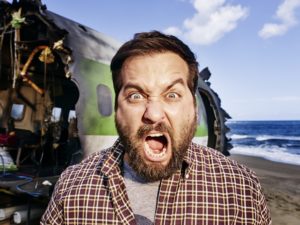 He’s often the straight-faced everyman of the island in the TBS series “Wrecked” but Brian Sacca is so much more. With a warm comedic delivery that rivals that of John C. Reilly, he has the kind of impeccable timing that can elevate a joke and an entire scene. As a writer/producer who broke into the industry as part of the comedy duo Pete and Brian, the dual-threat of creativity has seen all sides of a joke, building the fundamentals (funnymentals?) for a long career of making audiences laugh.

We recently sat down with Sacca to discuss the current TV landscape, what makes a show funny, and… vampires?

TrunkSpace: TV is an amazingly abundant place right now for quality content. What side of you is more exited about its potential, actor Brian or writer/producer Brian?
Sacca: That’s a great question. I put it this way, writing and producing is incredibly satisfactory. The ability to create an idea and cultivate it and see it come to screen is unmatched. That said, acting is so much easier. You get to go and say your lines and be funny and eat a lot of food. It’s fantastic. (Laughter)

So I have two answers to that question. I love where TV is at right now because there are so many great shows out there and I’m very proud and happy to be a part of “Wrecked.” I love to be able to shoot with my friends for two and a half months every year and I want to continue to do that and work on other shows as well. But, I’m very excited about the writing aspect. In fact, I just finished developing a new idea that I’m going to take out very soon. A lot of the work I do in writing is also in features and I have a feature that is right now going into production in the fall, so I’m very excited about that too.

TrunkSpace: Perfect timing!
Sacca: (Laughter) Exactly. I am just excited that there’s just a lot of content being made right now. There are so many of my friends making great stuff and it just makes me happy.

TrunkSpace: And what’s great is that it’s not really restricted anymore by any sort of time frames. Yes, there’s still a TV buying season, but really, you can a new series out whenever now.
Sacca: Exactly. If you have an idea that works, just go take it out and see if people like it. And if people don’t like it, you can create another one. I feel lucky that this is happening and that I’m 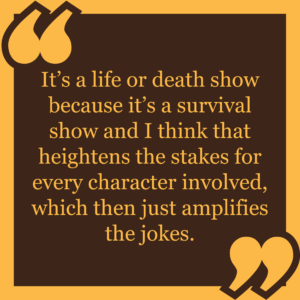 TrunkSpace: It’s funny how it has played out because there was a time when it was sort of looked down upon for actors to work in TV and now everybody wants to act in television.
Sacca: You know, there’s an interesting other side to that too, which I hear a lot of actors in LA talk about. Now that everybody wants to work in TV, including big stars, it’s a lot harder for an up and comer to get work or a seasoned character actor to get work. I can’t tell you how many times I’ve seen a breakdown for a role and I’m like, “I know that some big movie star is going to come in and want to play this role.” It happens every time. Because it’s like, why not do TV? There’s so much amazing drama out there that everybody wants to be a part of and experience. I get it.

TrunkSpace: So on the comedy side of things, being a comedy writer yourself, did it take some getting used to on “Wrecked” to work within that medium from somebody else’s script? Did it take some discipline to not dive in and rework things?
Sacca: Well, I think I’m lucky in the fact that on “Wrecked” the Shipley brothers, who are the showrunners and creators, welcome that kind of feedback. I would say almost all of the actors on the show are also writers or perform in some other comedic aspect and so in a weird way, it’s almost expected that we’re going to come there with ideas of our own and jokes of our own. There are so many moments where we come into a scene and it’s one thing and then all of the actors start doing some stuff and it totally shifts into another thing. Luckily the Shipley brothers are super supportive of that and encourage it. But also, they know that if we’re taking the scene into a crazy ass different direction, they’re going to pull it back and be like, “Hey, we need THESE lines here.” And we’ll be like, “Okay, we’ll say those lines, but then we’re going in this crazy direction.” (Laughter) So it’s fun.

And TBS is supportive of that too. In the first season, there was a bit that I did in one of the later episodes where I twirled a fake gun like a gunslinger… an invisible gun. It wasn’t in the script and I was like, “This will be a fun thing to do.” I did it, a small version of it, and Zach Cregger was like, “You have to do more of that. Do this!” And then the Shipleys came over after another take and they were like, “You should do this and this and this.” And it just kept going on and on. And to be honest, when we were doing it I was like, “Is this even going to make the cut?” It was so long. We were doing takes where I’d be doing that for a minute and a half. And then TBS saw it and loved it and they were like, “We’re going to give you guys an extra minute just so we can have all of that bizarre gunslinging.” (Laughter) So, everybody is pretty supportive of the collaboration. 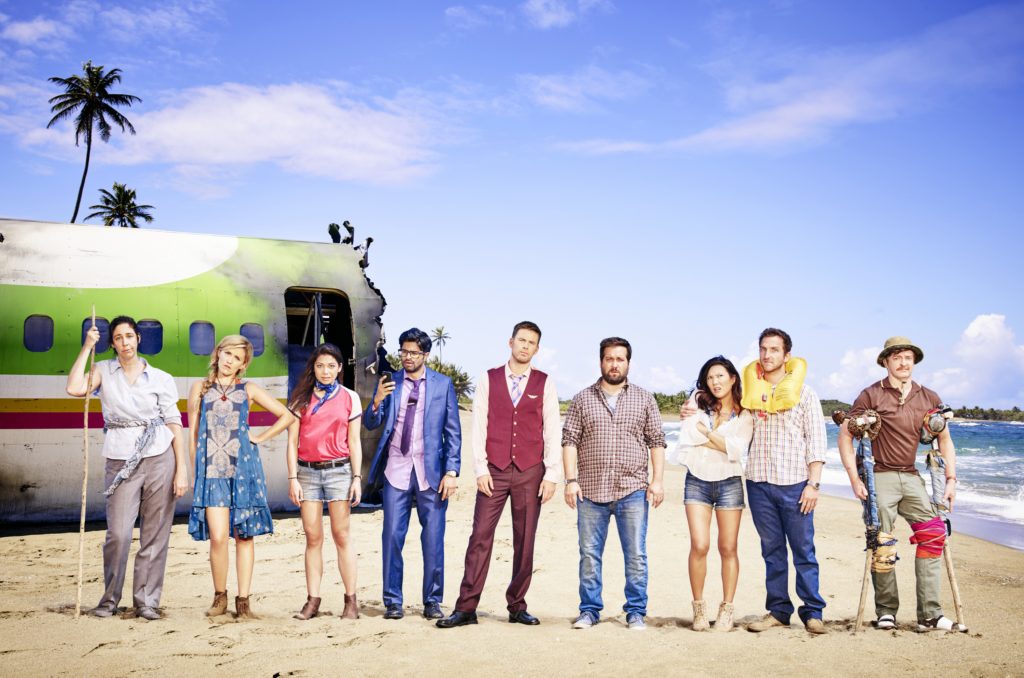 TrunkSpace: Do you think a show like “Wrecked” could have existed on television when you moved out to LA in 2007?
Sacca: No. And I think it’s because, especially in 2007, it was the height of unscripted. It was when unscripted was blowing up and every network was like, “Why are we going to spend money on scripted shows when we can make something for a quarter of the cost that gets big numbers.” And I think “Wrecked” was a risk for TBS to greenlight. It can be seen, especially in the first season, as being heavily connected to “Lost.” People even said it was a parody. It shifted away from that and just became a survival comedy. Obviously there’s still connections to “Lost” or “Lost Boys” or “Gilligan’s Island.”

TrunkSpace: Season 2 has taken a dramatic turn!
Sacca: (Laughter) Exactly. They were like, “We got the survivalist demo. Now let’s get the vampire demo and then maybe we’ll go zombies!”

But, I remember the TV that was getting greenlight at that time and it was also the recession so networks didn’t have the money that they have now. I would have been surprised if something like this got greenlit back then. Looking at the comedies that were on then, they were the safest comedies.

TrunkSpace: What’s nice now is that it seems like networks give their shows a bit more time to grow and develop an audience. And maybe that’s also a sign of the times with there being so much content on the air.
Sacca: Right, which is exciting too. That’s another thing that I feel very grateful for with TBS. For basic cable we had really great numbers last year. Maybe we didn’t have that kind of social media, crazy engagement stuff, but we still had a lot of viewers and I hope that we can retain a lot of those viewers. TBS is like that with all of their shows. They’re behind them and they’re building a brand of different comedy.

TrunkSpace: So again, going back to the idea of comedy, what is it that resonates with an audience… is it finding the funny in a situation or finding a funny situation?
Sacca: Oh man. That’s the age old question… what makes a joke funny?

I hate to not give you a straight answer, but I think it’s a little bit of both. What I like about the show and I think where comedy works really well most of the time is when the stakes are high. And that doesn’t necessarily mean life or death. It does in “Wrecked” a lot of the times, but when the character’s objective is the most important thing in the world, I feel like a lot of great comedy comes out of that. And I think you see that a lot in “Wrecked.” It’s a life or death show because it’s a survival show and I think that heightens the stakes for every character involved, which then just amplifies the jokes. And even if those jokes aren’t the most aggressive jokes… like going back to my gun twirling thing. That’s just a funny aside, but what makes it funny is that we were in this crazy life or death situation. The scene that we’re playing it in is that we’re hunting for food because we’re starving to death, so the fact that I’m doing this silly little thing within the context of this life or death situation… these high stakes… I think makes it funny.

TrunkSpace: Well, and that relates to the real world as well because when you’re dealing with something heavy, people always say, “You’ll look back on this and laugh.”
Sacca: (Laughter) Exactly.

TrunkSpace: And of course, it’s easier to laugh at other people who are going through heavy shit. (Laughter)
Sacca: (Laughter) That’s true. You can kind of say that about the state of our country right now. Hopefully we’ll look back on this and laugh. (Laughter)

TrunkSpace: Assuming we will physically be able to. (Laughter)
Sacca: Thank you. Well played.

Hopefully we will still exist in the future and can look back on this and laugh.

TrunkSpace: OR, artificial intelligence can laugh at our expense.
Sacca: (Laughter) When singularity happens, the computers will look back and have a computerized chuckle.

TrunkSpace: (Laughter) So with season 2 of “Wrecked” kicking off, what can viewers expect from the castaways?
Sacca: So we start season 2 at the exact same moment that we ended season 1. And not to spoil, but we end season 1 with some pirates coming to the island to try to find me, my character, because it turns out that I’m absurdly wealthy. So the pirates try to ransom me and it doesn’t necessarily go as planned and they… I’m not going to give away too much… but I’ll say that they decide to stay for a little bit.

TrunkSpace: Being pirates, hopefully they brought rum.
Sacca: Well, that kind of comes into play. (Laughter)

I will say that this season has a really big turn in the middle of it where things change pretty dramatically.

And to our knowledge, there are no vampires.