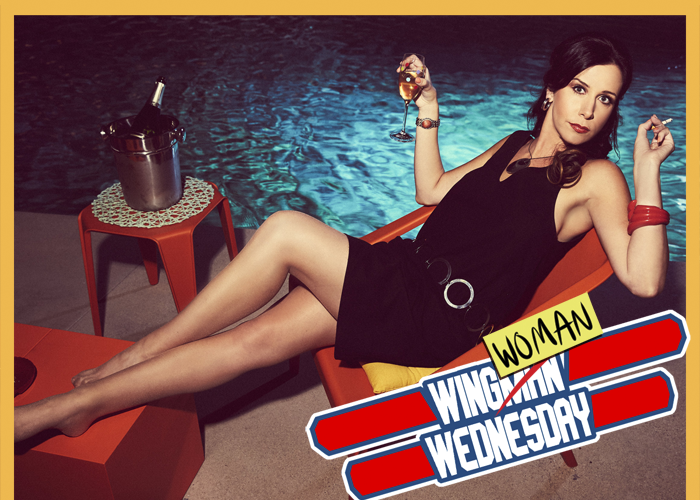 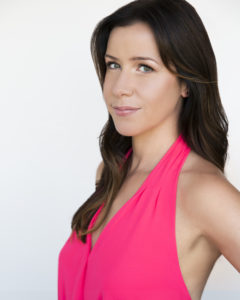 The new Paramount Network series “American Woman” may be marketed as a comedy, but there are plenty of dramatic moments throughout the course of the first season, which proved an exciting change of pace for star Jennifer Bartels. Although trained in theater and the Meisner technique (an approach to acting developed by Sanford Meisner that places emphasis on instinctive response), the North Carolina native became a familiar voice within the comedy scene, studying and performing at the Upright Citizens Brigade Theater before being cast in a reboot of “In Living Color” and serving as writer, performer and executive producer of truTV’s sketch comedy series “Friends of the People.”

With “American Woman,” a period piece that also stars Alicia Silverstone and Mena Suvari, Bartels is getting to flex dormant muscles, and relishing in the fact that her character Diana travels so far from her starting point in the pilot to where she ends up in the season finale.

We recently sat down with Bartels to discuss the need for actors to create, how she’s settling her hustler nerves so that she can enjoy the “American Woman” ride, and why she’s eager to shape opportunities for other actors in the future.

TrunkSpace: It must be quite a whirlwind for you these last couple of weeks?
Bartels: Yeah, it’s been amazing. As an actor that started out in theater and doing comedy in New York, to have this show and all the fun and buzz behind it, it’s been really awesome – really great.

TrunkSpace: What is the experience like when you’re doing a project of this size and scope, from that moment when you first slip into the 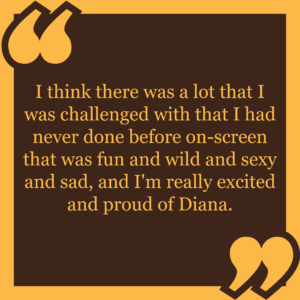 character to when it premieres? Is the wait excruciating… to get to share it with the world?
Bartels: Yeah. It was a wonderful experience. The thing is, from the conception of this show to now, it’s been, I believe, almost five years. So even when I booked the pilot and then from what that pilot was, and what Diana and these characters were, to where they are now when you see the final product… it was a really rich experience. But it’s also timely, everything we’re discussing now. It’s really nice because it’s been a work-in-the-making for years. And we wrapped in July, so it’s been really nice to finally see it take off and get promoted and have really great viewership.

TrunkSpace: When working in this business, especially before something is formally released, is it important for you to temper expectation knowing that so much of it is out of your control?
Bartels: Yeah, I feel like that’s been my personal journey creatively, which is why to me, it’s so important to be creating your own projects because at least you have control. There are a lot of actors who are actors, but I think in this climate, with social media and just with where we are, it’s great to be writing and creating and producing your own thing because it’s such a crap shoot. There’s so many elements outside of your control. From me going on an audition, to having a series go on to air 12 episodes, to a billboard on Sunset… it’s wonderful, but it’s a rarity. And then to see who’s going to like it? It’s a lot of holding your breath and a lot of ups and downs. It never goes away.

TrunkSpace: There must be something creatively satisfying knowing that you have those 12 episodes to build an audience with and not having to wait week-to-week to see if you’ll be moving forward with a storyline or particular arc?
Bartels: Yeah, that’s what is exciting right now, and I think as an actor sometimes we’re hard on ourselves and we’re always like, “What else? What are we doing?” We’re hustlers, but I think giving yourself a moment to sit in the satisfaction that it’s a solid female-driven show that, each week, will air, and that these characters really develop in a really surprising way, especially Diana, my character, from where you see her in the pilot to where she goes… it’s very wonderful and layered, so it’s exciting. Yeah, I have to check myself and go, “Jen, calm down, take a deep breath.” (Laughter) 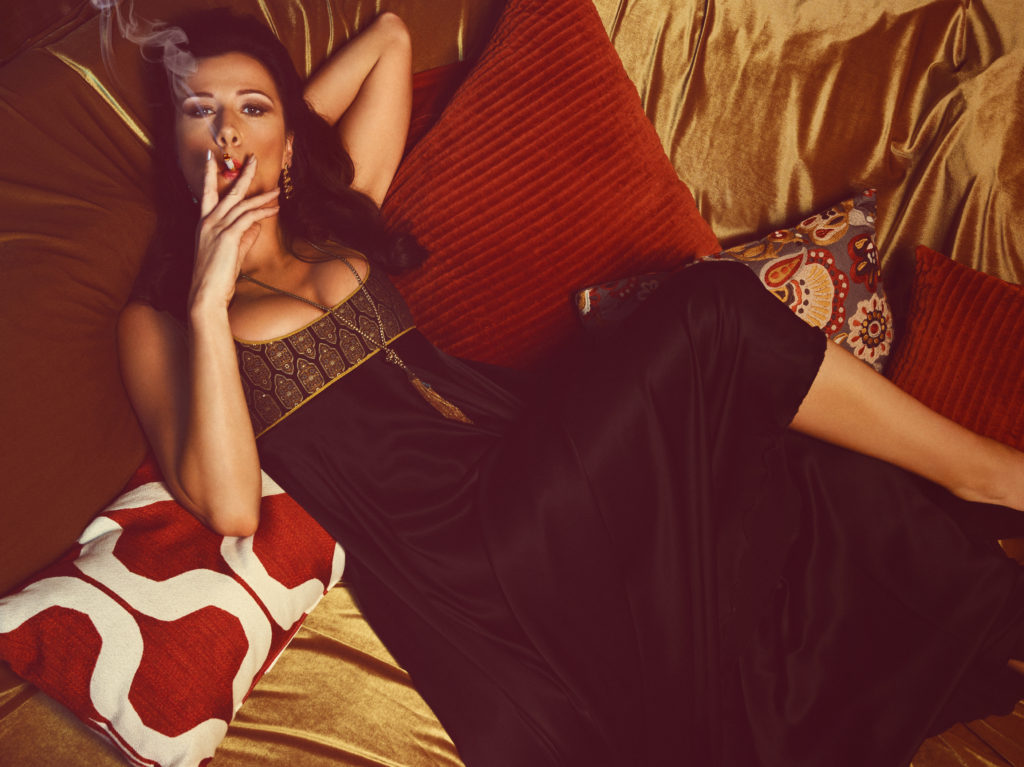 TrunkSpace: At what point can you let your guard down and just sort of say, “Okay, this is it. This is going to be my life for the next four or five years?”
Bartels: I think it’s always a struggle, if I’m being brutally honest. I think at this point everyone should be in therapy out here because it is a matter of what is enough and feeling that what you’re doing is enough creatively and professionally, because again, there’s so many cooks in the kitchen on any given project. So I’m trying to really celebrate and not let… sometimes you just have those voices in your head that… great, that’s going to make me sound totally insane… but you have those naysayers in your own head that try to get in your own way, and so it’s nice to remind yourself that if you hang with good family or friends, like, “Hey, you really accomplished something pretty rad.” So that’s what I’m trying to do.

TrunkSpace: In the current TV landscape where there is so much great television being produced, just finding an audience is a big accomplishment.
Bartels: Yeah, there really is so much competition because there’s so many avenues to watch programming, and solid programming, and so I think that’s what’s been really gratifying is, the fans, viewers. New fans, fans who love Kyle (Richards), fans who love John Wells, or Alicia and Mena… and then the ’70s. There’s just a lot of elements that different people can be drawn in by with this show, and so it’s really cool to see the first week, Twitter light up, and a lot of, especially women, but I think what’s been wonderful too is men and older folks too who really are taken back to the ’70s with this type of show… it’s been a nice array of viewership, so it is very cool.

TrunkSpace: For you personally, as a performer, was one of the draws in working on “American Woman” the fact that it was a little bit drama and a little bit comedy, and having the ability to sort of play with all of the emotions of a character?
Bartels: Yeah, I think that that’s always wonderful. I studied theater and Meisner technique in North Carolina and then I came to New York and I started doing comedy, and I think it’s a really nice thing when you have a project that allows you to flex different muscles. People are like, “So it’s a comedy?” And I’m like, “Well, it’s more of a dramedy.” There really is a lot of honest, serious social and personal issues and I think the comedy that you’re looking for when you’re like, “Oh, where’s that one liner?”, it’s more… there are funny, honest things, and to me, comedy is honesty. When you’re honest, that’s when it’s truth in comedy. So I feel like that’s what we play with, and that is finding the honesty and the comedy in real life situations and how they’ve changed to how they haven’t, then and now. 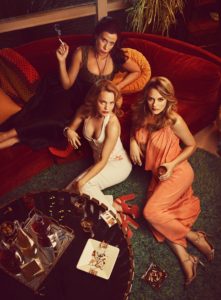 TrunkSpace: With traditional TV comedies, sitcoms, you don’t see a lot of growth and story arcs for characters, but that’s not the case with this show. You’re seeing them go through life and adjusting based on what they experience.
Bartels: Yeah, which I really actually enjoy, and like you said, it was a really nice thing to see as this story progressed and the writers were writing for us, that these characters did take very juicy steps in directions that we maybe didn’t foresee when we did the pilot. Because when you do the pilot, you think, “Oh, it’s a pilot…” You hope it gets picked up, and now I’m Episode 7 in and I’m like, “What am I about to do?” And it’s so rewarding and surprising and I think the viewers will like it as well.

TrunkSpace: You spoke about the chance to get to flex your acting muscles. Where do you feel you got to stretch the most by being a part of “American Woman?”
Bartels: I think it’s more on the serious side. I think a lot of my work in the past, my commercial work, has been… I had a sketch show and I booked “In Living Color,” so I was coming in hot with comedy. So to be given the trust with the writers and the producers to be seen as… not a serious actor, but I had more of a dramatic side to me… I think it was great and it came out in the writing as the show progressed. In Episode 3 there’s this pool scene where Diana kind of goes off the deep end, literally, and it allowed me to have some fun as I did this wonderful, rich monologue on a roof after partying a little too hard, and you start to see this different side of Diana. This not-so-buttoned-up side. And that reveals itself in like five different ways in the whole season, different ways that she starts to loosen those buttons. I think there was a lot that I was challenged with that I had never done before on-screen that was fun and wild and sexy and sad, and I’m really excited and proud of Diana. And it was so cool that people trusted me when they started seeing what I can do, and wrote more for me, so it was wonderful.

TrunkSpace: As a creative person who also works as a writer and producer, is a long-term journey with a character on-screen – going four, five, or even six years with a character – something that appeals to you?
Bartels: Well, I feel like there’s the idea of getting work to get work, or having as much as possible and seeing what sticks on a wall, but creatively for me, I prefer if it’s something fulfilling. And if Diana’s story or whomever I’m working with, playing whatever character, has a rich, fun road to walk down, I would definitely have allegiance to playing that role, truth be told. And I also think there is a lot of intense work. You shoot for three months nonstop and then you do have time allocated to creating other roles or projects. A big thing I want to do is continue to pitch and produce projects that I’m on the backend of – that I’m behind the scenes with – just to give more females and more underrepresented people roles because I feel like that still needs to happen. I feel like we branch out, but we still kind of use the same few people. There are just so many talented people I know that need that opportunity, that was in a way given to me, and so I think if I could help create and give back, that’s kind of what I want to do. But I think they can both go together. I can still be on the journey with Diana, or whomever else, and keep creating on the side.