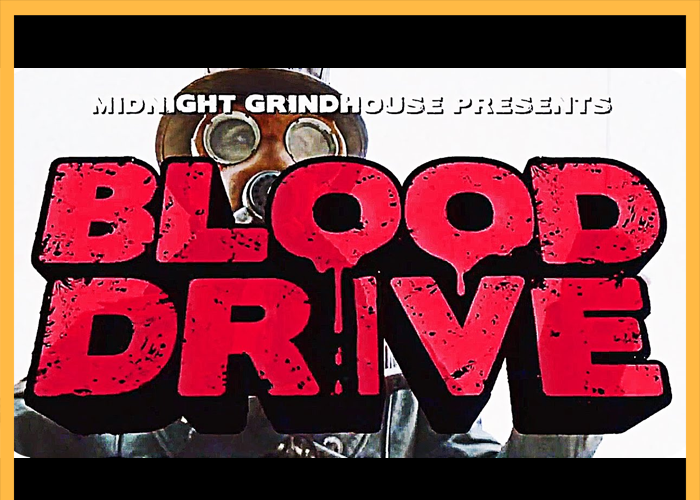 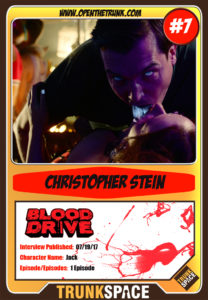 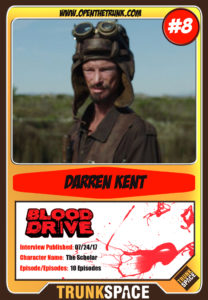 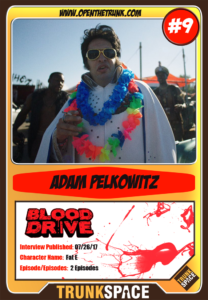 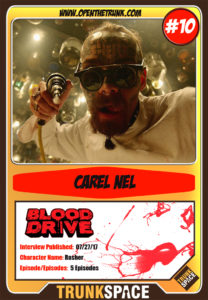 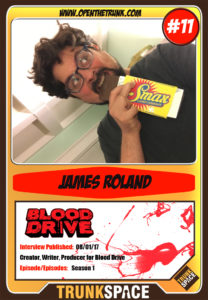 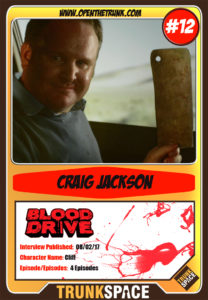 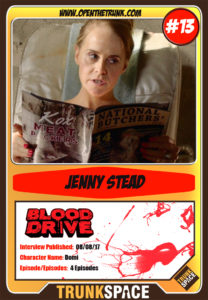 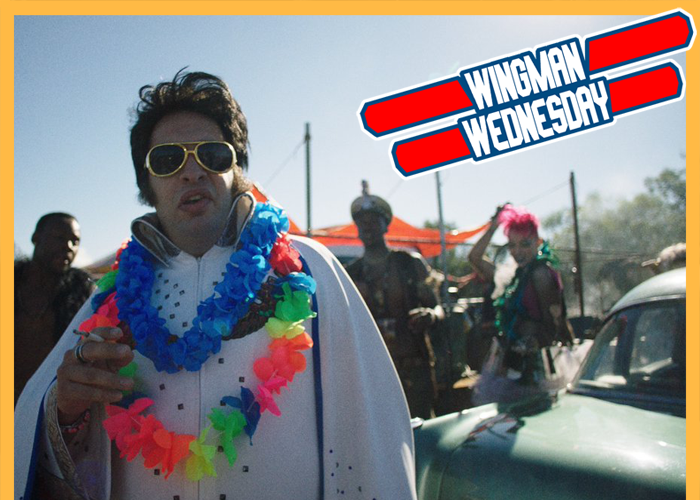 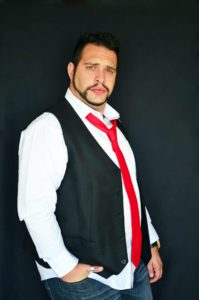 When it comes to capturing the hearts and minds (and appetites) of audiences, the size of the part isn’t what matters, it’s the meatiness of the role itself. For Adam Pelkowitz, the South African actor who portrayed Fat E on the SyFy series “Blood Drive,” meat is exactly what his onscreen contribution lead to. After stopping off for a bite, the jumpsuit-wearing racer was turned into diner “beef” and became the bite. And given their smiles, one could assume that the patrons loved him tender. (Bonus points go to TrunkSpace for flagrant Elvis joke!)

We recently sat down with Pelkowitz to discuss his artistic onscreen death, what flavor he’d be, and why the experience of “Blood Drive” will stay with him forever.

TrunkSpace: We have been asking this of every “Blood Drive” cast member we speak with because, well, it just seems like an obvious first question. (Laughter) Did you ever wonder if the material you were working on in “Blood Drive” would ever make it to air?
Pelkowitz: (Laughter) I never doubted that everything that we shot for “Blood Drive” wouldn’t make it to the air! I KNEW it would all be there. This is because of the genre that the production is based upon. Grindhouse is a very specific genre and due to its nature, it needs to have all of the elements that were shot and then ultimately shown.

TrunkSpace: Your character’s name (past tense spoiler alert) was Fat E, or Fat Elvis for those in the know. There’s been a lot of Elvi (plural Elvis) portrayed on screen over the years. What did you hope to bring to your maniacal version that audiences haven’t seen before?
Pelkowitz: Well, interesting question… I chose to make Elvis truly “Fat” (in the seven deadly sins sort of way), in essence, sluggish, ugly, morbid and totally egotistical in his own manner. I want audiences to look at Fat E and think, “Wow, this man has really been living the good life more than he actually should have.” I wanted to create a kind of “air” about him that was totally different from any of the other characters that were involved in the production.

TrunkSpace: In terms of character background, was he an actual Elvis impersonator or did he just share a similar love for sequined jumpsuits and colorful leis? 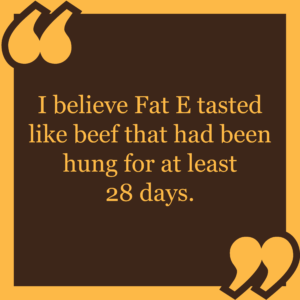 Pelkowitz: Well, when I auditioned for the role, I was asked to give a lot of the usual and generic Elvis hip swings and lip movements, etc. I chose ultimately to go the opposite route in my performance. I chose to create a different kind of Elvis impersonator who, as you say, looks and dresses like Elvis and sounds like Elvis, just with a really irritable bowel (pun intended) who is totally put off by others and is really only interested in causing trouble, smoking cigarettes, and eating burgers. (Spoiler alert!)

TrunkSpace: Shooting under that hot South African sun, were you a hunka hunka burnin’ Pelkowitz in that jumpsuit? (Yes, bad pun intended.)
Pelkowitz: I was born and bred in Johannesburg, South Africa. I am used to the weather here. Cape Town is a different story when it comes to weather. It’s humid and in the parts of Cape Town where we shot “Blood Drive,” it certainly was boiling. Lots of sunscreen and water… all in the name of good fun!

TrunkSpace: This is going to sound really weird coming out of our lips but… your death was beautiful. Legitimately, the way that your character died was shot in such an interesting way. As far as onscreen deaths go, that one has to be a bit of a badge of honor?
Pelkowitz: I totally agree with you… without sounding egotistical. I am honored to be able to say that I “died like that.” It was definitely an interesting journey. Firstly, I had to go for prosthetics, which took about two hours. I had to wax my (unfortunately, extremely Jewish hairy) chest, sit with prosthetics and weird slime being smeared all over my face and upper body, pictures were taken, etc., etc., etc. It was a whole process. Thereafter I had to have special training where I was strapped into a harness and suspended from the ceiling for no longer than three minutes at a time because being upside down for longer than that can be quite dangerous to one’s health. Aneurysms are definitely not wanted or needed. When it came to shooting the scene, it was all planned out before so that I would only have to spend a minimal amount of time upside down. The door opening and closing was an amazing touch to a very interesting day. It was really totally amazing and I am grateful to have been afforded the opportunity to “die” like that. (Laughter)

TrunkSpace: You’re also an editor and videographer in real life. Could you appreciate that entire scene, and really, most of that episode, in a whole different way knowing what went into it? There were some really innovative shots that you’d never expect to see in a grindhouse gorefest.
Pelkowitz: Absolutely! I am totally aware of what goes into these things being a videographer and an editor, but I was totally amazed at the incredible shots, the seamless editing, and the way in which everything was put together in the end. I thought to myself, “Fuck, that’s awesome!” Everything worked! I mean, it’s really difficult putting all of that stuff together. One doesn’t notice that, which is definitely a good thing because it comes across as that is how it was supposed to be, instead of one of those, “Oh, look at that animation there” moments.

TrunkSpace: Ultimately Fat E was being processed for others to get fat on. What do you think your character tasted like?
Pelkowitz: I believe Fat E tasted like beef that had been hung for at least 28 days.

TrunkSpace: The sets in “Blood Drive” are just as unique and off the wall as the characters appear. Did the environments play a role in your character development?
Pelkowitz: They always do. Obviously if you are in a beautiful restaurant with silver service, Fat E would most probably not have been as forward as to snatch the burger out of Arthur’s hand. He probably would have gotten the waiter to bring him Arthur’s plate. (Laughter) For me, the sets completely help with my Fat E character. He is as dirty and as dodgy as that diner in Pixie Swallows. 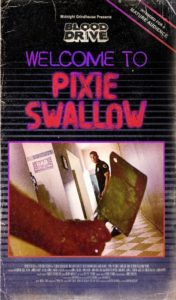 TrunkSpace: What was your most memorable moment working on the series?
Pelkowitz: Obviously working with the incredible cast that is featured on “Blood Drive.” Making friends with these incredible people. The crew and producers were amazing to work with. In essence, the entire experience will stay with me for the rest of my life!

TrunkSpace: From what we could tell, “Blood Drive” was your first big television project. How do you hope to position your involvement in what is quickly becoming a cult classic to further your own acting and professional career?
Pelkowitz: Yes, “Blood Drive” was my first major television project. Well, this is an interesting question. I live in South Africa. I have been in the performing arts industry for 12 years now having performed in many major musical theater productions as well as having been fortunate enough to be nominated for awards for some of them too. I have already sent my CV out to some international casting agents, who hopefully will see my career and become interested in what I have to offer to the world of television and the performing arts. I am definitely not leaving this here. I am constantly auditioning for new roles and new productions. So only time will tell. Luck is when preparedness meets opportunity.