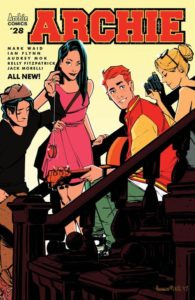 TrunkSpace: How would you describe your art style?
Pitilli: That’s always a tough one. For the longest time, I used to say it was “comic book inspired,” but now that I’m working in comics, I feel like that’s a bit redundant. (Laughter) I would say it’s sort of inky, with a combination of both loose expressive lines and more controlled ones. I try and keep it kind of sexy as well.

TrunkSpace: How important were comic books in your life growing up and is that where you discovered your love and inspiration for drawing?
Pitilli: Yeah, definitely. Comics as well as animated cartoons were the two things that inspired me to draw from a very early age. I can still remember burning through sheets of paper with drawings of Peter Pan and Batman and Robin. Comics gave me this overwhelming desire to create and tell stories.

TrunkSpace: Was there a particular artist or title from your childhood that you remember being drawn to and inspired by?
Pitilli: Oh yeah, there were a few very pivotal ones for me. I was a huge fan of Archie Comics and my favorite artist on those titles was Dan DeCarlo. It wasn’t until I got older that I realized just how influential he was on so many artists and just how prolific he was inside and outside of Archie. When I got a bit older, I was definitely inspired by the whole Image Comics style, particularly that of Jim Lee and J. Scott Campbell. Bruce Timm and his whole art deco inspired version of Batman was also super influential on me growing up. In a way, my style is almost a combination of all of those early influences.

TrunkSpace: How did you decide to approach your career in comics? Did you formulate a plan of how you wanted to attack what is known for being a hard industry to crack?
Pitilli: I came into comics in a sort of indirect kind of way. I had been working as an illustrator for editorial and advertising clients for close to 10 years before breaking into comics. Although I studied cartooning at SVA in NYC, I focused on other illustration work opportunities after graduating. At the time, comics seemed like a very overwhelming task (which they can be) and I didn’t think my skills were up to par in terms of telling a story visually. A few years ago though, I connected with an old classmate from SVA who was an editor at Archie Comics at the time and he gave me my first assignment in comics, creating cover art for one of their titles. 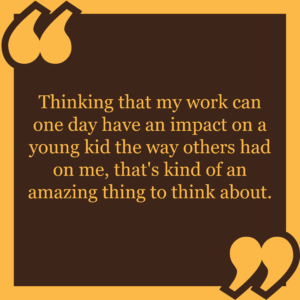 Pitilli: In terms of comics, everything I’ve done for Archie within the last few years has lead to lots of exposure as well as some cool opportunities opening up because of it.

TrunkSpace: A lot of people say that breaking into comics is the hardest part of working in comics. How long did it take you before you started to see your comic book dreams become a reality?
Pitilli: Like I said, I had already been a working illustrator before breaking into comics, and during that time I wasn’t all that concerned with working as a comic artist. Throughout my career, a lot of the projects and opportunities that have presented themselves have come out of the building of relationships with various people in the design/illustration/comics worlds. And breaking into comics has been no different. Luckily opportunities in comics have presented themselves at the right time and I couldn’t be more excited to be a part of an industry which I believe is going through a new golden age.

TrunkSpace: Is there a particular character or universe you always find yourself returning to when you’re sketching or doing warm-ups?
Pitilli: Not really. My warm up drawings and sketches almost always consists of a random female figure. During Inktober however, I am more likely to do a warm up sketch of a famous comic character. Some of my favorite Inktober drawings of mine have been Madman and Death.

TrunkSpace: Is there a specific title or character that you’d like to work on in the future and why?
Pitilli: Growing up, I was a big fan of the “Generation X” series by Chris Bachalo. I have fantasized about working with those characters, especially Jubilee. I think that would be a lot of fun!

TrunkSpace: What is your ultimate dream when it comes to your career in comics? Where would you like your path to lead?
Pitilli: I’m sort of just seeing where this whole journey takes me. I don’t really have an end goal in mind. I want to continue to evolve as an artist, work on my craft and hopefully be able to contribute artwork and stories that a wide audience can enjoy. I think as far as the genre itself goes, the sky is the limit these days and that’s really exciting to know.

TrunkSpace: What would you say is the greatest strength as an artist?
Pitilli: I was inspired by so many amazing artists growing up. So much so that it has informed my entire career path and vision as an adult. I think there is great strength in the kind of an impact that art and artists can have on others. Thinking that my work can one day have an impact on a young kid the way others had on me, that’s kind of an amazing thing to think about. 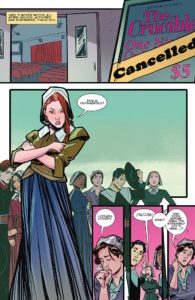 TrunkSpace: How has technology changed your process of putting ideas/script to page? Do you use the classic paper/pencil approach at all anymore?
Pitilli: Technology has been huge for my process as a comic book artist. I do all my comic work digitally. These days, the deadlines are so tight and often times my workload can be pretty heavy that working digitally is really essential. It saves so much time on scanning and sending artwork, as well as being much more convenient for making revisions when necessary. I would LOVE to be able to draw my comics traditionally, using real ink and paper, but time just doesn’t permit that these days. I use the Wacom Cintiq Companion 2 as my drawing tablet of choice. I highly recommend it. In terms of quality, nothing is lost compared to the ‘old fashioned’ way.

TrunkSpace: What advice would you give another young aspiring artist who is considering a career in the comic industry?
Pitilli: Keep at it. Comics, like all other artistic professions, require a lot of dedication and consistency to not only the craft itself, but the self promotion aspect as well. Also, learn how to best manage your time. Comics is a deadline-based job, so if meeting a deadline seems challenging for you, practice how to best utilize your time while creating art. I’m constantly trying to find ways of being more efficient. The guy or gal who always meets their deadlines and is pleasant to work with will always get more work than the ultra ‘talented’ artist who can’t seem to get the work done on time.

TrunkSpace: Making appearances at conventions: Love it, leave it, or a combination of both?
Pitilli: I did my first convention signing at New York Comic Con this past October and I loved it! I’ve never had a table at a big convention before, but maybe in the future.

TrunkSpace: What is the craziest/oddest thing you’ve ever been asked to draw as a commission?
Pitilli: Generally, I’m a bit picky when it comes to commission requests. I like to have a lot of fun when creating a commission, so that it shows through in the art and the patron is happy with it. If the request is something super weird that doesn’t interest me, I have to decline.

TrunkSpace: What else can fans of your work look forward to in 2018?
Pitilli: Definitely more “Riverdale” and Archie work. Also, I’m looking forward to finally being able to announce a super fun project that I’ve been working on. It’s an exciting one, so stay tuned! 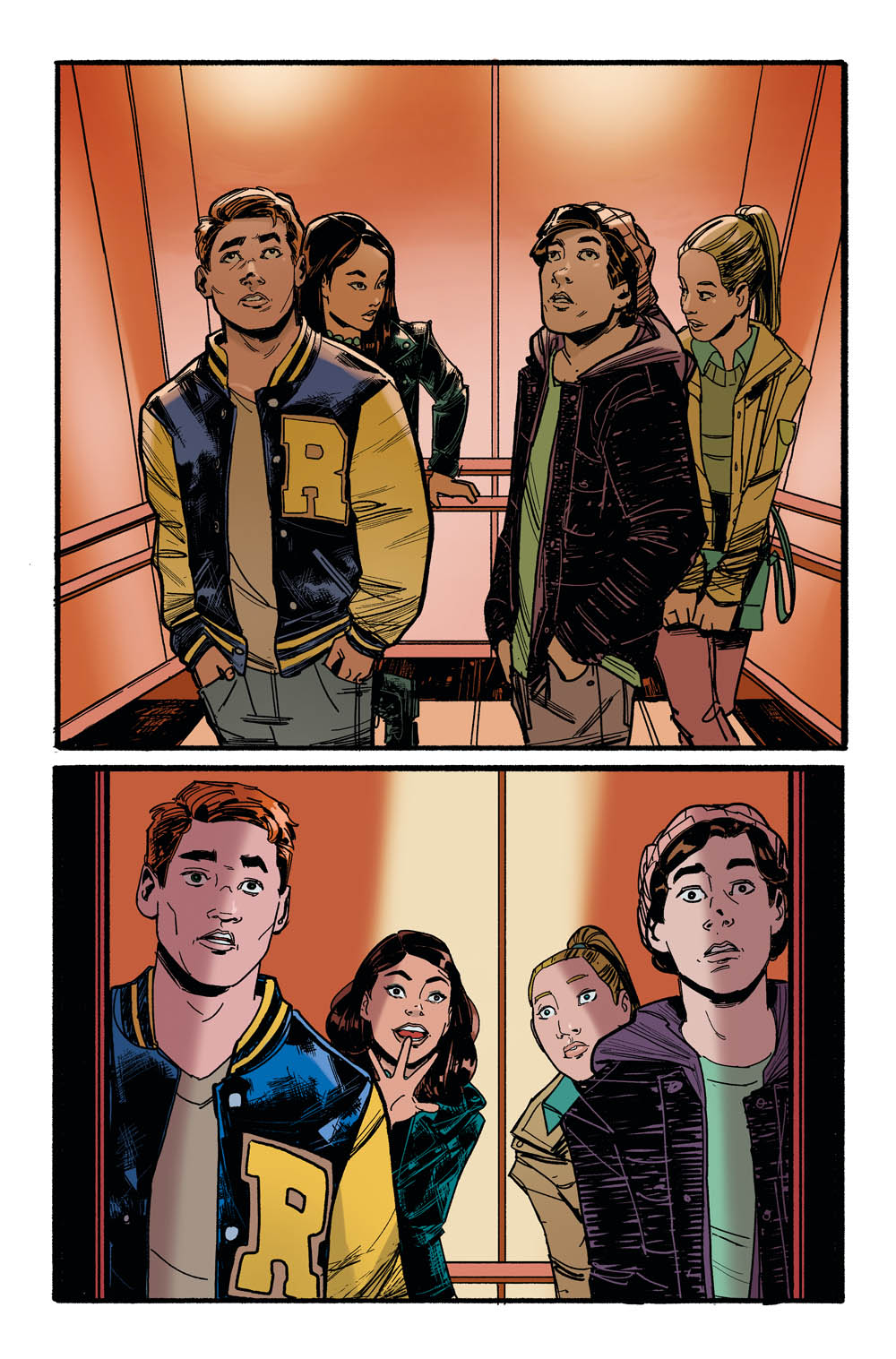