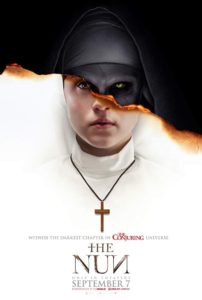 Reason We’re Watching It: If you’re a fan of “The Conjuring” franchise, you know that one of the most terrifying characters that has appeared briefly in the previous installments is the demonic nun character, so naturally we were ready to get terrified and celebrate October a little early.

What It’s All About: The story is an origin story but definitely not of the superhero variety! A priest with a haunted history and a young nun in training are summoned by the Vatican to investigate the death of a nun in Romania.

Whoah! Rewind That!: The scares were all great and horrifying to say the very least. One scene delivered on suspense and thrills when a man must walk through a slew of undead nuns that are wearing bloody bags over their heads. This scene was very reminiscent of the creepy nurse seen from “Silent Hill.” You know the one!

Watercooler-Worthy Tidbit: Vera Farmiga, who played Lorraine Warren in “The Conjuring” series, is the older sister of Taissa Farmiga, who stars in “The Nun” and is known for her roles on “American Horror Story.”