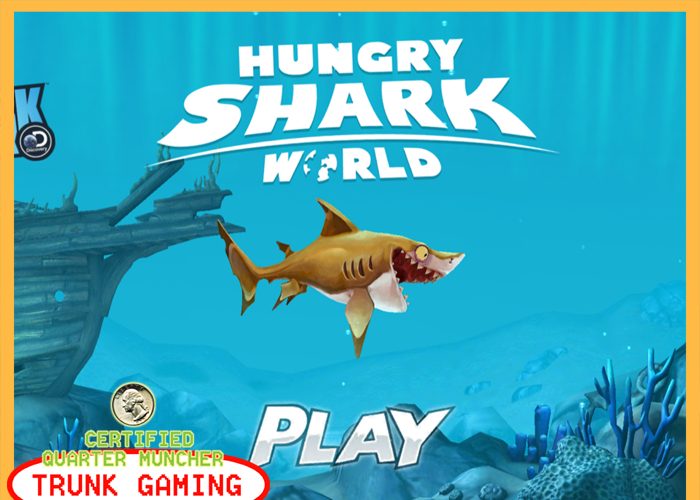 Why We’re Playing it: It’s shark week, and we wanted to celebrate by living life as a hungry digital shark!

What It’s All About: You don’t have to dig too deep on the premise for this one. You play as a hungry shark and the world is your buffet. Swim around and eat fish, turtles, pelicans and of course, tourists. #SharkLife

That’s Worth A Power-Up!: You can level up in the game and as you do, you unlock bigger, scarier playable sharks. You can even play as an angry killer whale out for revenge.

Bonus Level: The game looks stunning, even on the mobile devices. There are layers of environment stacked on top of each other and fun Easter eggs like the “SPAM” spoof of a sign that reads “SPLUM”. So in between bites keep an eye out for the hidden gems. 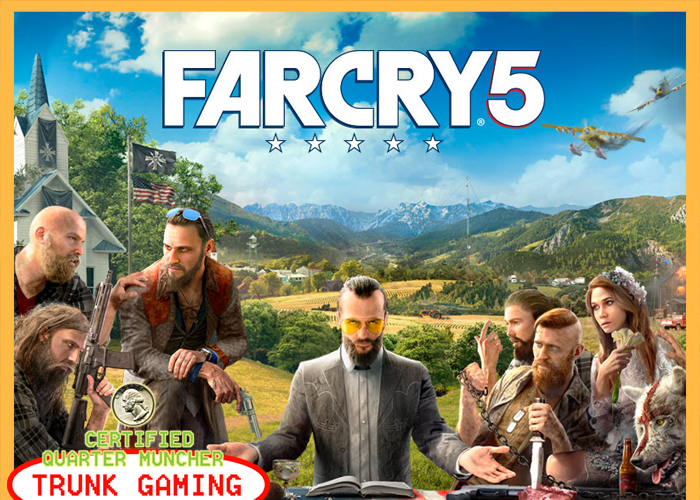 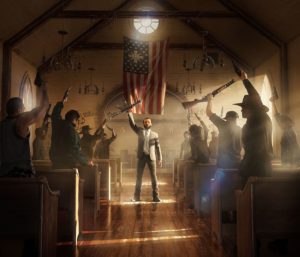 Why We’re Playing It: We enjoy our shooter games, but “Far Cry 5” has more layers than deep fried onion at a state fair. You might be liberating a camp full of cultist hillbillies one minute, then literally fishing in a lake the next. This playable experience is one of those rare instances that allows you incredible gaming freedom to fly a helicopter, plane, drive a boat, ATV, semi-truck or skydive in a wingsuit. The kicker… it doesn’t suck! What do we mean by that? You know the type of game that has you flying, boating, driving and walking, but the mechanics are just all wrong? This is the opposite. Ubisoft does every aspect of this game well, including some stunning full motion video and beautiful backdrops.

What It’s All About?: You play a deputy rookie that is riding along with veteran police forces to diffuse a hostile cult that is taking over the area. Matters are attempted to be resolved peacefully, but that would make a pretty boring game. So instead, things go up in smoke along with the helicopter you’re riding in. After crash-landing, you’re rescued by a rebel that helps you blend in undercover. You continue your work to liberate and save the innocent while helping take the area back from the cultists. 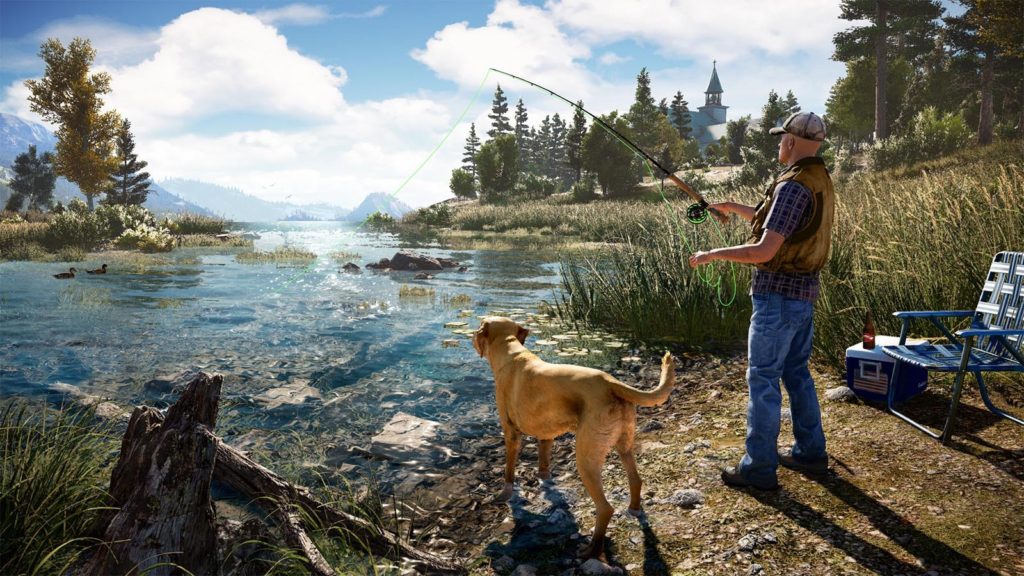 That’s Worth A Power-Up!: One of the best aspects about this installment of “Far Cry” is the vast variety. As we mentioned, you have an abundance of transportation options, but you also have a slew of weapons, power-ups and tasks that keep things interesting. If you need a break from all the gunning and blowing stuff up, kick back and relax and do some fishing, hunting or even repair a car. Just don’t keep your hand off the trigger finger while you’re smelling the virtual roses.

Bonus Level: The dialogue in this game is some of the funniest we’ve encountered since perhaps “Duke Nukem.” Had we had milk in our mouth, it would have come out our noses when a character proclaimed, “I feel higher than a Jamaican Giraffe!” So, there’s a pro-tip. Don’t drink milk while playing “Far Cry 5!” 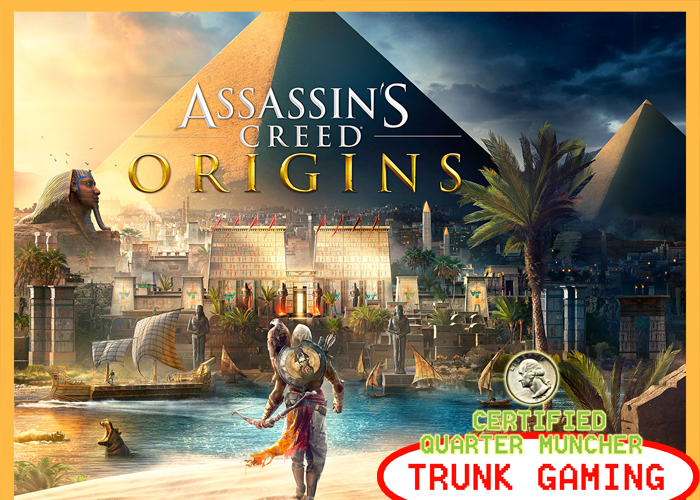 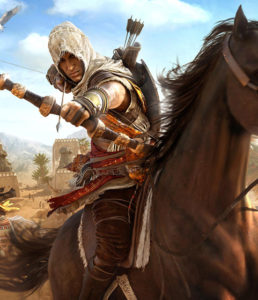 Now more than ever, there is a viciously competitive gaming market. In the old days you would wait for months for that one big name title to be released, and then everyone would rush out and buy it and live the game for months on end. In the current gaming market, you might have three or four gangbusters games released on the same weekend. This November alone, “Call of Duty,” “Star Wars Battlefront,” “Doom” and about a dozen other titles that used to be the “one” title you waited for all hit the market. This is a blessing and a curse. There are plenty of titles to play and choose from, sure, but at $60 or more a pop, how do you choose what to play without selling all of your organs on the black market to feed your gaming need? Well, TrunkSpace has got your back, and we like to let you know which games are the solid games to play – the type of games you would have waited on pins and needles for months back in the day. We’re not just slapping a number rating on our reviews, we’re looking at this game and telling you our take on it as if we were gaming-besties. This installment we’re talking about “Assassin’s Creed Origins” and spilling the beans on the gameplay with no story spoilers.

Story-wise, this game has you playing as Bayek of Siwa in Ancient Egypt. Bayek is a noble character but with a dark cross to bare. 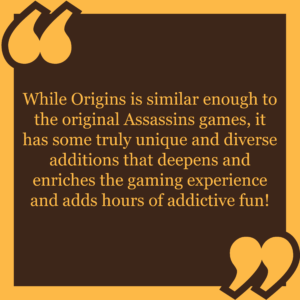 You, along with your trusty camel and eagle, navigate through a twisted world of corrupt leaders, and experience the struggle and tribulations that the lower class must endure… so it’s not that different from current day standards, but let’s not open that door. Instead, lets talk about the seamless and dynamic flow of the gameplay, the real meat of the experience to be had.

Those of you who are already trained Assassins out there from the game’s previous installments will recognize the familiar format and formula, but there are some definite derivatives from the earlier games. Origins will have you busy for hours, and you can really invest as much or as little time as you like leveling up and combining those RPG elements of the game with the action-adventure and harrowing heights that come with the story. It’s the roleplaying elements of this series that really sets it apart from the previous Assassin’s Creed games and provides a new level of addictiveness. We found it to be really engaging. You have free will, and you’re forced to decide what is right or wrong and contemplate how your actions affect the story… or you can just try and kill everything that walks, but be warned, that is a dark, digital road to travel in this gaming realm. You level up as well as your weapons, armor, etc., and that must be used to complete or achieve certain tasks.

Remember “Oregon Trail?” (We’ll pause for the kiddos to Google) Okay, now that we’re all informed, you can fully appreciate this comparison. You know how in “Oregon Trail” you had to hunt and survive off of the land and try not to die of some random disease? Well, Origins asks this task of players but in a much more in-depth way. You have to use your trusty eagle, Senu, to spot animals and navigate the vast terrain in order to hunt and help craft your armor, weapons and more. This is done so in a respectful manner, and it’s an interesting idea to ask of players to create their tools. You don’t just find a key and open a treasure chest. You hunt, loot and build your way into a better Assassin. 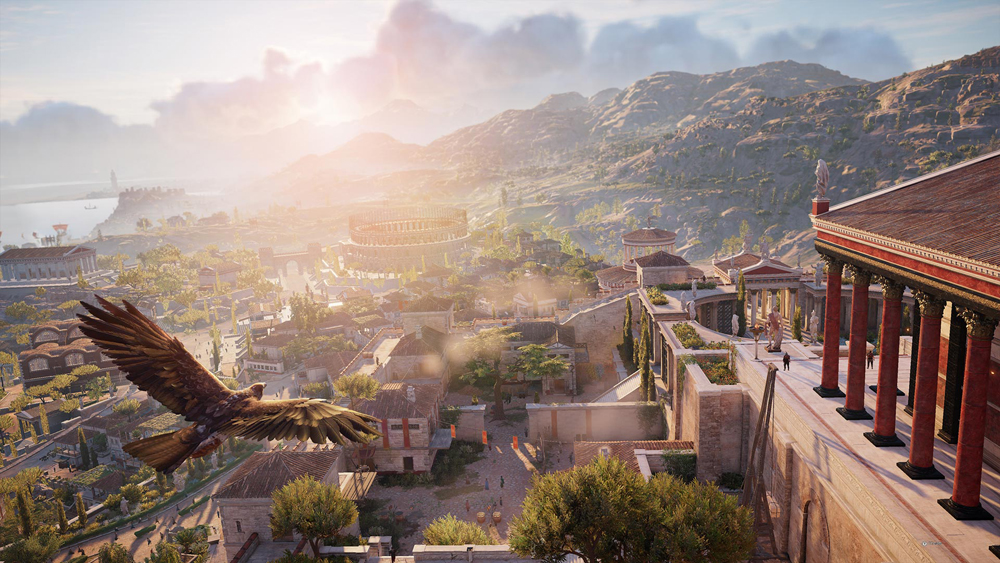 To borrow a phrase from Danny Trejo in those Sling TV commercials, if you can be picky why not be picky about your gaming? Well, Origins has you covered. There are XP based upgrades that really cater to the player’s favorite way of approaching the game. If you like to stealthily dispatch your targets, you can pick to unlock/learn those abilities that will help you achieve this. On the flip side, if you want to Conan the Barbarian it up and run into battle head first, you can build up your melee and fighting skills. We found this to be a really nice hook to the game and possibly a window into what gaming will be in the future. It’s not a cookie cutter side scroller. It’s a unique and immersive gaming experience that has you well vested in not only your character but the characters you interact with in the game. This goes back to the freedom of choice we talked about. There could be a dozen ways to take care of a room of guards. You could pick them off one by one, go straight into battle, or… maybe you set a wild animal loose in the crowd of guards to distract them while you sneak past.

The parkour element of the original Assassin games is present, of course, but it’s improved in our opinion. Before, you needed to parkour your way to an elevated spot to assess your objectives. There is no need for that in Origins, but don’t fret. It’s still a huge part of the game, and they somehow managed to make it even smoother and more fluid than ever before. Nathan Drake would be jealous of how elegantly you can scale almost anything in the game including ancient Egyptian statues, pillars, buildings and towers.

That pretty much covers the meat and potatoes of “Assassins Creed Origins.” In a gaming industry being flooded with “must play” titles each month, we can give you the Power Gloved thumbs up on this title and say it really is a “must play” and not just a rental. You’re going to want to buy this, build up your character and delve into the online aspects as well. The storyline element of the game can be completed in about 24 to 32 hours if you are just trying to play through, casually. There are easily hundreds of hours of gameplay to be had here, though, which is quite a bit of gameplay for your bitcoin! While Origins is similar enough to the original Assassins games, it has some truly unique and diverse additions that deepens and enriches the gaming experience and adds hours of addictive fun! 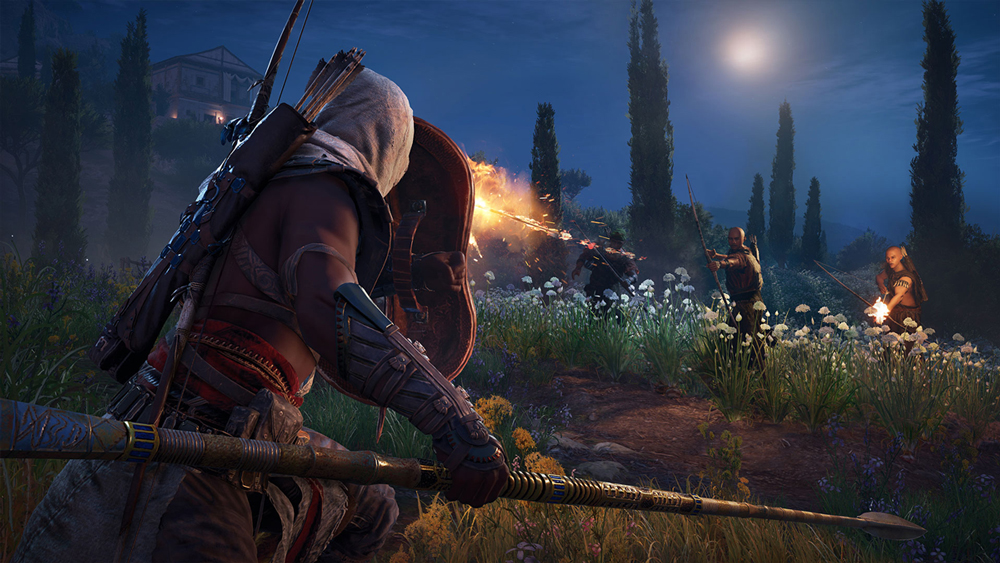