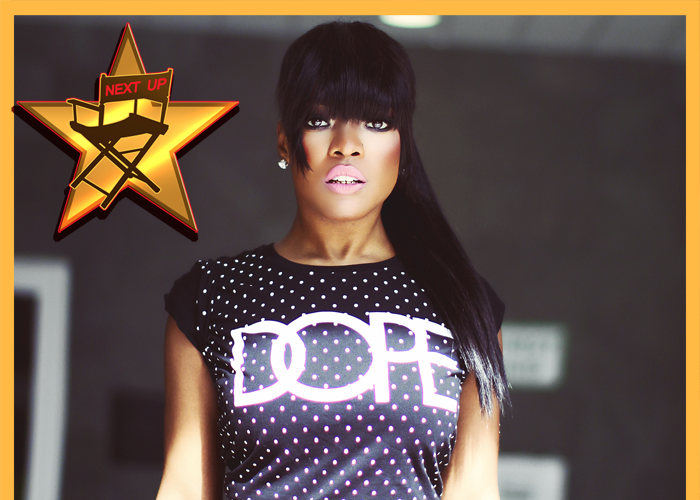 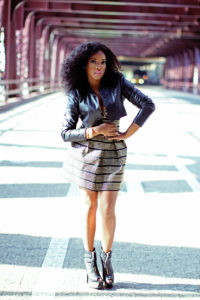 TrunkSpace: When did you know that you wanted to act for a living?
Davis: I never realized acting could be a profitable thing until 2004 when I was on the road singing background for Tamia on the Verizon First Ladies Tour. After seeing the production and the crew and all of the logistics as to what makes a live show, I was hooked. And of course getting a weekly check that was greater than $900 blew my mind. Up until that tour, I was doing a lot of musical theater for my church and for local up-and-coming writers. But I was never paid for them. I apparently was sewing my time and gifts.

TrunkSpace: Was there a particular performance or actor/actress from your childhood that you remember being drawn to and inspired by?
Davis: Honestly, when I was little I never was in awe of one particular artist. I had a huge imagination. I wanted to be a teacher or a ballerina. I do remember mimicking very poised and elegant women. I always admired a woman who looked beautiful in her clothing and her makeup. So that’s what inspired me… beautiful, strong women.

TrunkSpace: How did you decide to approach your career as an actor? Did you formulate a plan of how you wanted to attack what is known for being a hard industry to crack?
Davis: I never had a formula. I just remembered making myself available to learn and grow. Especially in times when someone 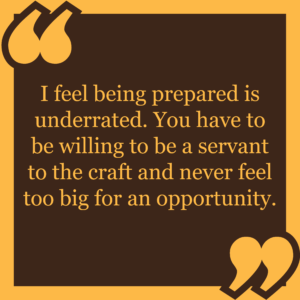 booked a part and then backed out at the last minute. Somehow, I would get versed in their role and learn. And for some reason, I was always put on the spot to fill the vacancy. I feel being prepared is underrated. You have to be willing to be a servant to the craft and never feel too big for an opportunity. Most of my parts came from referrals. So honestly, I never had an approach. I just was willing to be a vessel, no matter how big or small the role was.

TrunkSpace: When did you decide to move away from your home and pursue acting as a career? How old were you at the time?
Davis: I never moved from Houston for a career. I actually moved to LA in 1998 to attend University of Southern California. I was 17 years old. I pursued acting in my church’s acting department. From there, I sang in a Christmas production and my name began floating around LA. One thing led to another. But I want people to understand, just as I was sewing my time and talents in the beginning of my career for no compensation, per se, that really has not changed now. Pursuing a career in acting has changed drastically. To this day, I am still pursuing.

TrunkSpace: Was that move an easy transition for you initially? How long did it take you to feel at home and find a good support group of friends and peers?
Davis: The transition was really hard. I remember crying the first week of school and calling my parents all the time. My phone bill in college was sky high because it was so hard. But a family friend introduced me to her family and they took me in as if I was their child. My whole life changed while in LA because of this introduction. I literally felt I had my family in LA for my entire college days. I eventually joined a church and got involved and, on campus, I began to volunteer and join community organizations. So the transition eventually became smooth.

TrunkSpace: What has been your biggest break in terms of a particular role or project thus far?
Davis: This is a difficult question because honestly, I feel they all have been breaks for me. But to date, I would say being on “The Voice” was huge for me. I was blessed to grow supporters from across the world, but I believe that platform sparked so much encouragement in myself as well as to other aspiring talent. The show humbled me. I learned about the power of perseverance. To this day I am still in shock that I didn’t remain on the show as long as I expected to be, but I feel that mega platform was a setup for something greater. At first I felt shamed to have not made Top 12, but at the same time, I learned how much I desire to create platforms as an African-American woman. I felt like all my life I was pursuing the stage only to find out, there’s not a lot of women with my skill and knowledge that are behind the scenes in this industry. My outlook and vision has expanded and now I honor the new assignments at hand.

TrunkSpace: Is there a specific type of role you’d like to take on or a specific genre that you feel more at home in?
Davis: I would love to play a heroine or a college student in a film or TV show. Sounds funny, I know. Any role that would allow me to act and sing would be ideal. I would love to be on any of the NBC holiday specials or a part of “House of Cards” or “Homeland.” I’m currently creating my own content, but of course that has its challenges as well. 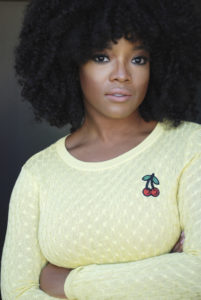 TrunkSpace: What would you say is the greatest strength an actor/actress can have outside of acting ability itself?
Davis: The greatest strength one should have is the ability to teach. I have learned in all my travels, people want to understand and know the truth. You must be strong in self and therefore, be able to convey that power into someone else. I never thought in a million years that I would be passionate about encouraging others to pursue their passion. No matter your upbringing or not having enough money or resources. I feel God’s light in me has been more than for me. I almost get teary-eyed when I hear others say what they can’t do because of x, y, and z. I desire to continue to teach that wherever there is a will, there is a way.

TrunkSpace: What is your ultimate dream when it comes to your acting career? Where would you like your path to lead?
Davis: I actually don’t have an ultimate dream per se. I would love to have consistent work so that I can continue to monetarily invest in my career and my other initiatives. I would like to see my Syren Arts Academy get an underwriter to take the initiative global. The arts is the most important creative skill that has been removed from educational systems and yet, creatively the outlets are small. I desire to grow the awareness of Edu-Tainment and really put my degree to use. I don’t want to be another employee or another hopeful actress, I want to have the tools to empower the hopefuls and almost become an artistic startup for new talent.

TrunkSpace: What advice would you give another young aspiring actor/actress who is considering moving away from home to pursue their dream?
Davis: First, have the understanding of your end goal. Are you trying to be famous? Be discovered? Is it your calling? Or is it a passion? 2.) Define what success means for you. 3.) Maybe think about opportunities off stage first. 4.) Grow a network of people, learn the craft, and then attack. If you are an actor, maybe learn singing. Or dancing. 5.) Stop feeling you can’t do or be because you don’t have an agent or a manager. Trust me, God will lead you. People often scratch their heads when I tell them my story. It’s not traditional by any sense. You must be open to exploring a trade or a passion that you have allowed to remain dormant. You have to be willing to continue to seek opportunities and not just rely on a manager or an agent to do all the work. Finally, you must be willing to accept that you are auditioning and desiring roles that others are seeking to book as well. Therefore, you must own your craft and be strong and confident with what you bring to any role or audition room. So, keep using your gifts, whether the job pays or not.

TrunkSpace: Where can people (and casting directors) learn more about you?
Davis: My website www.TamarDavis.com has all of my links. If you are a casting director, I do have an actor’s access account: http://resumes.actorsaccess.com/ashleytamardavis.