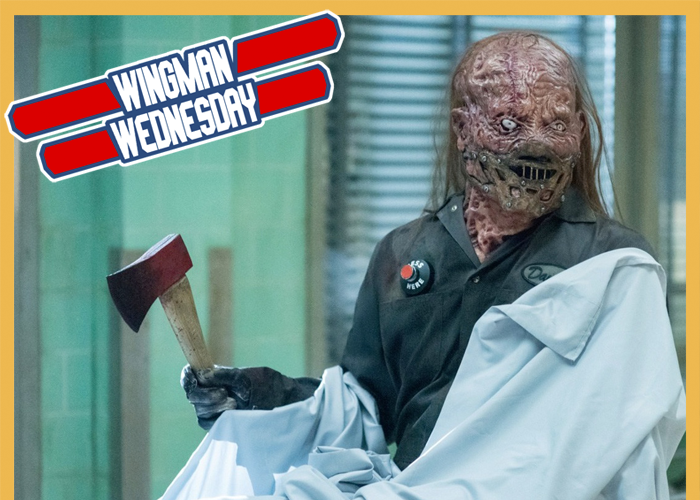 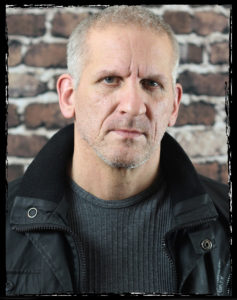 There have been a sundry slew of fan-favorite characters to claw and scratch their way into the hearts of “Supernatural” fans throughout the course of its 14 seasons. Last night’s episode, “Mint Condition,” introduced us to a new dead darling that our slasher-loving lips can’t stop quoting, Hatchet Man.

“We all do bad things sometimes!”

We recently sat down with the actor who brought the memorable boogieman to life, Barry Nerling, to discuss hatching Hatchet Man, fortuitous barbecues, and “farting” in front of Steven Spielberg.

TrunkSpace: We are suckers here for “Supernatural,” particularly with the quirky, monster-of-the-week episodes. One of our new favorites is “Mint Condition,” which aired last night. In it you played Hatchet Man. What does it feel like to be a part of such a memorable episode of this long-running series?
Nerling: It feels pretty dam cool to be honest. I started on the show back on Season 1/Episode 3 and they have had a lot of memorable characters along the way. “Supernatural” has always been about hunting monsters and telling cool stories. Their so called “standalone episodes” are always so much fun, like “ScoobyNatural” – one of my favorites. I just hope the fans like this character so he to can join the ranks of all these great character creations spawned by “Supernatural.”

TrunkSpace: Hatchet Man is a great agglomeration of celluloid slashers, particularly those from the ‘80s we grew up with. How would he fare against some of cinemas deadliest like Jason Voorhees, Michael Myers, and Freddy Krueger?
Nerling: Honestly, I think all of those guys are great. I think we would all look at each other and just nod. You know, like, “I feel you brother, respect.” Although, Krueger likes to try to get into your head, so I think Hatchet Man would have to be careful of that.

TrunkSpace: In the episode, action figures come to life and all hell breaks lose. Did you get to keep any versions of your own mint condition Hatchet Man self as a keepsake? What would you think if actual Hatchet Man figures ever found their way into the collector’s market?
Nerling: Well, sadly the only copy was the life-size version in the comic shop, so no, I did not get a mini version to put with the 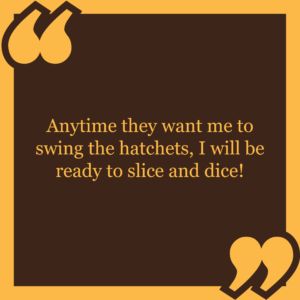 rest of my collectibles. I for one would love to see the Hatchet Man action figures. If they need me to pose, I am available.

TrunkSpace: Did wardrobe and makeup sort of dictate your performance? Did you just BECOME Hatchet Man when you slipped into his physical skin, so to speak?
Nerling: Playing these types of characters, you always draw from or lean on the makeup and wardrobe, for sure. It is the starting point. Of course, you can not help but draw from the icons of horror as well. I was fortunate to have Special Makeup Effects Artist Mike Fields at the helm for this character and his work is like being in your own skin, so you can really work the character. He designed both the mask and the actual prosthetic makeup I wore.

TrunkSpace: You’ve worked on the series in the past as a stunt performer. Was this a special experience given how featured the character is and how much potential the episode has to remain memorable within the fandom?
Nerling: Yes, this one for sure stands out for me. I have had so much fun doing everything I have been able to do on the show, but yes, this character is very special, for sure. It was also the first time I actually get to fight Jensen (Ackles). I always seem to end up fighting – or should I say, dying at the hands of – Jared (Padalecki), so it was a nice change.

Did I mention how much I love both of those guys? They really are awesome.

TrunkSpace: Speaking of the fandom, there are very few shows out there that have the kind of loyal audience that “Supernatural” has. You’ve seen how the well-oiled machine works both behind the scenes and on camera. What do you think keeps the “Supernatural” train chugging along, currently in its 14th season?
Nerling: First and foremost, the fans are what keep it going. As long as they want to keep watching, the crew will keep making it. Those guys have a lot of fun on that set. They really like each other and it helps that the boys have not changed since day one.

TrunkSpace: You’re based in Vancouver. How important are shows like “Supernatural” and “Arrow,” which you have worked extensively on, to the city and the industry there?
Nerling: These shows are so important to our local industry. They employ a lot of people behind and in front of the camera. They give all of us a chance to show off Vancouver’s talent pool and believe me, we have so much here.

TrunkSpace: You started your career in film and television much later than most. What was it that prompted you to take that leap, because for many people, it’s easier to shelf the dream than it is to pursue it?
Nerling: For me, it was a chance meeting at a barbecue in Vernon that got me here. An agent was there from Vancouver and he liked my look. I took a chance and started doing extra work to get the feel for it and realized I had a performer living in me. So I moved down and started to pursue it more seriously taking classes, getting a principal agent and learning from others around me. Never too late to go for it – whatever you want to do.

TrunkSpace: As we mentioned, you’re also a stunt performer. What is the craziest thing you’ve ever done on-camera – the thing that made you go, “Am I really doing this?!?!”
Nerling: I did a gag on “The BFG” where the character I was doubling takes a drink and my pants get blown off from a fart and then I get shot up into the air and crash back down on the table. Looking down and seeing Steven Spielberg giving me direction was definitely one of those moments.

TrunkSpace: One of the things about movie slashers is that they always come back for a sequel! If Hatchet Man came back in the future, would you be willing to pick up the hatchet once more?
Nerling: Absolutely! Anytime they want me to swing the hatchets, I will be ready to slice and dice!