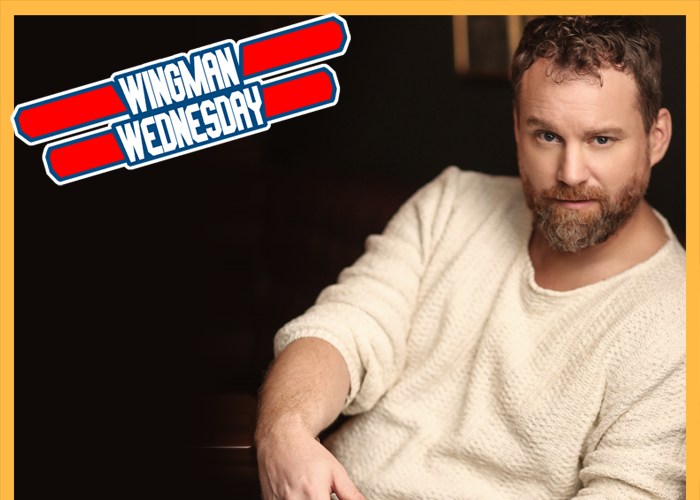 It’s not often that an actor starring in a series is as big of a fan of the show as the fandom that supports it, but for Patrick Gilmore, Season 2 of his Netflix series “Travelers” is queued up and ready to stream along with the rest of us. As David Mailer in the time-traveling drama, the Canadian-based actor continues to be impressed by the grounded nature of the science fiction storytelling, relishing in the human moments that the writers craft for both his character and his costars’.

We recently sat down with Gilmore to discuss how he became a fan of his own show, what keeps him from calling it a science fiction series, and why he felt overwhelmed walking the floor of a recent comic convention.

TrunkSpace: For you, someone who is involved in the series, what was the most interesting aspect of “Travelers” that first drew you to it? Was it the premise? The tone? Or was it something else entirely?
Gilmore: For me it was, and I’ve been using this term a lot, the world building. The show is a sci-fi show about people from the future, so on paper you read this and you’ve got something in your head that belongs on the SyFy channel. But if you watch the show with the sound off, it’s just a normal show about people. It takes place in present day, and it’s about relationships. That’s the part that excited me, is that you don’t even get much of a glimpse of the future – in fact I don’t even think you see it. It’s alluded to, which allows you to embrace the show a little more because it’s a little more relatable, given that it’s in present day.

TrunkSpace: It’s an aspect of the story. It’s not THE story.
Gilmore: Yeah, and I think that allows the viewers to connect in a way that they might not connect to a show about people in a spaceship. These are people sitting in a coffee shop and breaking up. It’s something we’ve all gone through – more than once sadly. (Laughter) It just makes it more real. It removes that block. It allows our suspension of disbelief and again it raises the stakes.

TrunkSpace: And it probably opens the door to a wider audience because some people place a stigma on science fiction. “Travelers” isn’t what they’d expect.
Gilmore: Yeah, my parents are a perfect example. They’re not gonna watch a show about a spaceship or an alien, but they’re curious about this couple. There’s a woman raising a child practically on her own with an alcoholic husband who happens to be a police officer. That’s fascinating and that’s just one of the storylines in “Travelers.” When people ask me what kind of show it is, I always hesitate to say sci-fi. That’s the inroad for the show, but the show becomes so much more.

TrunkSpace: What were you excited to do with your character David that you have yet to tackle in the past with previous 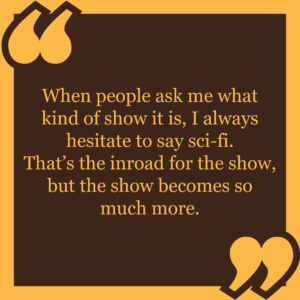 characters?
Gilmore: I have hinted at other romantic relationships, but I’ve never actually had a chance to really fully play out this will-they-won’t-they thing, which I’ve been such a fan of since the days of Bruce Willis and Cybill Shepherd in “Moonlighting.” They just set the bar so high.

It’s such a catalyst for so many storylines of keeping these two orbiting each other. As a fan, it breaks your heart to watch what these two characters go through, David and Marcy – Marcy being a time traveler and me being her ex-social worker, now romantic interest. That was really fun for me to watch, because you grow up and you want to be an actor and you want to be Bruce Willis. You want to play that guy that is trying to win the girl over, but all of these circumstances are keeping you apart. I think that is fun. If you like that, you’re gonna like the show, especially how Season 1 ended in such a dramatic fashion. But the way Season 2 ends… I went to the writers after I read the last script, and I said, “How are you possibly gonna pull out of this nosedive?” (Laughter)

TrunkSpace: And we’d imagine that because it’s still not fully fleshed out yet, you probably don’t even know how they’re going to pull out?
Gilmore: They give me hints. I think they just love torturing me, because they probably do know the answer. (Laughter) And I like it that way, because otherwise I’m seeing the strings of the show – and I’m a fan of the show myself. I remember being on “Stargate Universe,” which was another Brad Wright joint, and whenever the scripts would come out it was like Christmas. They would just print them off and you could see everybody during lunch break or during the downtime, in a corner of the studio just flipping through the script, because they couldn’t wait to see what happened. I was typically going through the last few pages to see if I survived the episode. (Laughter)

I feel the same way with “Travelers.” I’d love to know what happens with David, but I want to be a fan too. I want to go on the journey as much as I can from the outside.

TrunkSpace: It has to be very exciting to be a part of this Golden Age of television, but at the same time, with so much quality competing content out there, does it get more difficult to bring eyes and interest to a show?
Gilmore: Absolutely. It gets harder to promote things. Back in the day – when I say the day, when I grew up I had, I think, two or three channels on my TV and you had everybody tuning in for the finale of “M*A*S*H” and “Dallas.” So what are you gonna watch? Well, you really only had a couple options. There was a template and you had your multi-cam sitcoms and you had your procedurals, and your “60 Minutes.” You really knew what you were going to get tuning into something. Now you have no idea. That’s fun, because you’ve got so much creativity being given a stage. As far as promotion goes, yeah, it’s tough. How do you say, “No, no, you should watch mine because mine stands out for X, Y, and Z reasons.” So you almost have to have some sort of MacGuffin or an angle that’s going to make you standout from the rest.

TrunkSpace: And the real trick for the viewer is, for the most part, everything is good now. The stories and characters are so complex. You spend more time deciding what you’re going to watch next than actually watching it.
Gilmore: Oh, I know. It’s like a kid in a candy store. I get overwhelmed. My buddy and I went to Fan Expo that was in Vancouver last weekend, and I’d never been. And we go to buy maybe a comic book or a little collectible toy or something, and we walk in, and it’s too much, there’s too much choice, and I felt overwhelmed. I had to just calm myself, do a little walk around and then decide. There’s a lot of time spent in that.

So what makes this standout? I think the fact that you have someone like Eric McCormack who is known for playing the – I almost compare him to John Ritter in his physicality. Eric is known as a really funny, straight laced guy, then you see him in this role – and they’re airing the same week, so it’s really fun to be watching “Travelers” and see him on “Will & Grace” a couple days later. He’s bringing something so dark and so new to what people are expecting, so that’s a ticket to watch this show. You’ve got a cast of up and comers like Jared Abrahamson, MacKenzie Porter, Nesta Cooper, Reilly Dolman, who a lot of people don’t know, but it’s just solid, solid acting. There’s not one false note in that whole score.

Again, I’m trying so hard not to be biased, but I am a fan of the show. (Laughter) It would make my job a helluva lot harder to be on the phone with you if I’m like, “Yeah, I’m on this show but there’s other cool things on TV…” I just think you’re gonna dig “Travelers.”

TrunkSpace: You guested on “Supernatural” way back in Season 3. It’s currently in its 13th season. If you were in a situation to be David in “Travelers” for 13 seasons, would that be something you’d be comfortable with and would you feel fulfilled playing the same character for that long?
Gilmore: That’s a great question. My immediate thought was paying my bills, and I’m like, “Oh, yeah! That would be awesome! 13 seasons!” But I think the beauty of “Travelers” is that they’re not bottle episodes – they’re not filler to get that 20 episode season that the network requires. Each episode builds on the other, and I think that to go beyond X amount of seasons – and I’m in no position to guess whether it’s five or six seasons – anything beyond that I think would do a disservice to the show as a whole. I think that the writers have an endpoint in mind – I know they do, but of course they’re not telling me. (Laughter) I can’t speak for the producer or the creators, but I feel like they have a certain amount of seasons in mind, and I don’t think that they would go beyond that, just for the sake of keeping the quality of the show where it is.

Now as an actor, and again someone who’s paying the bills, to be on a show for 13 seasons, that allows you a lot of flexibility to go on a vacation, buy food, or pay my bills. (Laughter)

Season 2 of “Travelers” is available December 26 on Netflix.

Season 1 is available now for binging. Check out the trailer below.