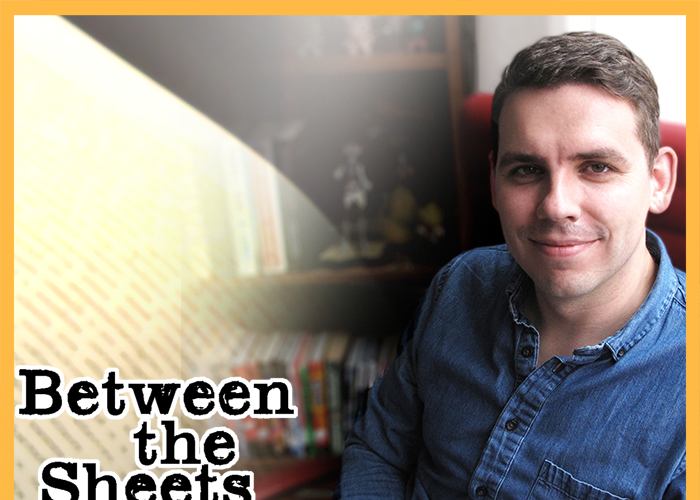 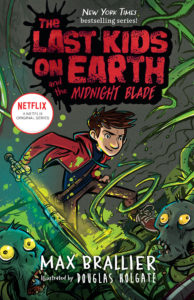 This time out we’re chatting with author and newly-minted executive producer Max Brallier about his series The Last Kids On Earth, helping young readers cope with life through his writing, and why he’ll always have a “wicked” Massachusetts connection.

TrunkSpace: How do you think you will look back on 2019 as it relates to your career? Where did this year impact you most as a writer?
Brallier: Oh boy – I mean, it was a nearly unbelievable year for so many reasons. New Last Kids book out, Last Kids Netflix series launches, my longest run on the bestseller lists, my co-scripted non-kids VFW movie releases, and my new kids book series – Mr. Shivers – publishes. All that is big dream-come-true stuff.

But more importantly – for real – I spent a lot of time on the road with kids, teachers and librarians. And my job is really about them. Seeing the quiet kid in the classroom, talking with the shy kid at an event – that was me! And then having teachers and librarians share how they use my books. All of that is sort of the turbo-charged adrenaline shot that will make sense of my writing over the next year, that will allow – I hope! – a continued career.

TrunkSpace: Is it still a bit surreal to think that a universe and characters that you have created are now living on in a capacity that involves so many other people? Do you have to stop and pinch yourself?
Brallier: So much pinching! 2019 left me covered in bruises.

In regard to the Netflix show – taking my creation (with Doug’s art!) and handing it off to others is a weird thing – both 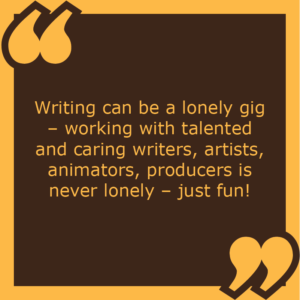 exhaustingly frightening and tremendously rewarding. There’s the fear around loss of full control, but also the thrill of what can happen with the skill and energy and passion of others. And yes, still surreal – always will be, I think!

TrunkSpace: You’re serving as Executive Producer on the Netflix series. For those not familiar with the industry terms and what goes into them behind the scenes, what does that mean for you in terms of your day to day. What are your duties as far as the television series is concerned?
Brallier: A whole range of fun stuff! I’m involved in all aspects of the story and the scripts – and I review art, animations, character designs, storyboards – and, when lucky, get to work with our wonderful cast of voice actors. Basically – our showrunner, Scott D. Peterson, steers the ship and I chime in now and then.

TrunkSpace: Why an animated series? What was it about that medium that made more sense for you as a creator than a live action series or as a theatrical release?
Brallier: I had thought about expressing Last Kids in many ways – live action, feature film, video game, animation, all that. But animation became obvious when Atomic Cartoons – the development and animation studio – approached me about adapting the book series. With Atomic’s incredible team of artists and animators, it was just so clear.

The best thing with animation is that it’s so flexible and non-confining. Monsters? Sure, no problem. The best voices in the industry? Let’s do it! 3D or 2D? Let’s mix it up! An end-of-world apocalypse with bright green grass and vivid blue skies that’s full of fun? We can do that! Animation is such a blast.

TrunkSpace: What has been the biggest and most unexpected pleasant surprise in your journey of bringing The Last Kids on Earth to television?
Brallier: I had forgotten how much I love working with a large team of people – the Netflix series was a wonderfully-unexpected reminder. Handing off my characters – some of who are very personal – and stories to others was a nerve-wracking leap of faith. But it was immediately clear that working with a team just made it all that much more fun. Writing can be a lonely gig – working with talented and caring writers, artists, animators, producers is never lonely – just fun! 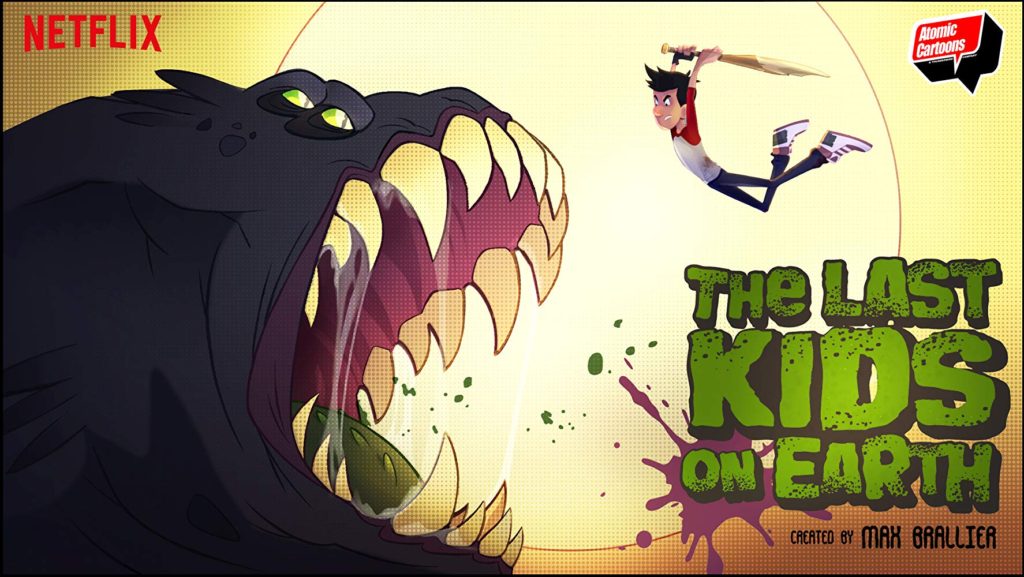 TrunkSpace: For fans, the final product of a film or series is always the most memorable part, but for those involved in a project, we’d imagine it goes much deeper than that. For you, what is something about your time working on the series that you’ll carry with you through the course of your life/career?
Brallier: When I chose the lonely profession of writing, I so missed the social, creative and collaborative rewards of being part of a team. Then with the Netflix series, all that wonderful team stuff came roaring back. It was like I was coming back to life. It’s clear now that I’ll always be searching for that in my career – and in other aspects my life.

TrunkSpace: Has working on the television series inspired you in ways with your literary writing that you didn’t intend? Has it opened up new ideas or opportunities?
Brallier: I’ve always tried to write books that feel like movies or like television. It’s very visual in my head when typing words. Movies were my first love. So, working on the television series has reaffirmed that love – and given me the confidence to write in that format. Certainly, new ideas – and hopefully new opportunities!

TrunkSpace: You’re a Massachusetts boy! (Bay State representing!) What is something that is undeniably New England about you that you can’t shake no matter how long you’re away from it?
Brallier: (Laughter) Yes, Massachusetts boy for sure – I spent most of my childhood in Reading, Massachusetts. It’s really the setting for Last Kids – but I named the town in Last Kids Wakefield, a town next door to Reading. And the school in my Eerie Elementary series is very much inspired by my own elementary school, Joshua Eaton – right down to the names of the characters.

TrunkSpace: What has been the highlight of your career thus far?
Brallier: Not sure if there’s just one. Hitting the New York Times bestseller list will always be up there – that was a concrete goal I had set for myself, and achieving it with Viking Children’s felt so monumental. Meeting Mark Hamill and having him read words that I wrote. Standing in an animation studio and looking out at 100+ people, all animating something that came from my brain. Opening the Netflix app and seeing Last Kids on there for the first time. Sitting in a writers’ room and giggling and smiling and realizing oh this is the best job that exists. Those are all highlights.

Biggest, though, is having a writing career at all, I guess. There’s so much luck involved. And now, to not just have a career – but for it to allow certain things: I’m able to live near family, I can afford health insurance, we’re zoned so that my daughter will go to a good school, my wife has the freedom to pursue the things she loves. That’s good stuff.

But really – again – the best thing is having a parent say, “My child reads because of you.” Or a kid say, “I had a bad day but I forgot about it for a bit because I was reading your book.”

TrunkSpace: Time machine question. If you could jump ahead 10 years and get a glimpse of what your career looks like a decade from now, would you take that journey? If not, why?
Brallier: Oh boy. No, I don’t think I’d take that journey. Back to the Future, man! Like Doc Brown says, “No one should know too much about their destiny.”

Brallier’s latest book, The Last Kids On Earth and the Midnight Blade is available now from Viking Books for Young Readers.

Season 1 of The Last Kids On Earth television series is available now on Netflix. 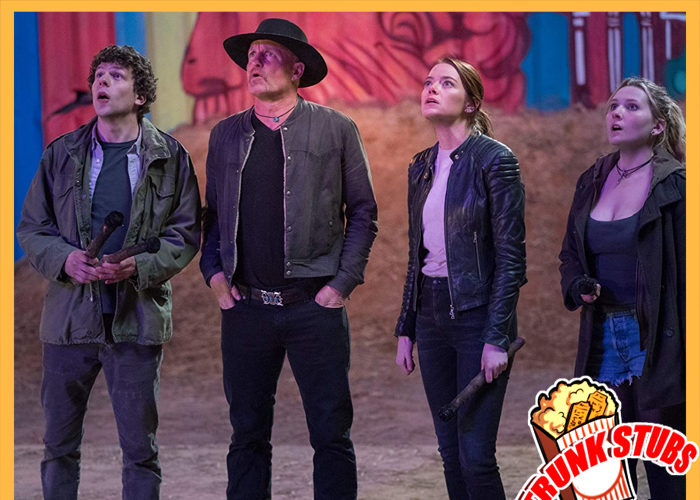 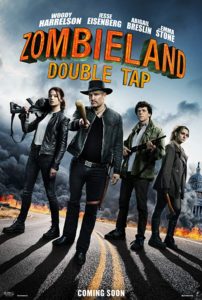