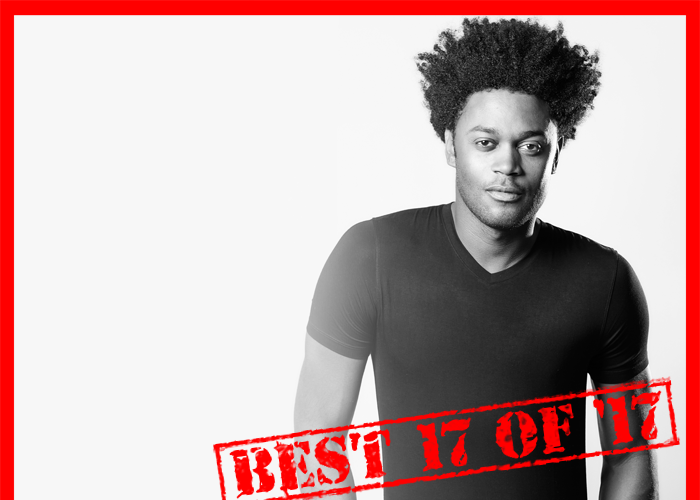 It’s a super terrific day and here’s why. Echo Kellum who plays superhero Mr. Terrific on The CW’s “Arrow” stopped by TrunkSpace to let us pick his brain about his skyrocketing career, including his laugh-inducing work on standup stages across the country where many first fell in love with the Chicago native.

With “Arrow” set to return for a sixth season in the fall, Kellum will be continuing his crime fighting ways, but in the meantime we sat down with the “Girlfriend’s Day” star to discuss the first time he suited up, navigating the passions of the fanboy landscape, and… Mr. McGibblets!

TrunkSpace: What was going through your head the first time you saw yourself in the full Mr. Terrific persona?
Kellum: For me, I grew up loving comic books and knowing that I wanted to be an actor, it’s always been a huge goal of mine to be any type of superhero. (Laughter) So, to do it with a character like Mr. Terrific… going through the audition process and then seeing him become a character to finally putting on the suit to getting his suit upgraded and to finally getting his feel out in the field… it’s been such an amazing world-changing experience for me. Like, I’m actually on a show that my friends actually like for the first time ever. (Laughter) It’s such a cool, wonderful thing to be a part of and every day I count my blessings and I’m just so grateful that I’m getting to bring this character to life.

TrunkSpace: It definitely seems like that in this day and age, the holy grail for an actor is getting to play a superhero character because not only does it look like a hell of a lot of fun to play, but it usually means a recurring role, right?
Kellum: Yeah, for sure. Absolutely. And that was another thing… the fact that they wanted me to come on as a series regular was huge. I was so thankful for that.

TrunkSpace: And congratulations are in order because you’ve been picked up for next season as well.
Kellum: Yeah. Season 6!

TrunkSpace: We know you probably can’t give away too much with how the current season winds down, but is it safe to say that 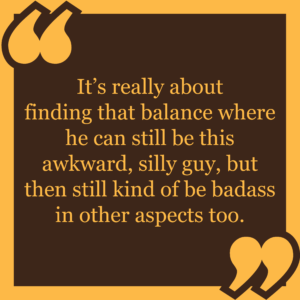 TrunkSpace: We’d imagine it can be pretty intimidating stepping into a show that already has an established on-set atmosphere and tone. How long did it take for you to feel at home and a part of the “Arrow” family?
Kellum: If I’m being honest, like the first day I walked on the set, I felt so at home and at ease and that was mainly because of Emily Bett Rickards. And then meeting all of the other actors and everybody involved with the show… they really did make it so easy and seamless and just a wonderful experience to be a part of. They treat you like one of their own and when I became one of their own, it felt so right. They treat every guest star, every recurring character… they treat with such respect and class and humility. It really just makes you feel welcome.

TrunkSpace: Do you have him figured out as a character? Do you feel like you’re in the headspace of Curtis Holt?
Kellum: Yeah. I really do. And thankfully we have some amazing writers who really come up with so much great material work-wise. But yeah, I really do feel like I’m in the headspace of how they want Curtis and where they’re going with him. Obviously he’s definitely a different iteration of the comic book persona, but I kind of like to think of him as early stage Mr. Terrific… Michael Holt kind of until he gets himself together. Because on this show, obviously he’s a little more awkward and quirky. It’s really about finding that balance where he can still be this awkward, silly guy, but then still kind of be badass in other aspects too.

TrunkSpace: You mentioned that fans were still trying to figure Curtis out and connect with him. Were you comfortable stepping into this world where people are already so attached to these characters as lifelong fans and as such… particularly in the social media age… aren’t afraid to speak their minds?
Kellum: Oh yeah. They’re my people. (Laughter) I know how they can be. I think when it all boils down to it, mostly everything you see is positivity. When you’re fortunate enough to be in a position that any of us are in while in this industry to work on a hit show or a show that people are passionate about, you’re going to get both ends of the spectrum from everyone. It’s just how it works. And if we weren’t in that position we’d be getting zero ends of the spectrum from no one. You just have to be thankful that you’re working out there and living your dream, doing the best you can, and getting paid pretty good to do it. So for me, it’s definitely a thing where you’ve got to take it all in and be thankful for the good love that’s coming in and learn from the negativity that’s coming in and just keep pushing forward.

TrunkSpace: Is there anything in your life, either growing up or now, where you could relate to that passionate comic book fanbase? Is there something that you were drawn to in that same passionate way?
Kellum: For me, definitely anything in the X-Men realm as far as comics go, but really it was video games. For me, video games were my life saver. Video games were the things that I geeked out the most about as a fanboy. I was definitely tough when they would make different adaptations of video games to movies. I’d be like, “What the heck… why isn’t this great?” (Laughter) So I can definitely understand some of the hate. If I would have had Twitter then, I might have let a couple of actors know it. (Laughter)

So I can definitely understand the passion, but the thing is, if you don’t have passionate people about it, it’s not a popular project and you’re probably going to be canceled. 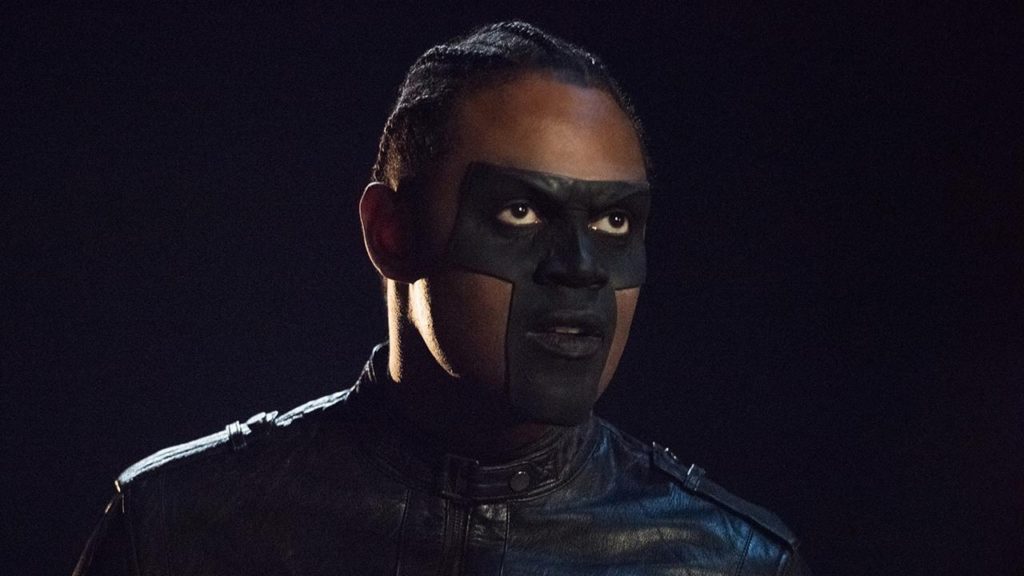 TrunkSpace: What’s so cool about video games today is that it’s now an accepted medium for established actors to voice characters in that world. Is that something you’ve dipped your professional fanboy toy in the water of yet?
Kellum: I have not had the opportunity to perform in a video game, but that’s definitely an aspiration. I would love to voice some video game characters. I definitely want to get into that.

TrunkSpace: You established yourself first in the industry as a comedian. That’s a medium where you write and perform your own material. Was it an adjustment delivering lines from other writers when you made the transition into acting?
Kellum: You know, honestly for me it wasn’t an adjustment because I’ve always considered myself an actor first and a comedian second. Acting was kind of something I just started doing when I was 5 years old in church plays, so I’ve always been saying people’s words. (Laughter) But when I got into comedy, it was like, “Oh, I can say my own stuff.” But it feels very normal and natural to be getting scripts and just going for it, but I also just love ripping and improvising and creating new stuff on it too. But I think I definitely kind of look at myself as an actor first.

TrunkSpace: So how much time do you still save for yourself on the writing/standup side? Are you still currently writing?
Kellum: I always write. I’ve never stopped writing standup material, even when I’ve taken a year or two off. I need to get back into it more… definitely something in the next year. I definitely want to be doing more shows, especially when I’m shooting in Vancouver. I want to be out there pushing the pavement and hitting up a lot of shows. But I never stop writing. I’m always writing. I’ve just got to perform more.

TrunkSpace: Do you think you’ll transition that writing skill set into television and film where you can develop projects for yourself?
Kellum: Oh yeah. Absolutely. I’m writing a feature right now that I hope to shoot next spring when we wrap season 6.

TrunkSpace: It definitely seems more accepted within the business for actors to diversify and be a little bit of everything these days. You’re not as specifically labeled as you would have been two decades ago, for example.
Kellum: It’s true. And what’s funny about that is that it’s not even about being allowed but it’s how you survive now. You can’t depend on just the one thing. Back in the day you’d book one commercial and you’re good for the year. You have to be out there completely diversifying yourself. You have to be into acting and into writing and into director. You have to do it all. You have to be a multihyphenate nowadays.

TrunkSpace: Well, and they always say content is king, but when you’re an actor and developing your own content, you also then control your own destiny.
Kellum: Very true. 100 percent true. You get to really say “yes” or “no” and determine the flow of how you want things to go.

TrunkSpace: It does seem like standup is one of the few mediums were you literally control every aspect of things. Even in music, you’re still having to give some control away, even if that control is not ownership based.
Kellum: Yeah. That’s why I think standup is the toughest form of entertainment to tackle. Because it is just you. In music, like you say, even if you don’t have someone else, you have an instrument to help you. You have your singing voice to help you. You have all of these other tools. In standup, it’s just you and your words and are you funny. Period. Also, a very solitary experience, but it’s so worthwhile.

TrunkSpace: It must have prepared you for the social media age a little bit because standup audiences seem like the first iteration of the internet troll.
Kellum: (Laughter) Oh yeah. Standup audiences were definitely the first trolls. 100 percent.

TrunkSpace: Finally, you’ve got to tell us how Mr. McGibblets came to be?!?!
Kellum: Mr. McGibblets! (Laughter) “The League!” I auditioned for it and it’s just a fun little role. I was a big fan of the show. Love Nick Kroll. Yeah, they just had me come in and do a little one-off. It was great.

TrunkSpace: See, it wasn’t Mr. Terrific who was your first superhero role. It was Mr. McGibblets!
Kellum: (Laughter) Truth right there!

“Arrow” airs Wednesdays on The CW.