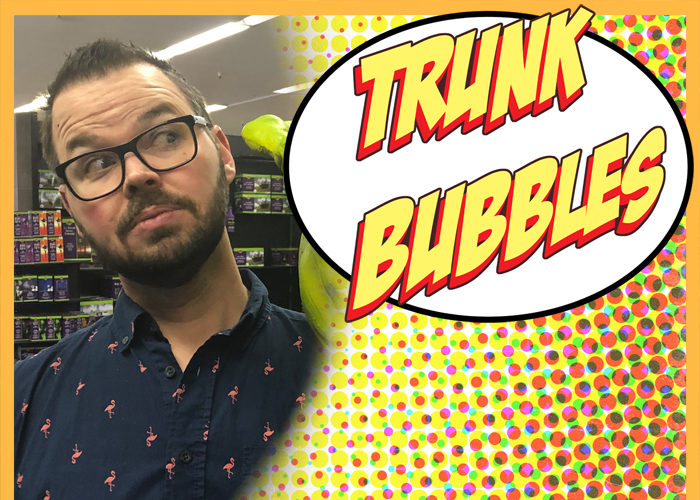 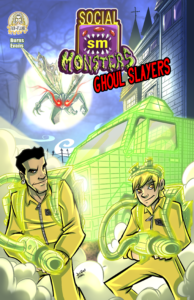 TrunkSpace: You have visited us at TrunkSpace before, so we’re going to change up the format a bit and come right at you with questions. BAM! You’re spearheading the writing AND art duties on the Social Monsters: Halloween Special 2019 (Ghoul Slayers) for Neymar Jr. Comics, so we have to ask, did you feel any pressure going creative Kung fu on an entire issue by yourself?
Evans: Thanks for having me back! It’s great to be back in the Trunk! Honestly, I was having so much fun writing and drawing the Halloween special of Social Monsters, I did not even consider feeling pressured or stressed. I was familiar with the characters and it just felt very natural to put Saber and Davi in the middle of a haunting situation. The toughest part was trying to decide which creepy museum monster would be the star of the Halloween special!

TrunkSpace: As a series, Social Monsters is very episodic and reminiscent of Saturday morning cartoons from the past. What did you hope to accomplish in the 8 pages you were working within, and when all was said and done, do you feel like you accomplished those goals?
Evans: I love that Social Monsters has that Saturday morning cartoon feel to it, so for me, I wanted to sort of pay homage to a few of my favorite cartoons from my childhood. In particular, there is a Scooby-Doo-esque style chase scene that takes place as well as some other Easter eggs in the story. I also wanted to capture the style and look of an animated show with the way I drew the story. I feel like I accomplished a lot of what I set out to do with the story while also staying true to the formula that makes up Social Monsters.

TrunkSpace: Which Dustin had more fun on this issue – Writer Dustin or Artist Dustin? 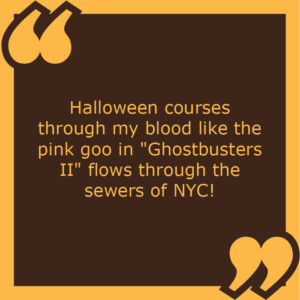 Evans: It’s tough to separate the two for me, because I tend to write with my sketches, if that makes sense. I will see the story in my mind, sketch it out like a storyboard, and then I find the words later. That is, unless I think of great dialogue as I’m sketching it out, then I just write it on the page. So, to answer your question in the most decisive of indecisive ways, I think writer and artist Dustin had the same amount of fun, which was a big ole’ trick or treat bucket full of fun!

TrunkSpace: We started our conversation talking about creative pressures. As an artist, can it be stressful taking on a character who is based on someone’s actual likeness – in this case, international soccer star Neymar Jr.?
Evans: Oh, absolutely! That is always tough starting out. You want to make the person whose likeness you are creating happy, but you also have their millions of fans that will be viewing your work and judging it. I feel very comfortable with it now, because we have worked with Neymar Jr. and his team for quite a while on multiple books that are coming up. I feel like we all have a good understanding of the look and style we need to pull off to achieve a comic book likeness of Neymar Jr. that everyone recognizes and enjoys.

TrunkSpace: You have done some amazing work for Neymar Jr. Comics both with interior art and cover art, always utilizing different styles based on the tone of the book itself. How much does artistic diversity help you in your behind-the-scenes role as Art Director?
Evans: As an art director you may be tasked with wearing a lot of different hats from concept artist to colorist to cover artist, so it really helps to be able to pull off a wide range of styles. It’s beneficial on so many levels including establishing a look and tone for a book. You may be working on a post-apocalyptic comic like Red Card one day and have to switch gears to the Saturday morning cartoon look the next for something like Social Monsters.

TrunkSpace: Again, you’re tackling the Halloween Special, so does that mean you’re a fan of the spooky holiday as a whole?
Evans: Halloween courses through my blood like the pink goo in “Ghostbusters II” flows through the sewers of NYC! Yes, I love everything about Halloween and the time of year it is synonymous with. Scary movies, haunted houses, pumpkin carving and fall-flavored treats are the things this guys’ dreams are made of! I’ve been drawn to Halloween ever since I was a kid, and I think at the core of it all, it’s because there is so much imagination that encompasses the holiday.

TrunkSpace: There are some great monsters in the series, which is a big part of what makes it so much fun. You’re tackling the infamous Moth Man, which is actually a bit different than most of the monsters in the series because, at least in theory, Moth Man is an ACTUAL monster. Did that give you more creative inspiration to pull from?
Evans: Oh yes, definitely! I knew we needed something a little different for the Halloween episode of Social Monsters, so what’s better than a folklore monster that has his own museum? I always find stories like this fascinating, because the mystery and story are rooted in real, factual events, but… it’s up to the individual what exactly to believe about the story. It sort of hearkens back to the “Unsolved Mysteries” era, and those always made me think and creeped me out at the same time! (Laughter) 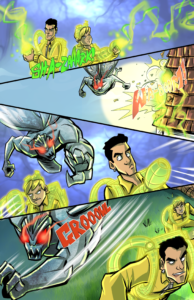 TrunkSpace: Beyond this one issue, you’ve also contributed colors and covers to the Social Monsters universe. What do you think are the biggest selling points of the series as a whole to readers both young and old?
Evans: I think it’s that this book is just so much fun! It has that great cartoon formula. You know you’re going to see your heroes duke it out with a monster each episode, and you know it’s going to have great puns and action with a bit of knowledge tucked away in there. And with Saber’s neural energy power, you never know what he will have to come up with, which is the coolest part. It’s like if a super hero could have a different super power when they needed it for a particular moment in the story.

TrunkSpace: What are you most proud of with your work on Social Monsters?
Evans: Part of what I’m most proud of is actually the concept artwork of creating the Social Monsters. When I get the script from Jason M. Burns, he gives me the direction to go, and I have to find out how to create these monsters from actual artifacts. We’re giving life to inanimate objects, and that can be tricky at times, so it’s like a puzzle. It’s challenging, but when you get it just right, it’s very satisfying to see. Also…THE COVERS! ‘Cause you get to see all of the monsters and Saber and Davi looking cool!

TrunkSpace: Time machine question. If you could jump ahead 10 years and get a glimpse of what your career looks like a decade from now, would you take that journey? If not, why?
Evans: It depends on the time machine. If we’re talking a DeLorean time machine, I’m going, because who could turn down a ride in one of those? Joking aside, I know I would not go, because no matter what is on the other side, I would be a paranoid mess. If I was successful or unsuccessful, I would probably just be paranoid that every choice I was making in the present would lead to my rise or downfall… but then again, if they have floating skateboards in 10 years, and I could bring one back, I’m going!