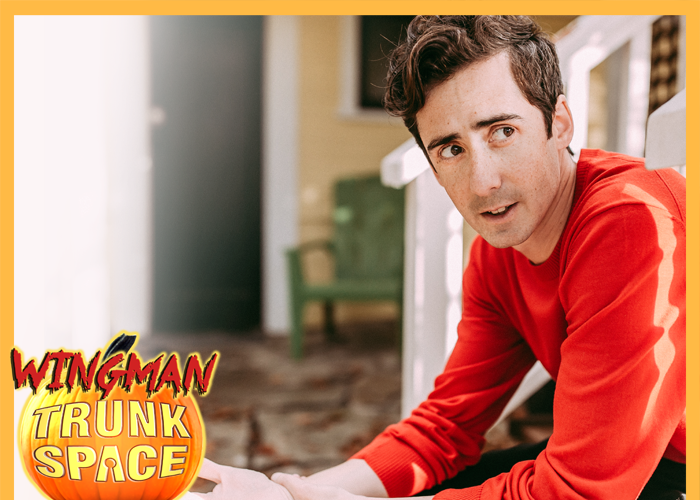 When not being forced to compare dad apples to Schwarzenegger oranges, Amitai Marmorstein is slipping into the beautifully unusual world of “Dirk Gently’s Holistic Detective Agency” as Lieutenant Assistent, right-hand man to Hugo Friedkin at Project Blackwing. The Jerusalem-born actor is relishing in the opportunity of playing the straight man surrounded by so many zany, imaginative characters and thinks the show’s unique flavor is part of the reason it has resonated with so many viewers.

We recently sat down with Marmorstein to discuss his early performance choices for Lieutenant Assistent, how he doubled down on going meta in the “Supernatural” universe, and why his dad is often mistaken for the Terminator himself, Arnold Schwarzenegger.

TrunkSpace: “Dirk Gently’s Holistic Detective Agency” is such a unique show both in premise and tone. What does that uniqueness offer an actor from a performance standpoint?
Marmorstein: That’s a great question actually. I remember talking to someone about getting a part on the show, and she was like, “Congrats, man. That’s great! It’s a tough show to get on because it’s such a unique…” exactly that word, “unique sensibility.”

It’s hard to know what they want. It’s hard to know what the casting director wants. I think the thing that I, when I read it anyways, latched onto was that I thought it was funny. There were a few different choices I remember I could make in the audition, and I was like, “I’m gonna pick the one that I find funniest just because I don’t really understand what they are going to want.” It is just so weird, that it could go a million different ways. So, I was like, I’m gonna just go with what I would love to see if I were watching the show, and luckily it turned out to be the same thing that Max (Landis) and the rest of the gang wanted.

TrunkSpace: And were those early choices that you made in the audition maintained in the final product we see in the series?
Marmorstein: Yeah, totally. It was funny, too, because I got cast off tape. And I did three different versions in the audition as well. So, when I showed up on my first day, I even had to talk to Arvind (Ethan David), one of the producers, and I was like, “Hey, which one did you guys see?” I had a feeling Tiffany Mak, the casting director, sent in only one of the choices, and I was like, “I have no idea which one they saw, and which one they’re expecting me to do today on set.” (Laughter)

So, yeah it all worked out. It was the same one. It was funny too, because the choice kind of came from a place of… the dynamic between the two characters. I couldn’t get this idea out of my head of what it might be like to be, say, an aide or an assistant to some prominent political figure that is in the zeitgeist today, and dealing with the gross incompetence, to put it as delicately as I can, without being able to really put him in his place or anything like that. So, that’s where the tension of the character always seems to fall for me.

TrunkSpace: You mentioned auditioning via tape. Is that kind of a daunting prospect knowing that you can’t really adjust on the fly if they want to see something different?
Marmorstein: It’s funny, if I do my first audition well, if I’m happy with what I do, then I’m just like, “Oh please God, be off tape. Please, I don’t wanna go back and screw up my callback. Just take that take that was a good one. Please let them see that one and let them make their decision off of that.” So, I think there’s ups and downs to it, because sometimes you can get thrown by redirects in the room. I’d say it’s kind of a mixed bag.

TrunkSpace: It must be easy to get thrown off by somebody’s energy in a room too, if they’re sort of checked out or just not giving anything back? 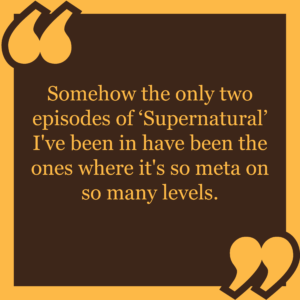 Marmorstein: Oh, totally. Some auditions, I swear I’ve gotten booked and not booked based on the way that the director or producer just said “Hello” when I walked in. (Laughter)

TrunkSpace: For those who haven’t caught up on season 2 of Dirk Gently yet, can you give us an overview of your character and what drew you to him from the page?
Marmorstein: Sure. To give you a little idea of the character, the character’s name is Lieutenant Assistent.

TrunkSpace: Which is a great name. (Laughter)
Marmorstein: (Laughter) I don’t think I’m allowed to spoil the joke with the name right now, but keep your eyes peeled.

So, he works at Blackwing, which is of course is the nefarious government agency that seems to be working in the shadows trying to hunt Dirk Gently and Bart and the rest of the holistic super people. One of the things that I love about the character is that, of course, there’s an incredible dynamic with Friedkin. And Dustin Milligan is one of the best actors I’ve worked with – it’s my second time working with him. I love him to death. He’s super great and so funny.

But, then I think the other side of it that I love is that it’s this crazy world where you’ve got Friedkin chasing after something that he doesn’t even really know what it is, and you’ve got all these wild characters. Dirk is such a creative, imaginative character and I feel like I get to be, in a way, the straight man where I get to walk around like, “Is everybody seeing how crazy this is?” I don’t have a huge role in this season or anything, so it’s hard to compare it to Todd in the first season, where he was very much the wide-eyed “what is going on?” guy, but it feels sort of in that same realm, and that’s a lot of fun.

TrunkSpace: There’s such a crazy buzz surrounding the show. You mention it to somebody, and if they watch it, you’re kind of accepted into this secret club. When you’re working on a show that has that kind of fanboy pedigree, does it expose you to a more passionate fan base or more passionate viewers than it would if you were doing a network procedural?
Marmorstein: That’s a good question. Last year I worked on “Wayward Pines” and that was great too. That has a really passionate fan base as well. That one was a cool show that a lot of people, sci-fi nerds, really liked, but this one does feel like this little cult thing. You go on Twitter and you see some of these fan accounts and you see all the cosplayers and stuff – it feels like it really touched a group of people that might not have otherwise responded. I don’t know, it feels like some people really got swept up in the imagination of it and that’s great. It’s really cool when you can find a really cool niche thing like that. 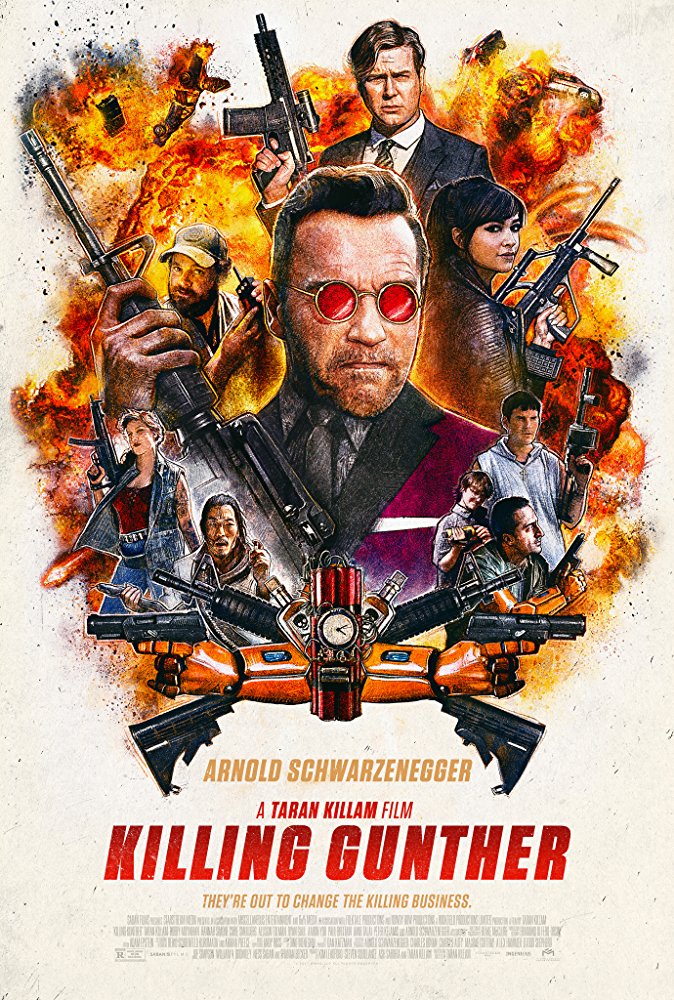 TrunkSpace: Sticking with the idea of fandoms, you actually appeared in one of our favorite hours of television of all time, the “Supernatural” episode, “The French Mistake.”
Marmorstein: Oh my god, that’s so funny! I’ve done two episodes of “Supernatural.” I hate to mess up the continuity of it, but I guess with “The French Mistake” it can kind of evens it out. (Laughter)

The first one I did was at a Sam and Dean comic book convention. Somehow the only two episodes of “Supernatural” I’ve been in have been the ones where it’s so meta on so many levels. The first one I did I was like “Wow, this is hilariously meta. I’m cosplaying Sam and he’s cospsaying Dean.” Then of course the next time I got on I was like, “Oh my god, how is this… what are they gonna do next season?” (Laughter)

TrunkSpace: Jumping back to the present, you’re also set to appear alongside Arnold Schwarzenegger in the upcoming film “Killing Gunther.” What is the experience like, calling home and getting to share the news that you’re in an Arnold movie?
Marmorstein: (Laughter) That’s a great way to phrase it too because I grew up on Arnold. My dad is a huge Arnold fan, took us to all of his movies, even when we were probably too young that they might have been slightly traumatizing. (Laughter) He loved him so much. His favorite dad joke is this running thing that he would always do whenever “Arnie” would come up in conversation. He would stop the conversation and say, “You know, people mistake me for him all the time.” Which is a joke because he is a 5 foot 5, bearded, pot-bellied Rabbi. So yeah, it’s a sight gag. (Laughter)

I was so excited to tell him that I got the part and he was really psyched about it. And I even got to tell Arnie that my dad had that joke with him, which was pretty cool.