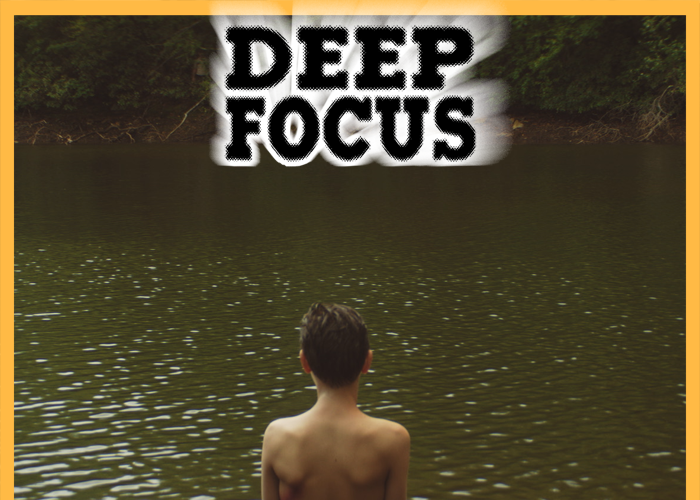 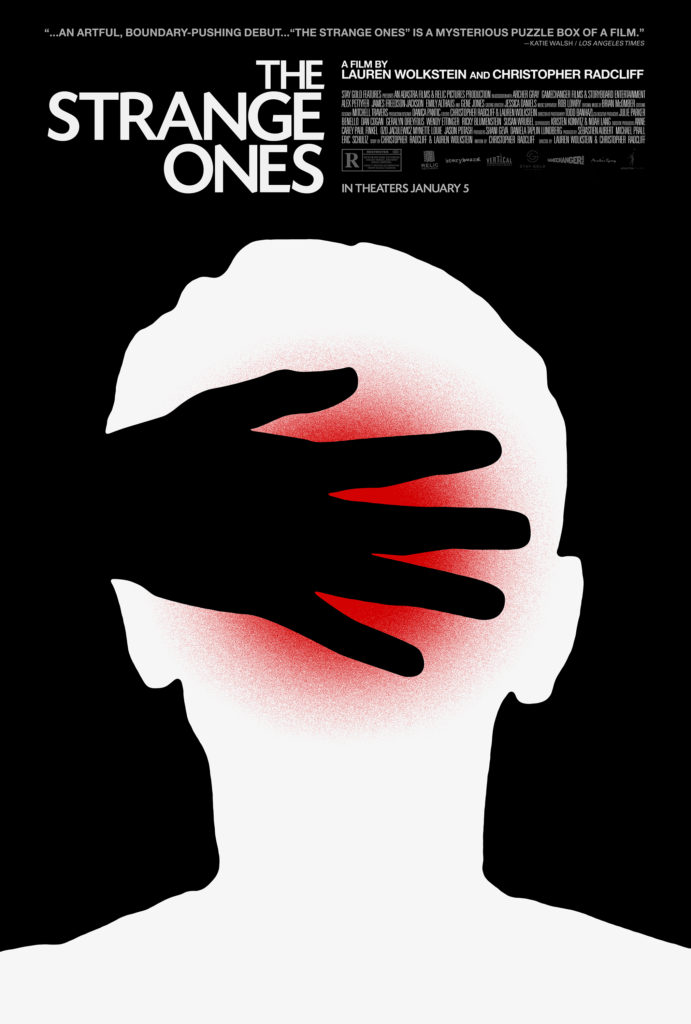 This time out we’re chatting with Christopher Radcliff and Lauren Wolkstein, co-writers and co-directors of “The Strange Ones,” a dark and suspenseful cinematic journey filled with something we can all relate to, raw human emotion. We recently sat down with the pair to discuss the film’s journey from short to feature, how they manage their creative partnership, and why they both view sitting in on a screening of their work so differently.

TrunkSpace: “The Strange Ones” started out as a short, which was first released about seven years ago. Did you ever think that you’d still be talking about it in 2018?
Radcliff: We have been with it for a very long time, but it’s really cool to be able to talk about the feature in a way that, when the short came out, we wouldn’t really talk about it that much. Now we’re really able to talk about both things at once, because when the short came out it was just making its rounds and not a lot of people talk about shorts in the way they do about features, so it’s really nice.

TrunkSpace: Did the two of you actively set out to turn the original concept into a feature?
Radcliff: We knew relatively early on in the process of making the short that there was material for a feature that we were excited about and would want to explore at a feature length. Even though the short film was something we started in film school and completed shortly after film school on its own, it was pretty early on in the process with the short that we knew that there was a feature in there, and it was just a matter of time of excavating it from that.

TrunkSpace: So now that the film is complete, does it feel like your journey with the property is also complete? 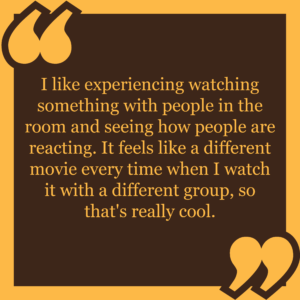 Radcliff: I don’t know. In a way it feels kind of like the end, and also a little bit just the beginning. One of the more exciting but also terrifying aspects of it is just that you make a movie, and then it exists forever. This is still just the beginning of the movie’s existence. It’s gonna be available. It’s gonna be in the world for longer than we are, so in a way, it feels like the end of maybe the first chapter, but sort of the beginning of the film’s existence. It’s exciting. I think from a creative perspective, it’s exciting to have created something that will last for a long time.
Wolkstein: Yeah, and it’s exciting that people will finally be able to see it. We’ve been working on this for, as you said, seven years. It’s nice that it’s not just us that are in it now. Now we can share it with the world.

TrunkSpace: You both shared directing duties on the film. When the two of you put your creative partnership together, did you set up a system of split responsibilities so that you didn’t step on each others’ creative toes, or do you share every aspect of the job equally?
Radcliff: Yeah, we both share every aspect. We do everything together. We met in film school, and we direct solo as well as together, There’s not really any one aspect of the directing process that we feel comfortable not equally involving ourselves in. But, knowing that when we first set out to direct and collaborate like that, we did set some kind of a system for ourselves and some ground rules. We basically said that we would do as much prep as we could in terms of getting on the same page about what movie we were really making and how we wanted to tell the story visually and directorially. We would shot list extensively. We would get together just to make sure that we had a common understanding of what every scene and every dramatic beat and every moment was really about, and how we wanted to express that with the camera.

Then we also set our ground rules for each other where if we were on set and either one of us wants to give a note and we had an idea for either the camera or the actors or anybody, we would just feel free to give it without talking to each other about it. If we found that we disagreed, we would then just do another take. That was just a way to move more quickly on set, because you’re always behind for time on sets. We found that we very rarely saw things differently. That was a way for us to have autonomy, but also to make sure that we had a shared vision that we were always working toward. 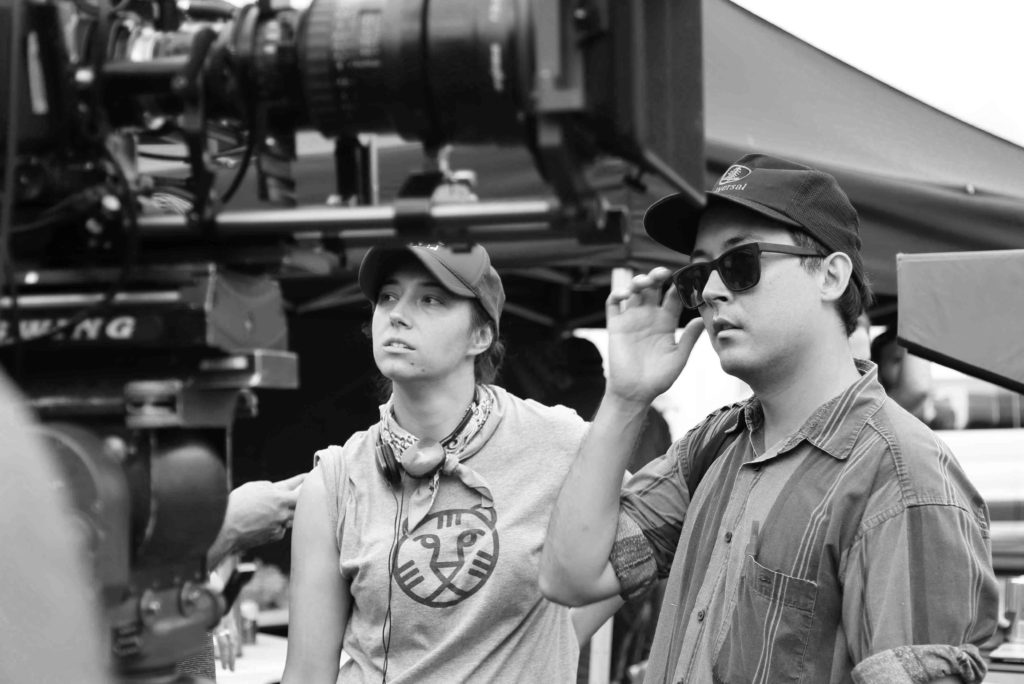 TrunkSpace: You also wrote the script together, which is a very collaborative journey. But the one that surprised us is that you edited “The Strange Ones” together as well, which as far as processes go, is sort of the meat and potatoes hours of seeing the creative vision come together. What was that process like, essentially slicing your baby together with both of you in the same room?
Wolkstein: That was the hardest process out of the whole thing, because we had to make really important decisions about what would stay in the movie and what would leave. It was just really hard. There are a lot of times when we had to actually kill a lot of our babies. There are a lot of scenes that aren’t in the movie that we shot. Having to come to those decisions was very difficult. We actually spent a lot of time in the editing room together, just really trying to find the pace of the movie and to find the best version of the film that we had shot. That took a lot of time, crafting that. Then to have to throw away some things that we ended up really loving, but didn’t have a fit in the actual version, that was really tough.
Radcliff: I think the fact that there were two of us actually made that part of the process the greatest benefit from there being two of us because you are faced with so many difficult decisions, and having somebody in there with you, all the time in the room to have a second opinion with, automatically made that part of the process a lot less lonely.
Wolkstein: That is very true.
Radcliff: It actually made it easier to make those hard decisions. I think it might have been a much more demanding mental process if it was just up to either one of us, and we weren’t able to weigh in with each other. But I think actually editing-wise, it was great to have both of us there.

TrunkSpace: And with thrillers in particular, it must be nice to have that other person in the room with you, to see if those moments you’re creating in the story are working or if they need an extra second to breathe… an extra beat to get the point across.
Wolkstein: Definitely.
Radcliff: Oh yeah, absolutely. That’s the thing that you don’t really realize in editing until you’re in there doing it. Seconds or frames, very tiny decisions, really impact the experience of a film. For us to both be there and both agree on certain things… I think the film has a very distinct pace and editing style, and I think that came through in our collaboration. We never wanted to rush anything, but we also never wanted anything to take too long, so it was a very nuanced thing that we were going for, especially because the story is dealing with so much ambiguity that the fact that we were both there and could weigh in on all of those aspects was tremendously helpful.

TrunkSpace: Do you enjoy sitting in on a screening of your own films with an audience?
Wolkstein: I think we have different answers for this one. (Laughter)
Radcliff: Yeah. (Laughter) I can’t stand being in the room and watching it with an audience. I actually have avoided doing that as much as possible, because I find myself being too nervous. It’s too much anxiety for me. Also, because it’s not a comedy, it’s not the kind of movie that will elicit audible or visible reactions from audiences most of the time. I’m always just in there speculating the worst case scenario of what an audience might be thinking at any time. For me, I have a hard time doing that.
Wolkstein: And I really enjoy it for some reason. I like experiencing watching something with people in the room and seeing how people are reacting. It feels like a different movie every time when I watch it with a different group, so that’s really cool. I really cherish that experience of being in a room with people and watching the same thing and reacting the same way or different ways to the same thing that we’re all watching.
Radcliff: I love it too, except not with my own movie. (Laughter)

“The Strange Ones” is in theaters now and is also available on DirecTV.