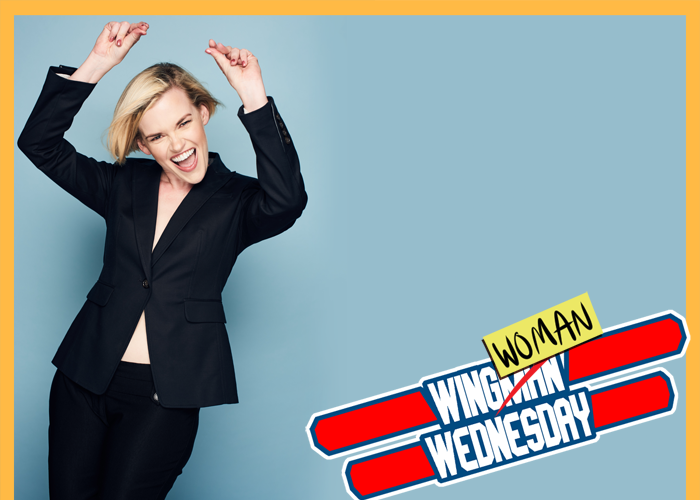 Kari Wahlgren has been giving life to animated characters for decades. As a sought-after voiceover actress, the Kansas native has lived within the worlds of such diverse shows as “Kung Fu Panda: Legends of Awesomeness,” “Gravity Falls,” and “Teenage Mutant Ninja Turtles,” to name but a small sampling. She can currently be heard as Dorothy in “Dorothy and The Wizard of Oz” for Boomerang, as Amanda in “Bunsen is a Beast” for Nickelodeon, and will soon arrive in theaters as a part of “The Nut Job 2: Nutty by Nature.”

We recently sat down with Wahlgren to discuss how her theater background helped shape her career, nailing the voice of a character right out of the creative gates, and whose lips she’d like to speak from in the future.

TrunkSpace: We know that you studied theater in college. Did that prepare you at all for a career as a voice actress in terms of not only how to use your voice, but how to project it in a particular way?
Wahlgren. Absolutely. Not everybody comes from a theater background, but I know, for me, that it really helped with the voiceover side of things. I had a chance to do some children’s shows while I was there and it was very much exploring that heightened characterization and some of the funnier dialects and things like that. I took a number of dialects classes while I was there. I feel like so much of what I did there, even right down to Shakespeare classes, really prepped me for the voiceover world in ways that I really didn’t expect or realize until I started working in the industry.

TrunkSpace: Actors often talk about how they need to change their approach when they go from the stage to the worlds of film and/or television. What about going from all of those various mediums to the world of voiceover? Does that require another change in approach?
Wahlgren: It sounds obvious, but the thing to remember in voiceover is that you’re communicating everything through the voice. You can’t rely on a facial expression or body language or any of these other tools that you use in stage work or film and TV work. The best example of this I can think of is a story that happened to me very early on in my career. I was doing a line and the director said, “Okay, great. Do it again, but angrier.” I did the line again, and he said, “Okay, your face looked angrier, but your voice sounded exactly the same.” (Laughter) It was a good learning moment for me. “Oh, I have to convey that just through what I’m doing vocally. I can’t supplement it with what’s going on with my face.”

TrunkSpace: Does that mean it’s a more difficult form of acting given that you’re only using one tool from your toolbox? 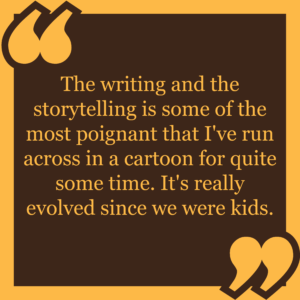 Wahlgren: It can be trickier. There’s definitely a technique to it. I’ve been in certain sessions where there are people that are not used to doing voiceover work, and they will hit the mic stand or they’ll wear really loud jackets. They’ll wear a leather jacket, which gives off a lot of noise in front of the microphone. There’s a technique side to it that is distinctly special to voiceover. Now that some of these movies are getting much more cinematic, the acting style can be much more subtle, and that’s where you hope that you’ve got a really good director that’s going to say, “You know what? You don’t have to give us that much on that line because, visually, this and this and this is going to happen in the animation.” It really is becoming more collaborative and cinematic in that way.

TrunkSpace: We’re children of the 80s, an era where cartoons were nowhere near as sophisticated as they are today. Kids and parents can both watch a show like your new series “Bunsen is a Beast,” for example, and enjoy it or laugh at it for different reasons.
Wahlgren: And that’s great, although being a cusp child of the 80s and 90s as I was, I loved a lot of those shows, too, and there’s something nostalgic about going back and watching them, even though they weren’t very sophisticated. There was just something about them that was just so cheesy fun! (Laughter)

TrunkSpace: Cheesy doesn’t really seem to fly these days. In many ways, the animated shows being produced now come off like scripted live action series.
Wahlgren: It’s really going in that direction. They are just making some beautiful shows. I’m doing a Netflix series called “Spirit Riding Free” and it’s so cinematic. It’s this beautiful 3D animation. The writing and the storytelling is some of the most poignant that I’ve run across in a cartoon for quite some time. It’s really evolved since we were kids.

TrunkSpace: It must be inspiring to work on a project every day when you know that the end product is not only going to be great in terms of the storytelling, but also be visually captivating at the same time?
Wahlgren: It’s fantastic. I’m such a fan of artwork and animation that whenever I get to start seeing the character designs and what the city or the town that the cartoon is taking place in is going to look like, I find all of that incredibly magical. It doesn’t get old for me.

TrunkSpace: When it comes to finding who a character is in the world of animation, are you provided with those character designs before you start working?
Wahlgren: It depends on the project. When we audition, sometimes we will have a picture, sometimes we will have a description of the character, sometimes we will have almost nothing to go on. In that case, you use your imagination and you create the story in your head and flesh out the character. Once you get the job and you start working, hopefully, at that point, you’ve got a little bit more of the working artwork, the tone, and style of the show. For instance, something that you watch on Cartoon Network may have a very different style than something that you’re going to watch on Disney.

You basically pull clues from whatever you’re given. If there’s source material, if it’s something that’s based on a graphic novel or a comic book or something, I’ll definitely read those. You just use whatever you can to help you come up with your characterization and then you go into the studio and it turns into a little bit of a collaborative process. Sometimes you go in and you knock it out of the park right away, and they say, “That’s exactly what we thought the character would sound like,” which was the case with Amanda in “Bunsen is a Beast.” She didn’t really change much at all from the audition. They said, “You came in and that’s exactly what we had envisioned her sounding like.”

Then there are other times where you go in and you end up doing something completely different than what you auditioned with and it just evolves over time.

TrunkSpace: How does that differ from when you’re working on an existing character, especially these big brands where the character you’ll be playing has been around for ages in various platforms and iterations? Is it more challenging to create something from scratch or to find the voice of a character who has already existed in some form or another?
Wahlgren: That’s a great question. In some ways, I think it makes it easier because if you’re doing Mary Poppins or something like that and you have an idea of iterations of that character that have happened in the past or you’re doing a superhero and it’s been pretty clearly defined in one or two movie roles, and they say, “Yeah, we’re gonna kind of go with that same sort of feel,” in some ways, that makes your job easier. In other ways, it gets a little trickier because people are always going to prefer one person’s interpretation over another person’s interpretation. Or, there are constantly reboots happening, so sometimes they’re trying to steer away from something, but they don’t really know exactly how, so it comes with its own unique challenges while also sometimes being a little bit easier.

TrunkSpace: We read that your inner nerd rejoices when you get to play comic book characters. Is there a character that you have yet to play that the inner nerd would cheer the hardest for?
Wahlgren: I did Black Canary once for a couple of little shorts, but I would love to do her again because I’m a big “Birds of Prey” fan. That’s one that I read a lot. I would love to play her again. For a while there, I was thinking Power Girl. I thought Power Girl would be a fun one and Squirrel Girl. She’s the hip, cool, little character now. That would be fun to play. 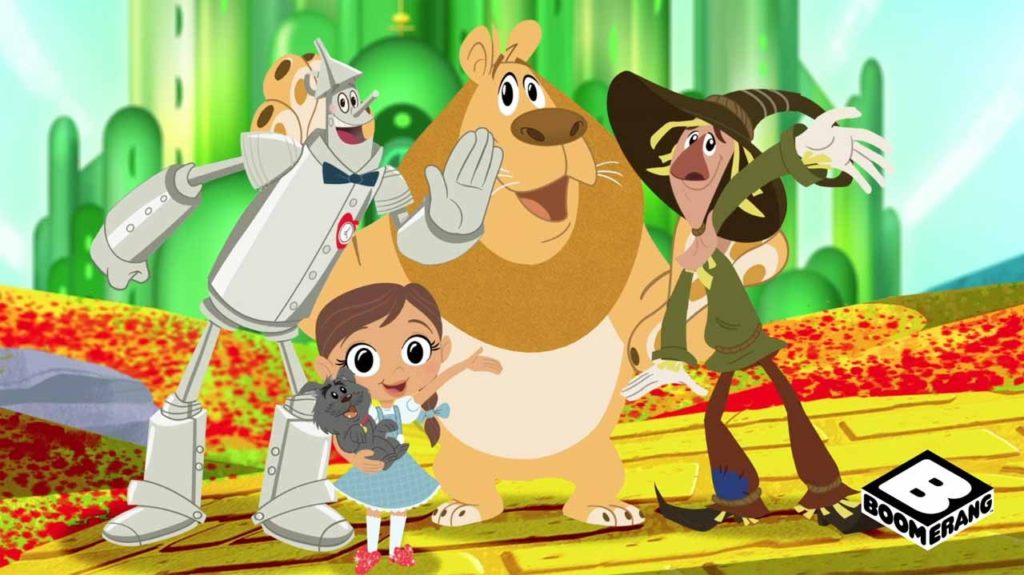 TrunkSpace: What’s cool about the way your career has played out is that you’ve been able to play big characters from both DC and Marvel.
Wahlgren: It is one of the awesome benefits of voiceover, but it’s funny… whenever I have a day where I do a DC job in the morning and a Marvel job in the afternoon, I always vaguely feel like I’m cheating somehow, like I’m slinking off and cheating on my boyfriend. (Laughter)

“The Nut Job 2: Nutty by Nature” arrives in theaters August 11.