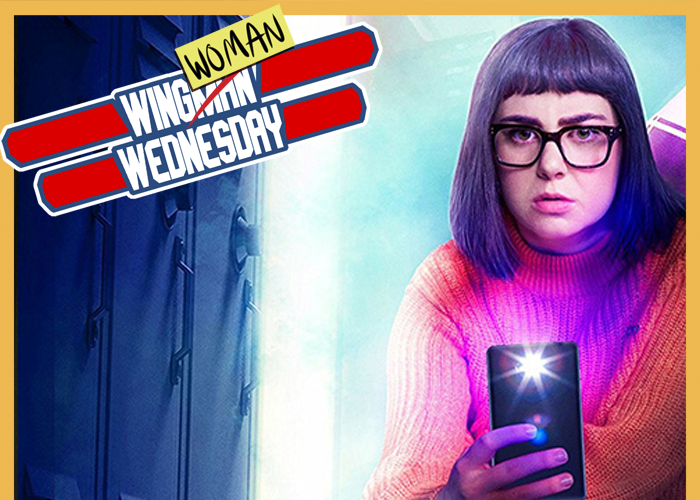 Fans of “Scooby-Doo” can attest that amateur detective Velma is one of those characters who, although iconic in look and sound, had the potential to be developed out much further than her animated arcs allowed. Thanks to the new movie “Daphne & Velma,” a live action origin story, we’re learning more about what makes Miss Dinkley tick other than hidden clues and oversized turtlenecks.

Sarah Gilman plays the jinkies-delivering, orange-clad super sleuth in training, and while she gives us some of Velma’s greatest hits via her performance, the LA native has also created a fresh take on the character that feels accessible for first-time Scooby viewers, but also familiar enough to appease the parents watching alongside of their kids.

We recently sat down with Gilman to discuss dog sweaters, making Velma sassy, and why she was scared to screen the film for longtime fans of the franchise.

TrunkSpace: Before we jump into the meat and the potatoes of the questions, we have to point out your incredible wardrobe on “Daphne & Velma,” especially that amazing dog sweater! (Laughter)
Gilman: Yeah. Kara Saun, the wardrobe designer, worked on “The Descendants.” Some of my friends were on that actually, and I knew of her before she came on the project, so I was really excited. A lot of the pieces were handmade – hand-designed – like the dog sweater. The sleeves were cut off and the dog was colored in by hand. So a lot of it was just her own creation instead of store bought items, which was really cool.

TrunkSpace: The plot of “Daphne & Velma” takes place during a time in the characters’ lives that fans haven’t really seen yet. Did that you give the freedom to bring your own spin on the character?
Gilman: Oh definitely. I actually worked a lot with director Suzi Yoonessi and even the producers, especially Jen Tisdale, to kind of brainstorm exactly what kind of Velma this would be because we do know very little about Velma from “Scooby-Doo.” We know that she’s smart, she’s pretty sassy, she’s… not to stereotype her, but the brains of the operation for the most part. But we really don’t know much about her. She’s a pretty flat character, as are most cartoons, I think. So we really took the time to kind of decide what we were gonna make her into and she’s a lot edgier and more independent and a little more vulnerable than I think anyone was really expecting her to become. It was really fun working with them. And also, they gave me a lot of creative freedom to kind of put my own personality into her as well, so I made her really sarcastic and kind of sassy. I really, really liked that, because I got to use some of my own improv into kind of creating her edge a little bit.

TrunkSpace: On the opposite side of that coin, is there still pressure to deliver on the character in terms of what fans will expect when they sit down to watch? 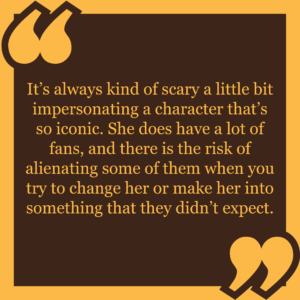 Gilman: Yeah, it was kind of a scary line to tow, trying to make her into this new 2018 Velma, but at the same time keeping her as the original Velma that premiered in 1969. It’s always kind of scary a little bit impersonating a character that’s so iconic. She does have a lot of fans, and there is the risk of alienating some of them when you try to change her or make her into something that they didn’t expect. But there were a lot of areas – tropes, I guess – from the original cartoons that we adopted into this movie, like the glasses and she says, “Jinkies.” And the editors did a really good job of using some of the iconic “Scooby-Doo” flairs, like the eyes following us in a painting and adopting them into 2018 and making them a little more modern. I think the movie does a really good job of blending the old and the new. There are new aspects of Velma and Daphne that haven’t really been seen before but there’s also pretty recognizable aspects that you kind of need in any “Scooby-Doo” film.

TrunkSpace: Probably like the jinkies line, for example. If you didn’t have that, fans would have called the movie out.
Gilman: Yeah, and it was funny because – and this is by no fault of anyone, it’s not even a bad thing – but I think there was a little bit of a fear of making it too tropey, if that makes sense? So in the original script there were no jinkies, there was no, “Where are my glasses?”, there wasn’t any of that. I was able to work on set with our director and the producers to kind of add those things in, so they were actually added in on set and not in the original script.

TrunkSpace: You recently got to screen the film alongside a group of “Scooby-Doo” fans. What was that experience like?
Gilman: It was the first time I had screened it with anyone other than my parents and a couple producers. Technically it was the world premiere at C2E2 in Chicago. It was in a really large room with a lot of people and some people were dressed as Velma and Daphne – cosplayers that looked amazing. It was really nerve-racking because at the same time they were all adults, and while I hope adults like this movie, the demographic that it’s kind of aimed towards is a younger audience. So it was really scary because we had a panel afterwords and I was acutely aware of the fact that if they didn’t like it, then I’d probably get that feedback when we did the panel. Luckily it seemed that it had a really good reception. There was a lot of laughs when there was supposed to be laughs and multiple people came up afterwards and expressed how much they liked the new Velma and the character and how they felt the movie did it great justice, which was really nice because I was very scared the whole time watching it. (Laughter)

TrunkSpace: You grew up in Los Angeles. Do you think being that close to the industry had a hand in you wanting to be a part of it?
Gilman: Definitely. My parents are not connected to the industry in anyway. Neither is my sister. My dad was a police officer and my mom is an accountant. We had no connection whatsoever. It kind of happened by chance and I think if we hadn’t been in LA, we wouldn’t have moved from, let’s say Texas, or Arizona, or even Seattle, where some of my friends are from. I think it was only because we were in such close proximity to the auditions and the work that it was able to work out. It was luck, I guess.

TrunkSpace: On Twitter you list yourself as an aspiring filmmaker. Is that a direction that you’re hoping to steer your career in moving forward?
Gilman: Yeah. I graduated high school and went to USC as a theater major, thinking I would pursue acting, and of course I have, especially out of school. Half way through school I actually applied internally to transfer into film and TV production at the film school at USC and I was accepted, so now I am currently studying film and TV production with an emphasis in directing and producing. I’d still say acting is my first priority, but director/producer is definitely something I’d like to have knowledge about as I continue and hopefully can one day make my own projects and explore other roles. I have a couple of friends who are filmmakers and they’re always sharing knowledge with me. For example, when I do eventually start making my own films, one of my friends was telling me about investing in some DCP tools. Apparently, they’re really helpful when you’re creating your own films. When I start creating my own stuff, I’ll definitely have to look into getting some software to make my films look better. However, I think also just knowing the other side of the camera makes you a more empathetic actor.

“Daphne & Velma” is available today on DVD, Blu-ray, and VOD.