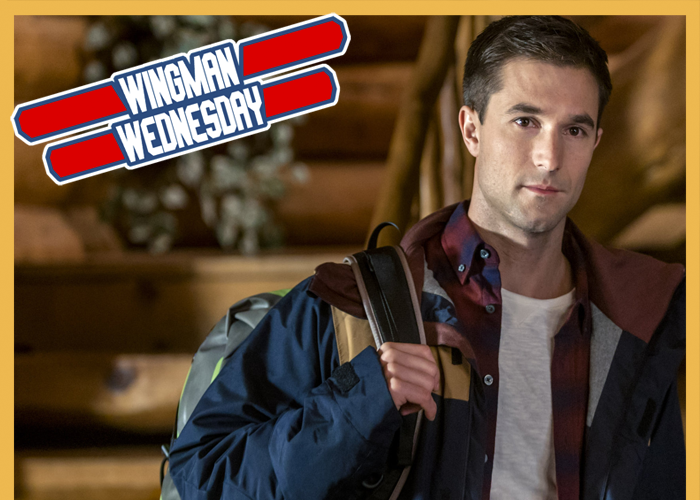 We recently sat down with Turner to discuss reuniting with his “My Summer Prince” costar, why he would hang out with his character Ben in the real world, and the reason he left his job at Google after five years.

TrunkSpace: This isn’t your first time working with Taylor. Was coming together on this movie by design or was it a bit of a surprise for you?
Turner: Taylor was working with the production team a little bit and was able to suggest some names and it ended up coming my way. I was really happy to get it and it was great to have the chance to work with Taylor again – she’s brilliant to work with. It was also fun to get the team together after “My Summer Prince,” which is probably one of my favorite times on set.

TrunkSpace: On-screen chemistry is so important to the success and believability of Hallmark Channel movies. Because you two have worked together in the past, did that allow you and Taylor to jump right into the material and hit the ground running?
Turner: Yeah, totally. I think that chemistry comes from really good listening. I think that that’s the majority of what chemistry is on camera. When you trust that someone’s going to be there and be prepared and be ready to listen to you just as much as you’re ready to listen to them, then it takes a lot of the pressure off and no one’s just thinking about their side of things. It becomes a very interactive acting experience. I think that definitely having worked before and trusting each other the way we do, we could sink very quickly into daily routines of running lines on the way to set, running lines on the way home, and then, “See you tomorrow morning.” It was all very straightforward.

TrunkSpace: And in that, it must give you a sense of comfort off-camera as well – a sense of ease within the job itself?
Turner: Definitely. Simple stuff that makes things really easy. There wasn’t a grocery store nearby and Taylor had a car and I didn’t, and so when she was on set, she’d let me use her car so I could go and get groceries. It’s simple stuff – some surprising teamwork that makes those kinds of experiences even more enjoyable. 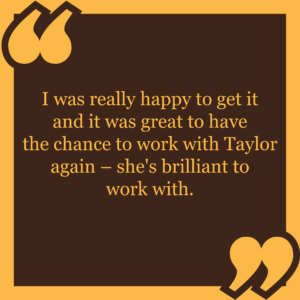 TrunkSpace: From our understanding, working on Hallmark Channel productions is an extremely efficient process, which makes sense given how many new movies the network airs each year. From an acting standpoint, how does that efficiency impact what you’re doing as a performer?
Turner: I personally like it. There’s not too much time to overthink things and so you trust your instincts and maybe get some direction to try some different options in takes, leave it behind and move on to the next thing. This film was a 15-day shoot, but my days were condensed into 10. I shot my side of things, the scenes that I was in, in 10 days, which is a very quick shoot for a film. I like that a lot because you just get in that rhythm and it’s very focused.

TrunkSpace: That also must allow you to pursue more projects throughout the course of a year when you’re not committing yourself to a six week or longer shoot?
Turner: Totally. I’ve been quite lucky with the shoots I’ve done. I’ve done more condensed shoots in terms of the amount of time that I’ve been on them. I’d love to do an extended TV show, but it’s also great for me to… I only came to this five or six years ago, so I’m getting loads of varied experiences through lots of different sets and lots of different roles and that’s very enriching.

TrunkSpace: When it comes to your character Ben in “One Winter Weekend,” is he someone who you could see yourself hanging out with in the real world? Was it easy for you to connect with him?
Turner: It definitely was easy to connect with him. He’s a CEO of a company but almost reluctantly so. He started the company, it went public, and he’s beholden to the board of directors and the shareholders. He has a bit more of an entrepreneurial mentality, combined with an easygoing nature, and isn’t strictly business. I think he’s become a bit jaded that his baby isn’t his. His vision isn’t really being fulfilled anymore and the company’s products aren’t being innovative and he needs a weekend away to get some perspective on some of the issues he’s been having in the company and also in the press, and then of course, he meets Cara.

TrunkSpace: And the conflict then arises because she is essentially the press, right?
Turner: Exactly right. Good research.

At the beginning of the film they both book the same chalet and neither of them are happy about it. To ease the tension, their friends that they’re with suggest that no one talks about work for the weekend because we’re all going to be sharing space together and it should just be a fun time.

TrunkSpace: Hallmark Channel programming continues to grow in popularity. Why do you think that is?
Turner: I think it’s really family friendly, simple entertainment. Simple is the wrong word, but in contrast, simplicity can be elegant in that you have characters who are dealing with very relatable problems, and over the course of the film and the obstacles that they go through, they learn something that is universal about themselves and come out the other side. It can be a very clear learning experience for the audience as well as the characters. I think they’re quite elegant in the ease that the scripts and the films have.

TrunkSpace: You have one of the more interesting journeys in becoming an actor that we’ve read about. Firstly, you studied psychology and we have to imagine that having that knowledge must be pretty beneficial in an industry where there are so many different types of personalities?
Turner: Definitely. Both in terms of the characters you play and also on-set dynamics. That’s where professionalism really comes into play and I was fortunate that I worked at Google for five years and had a heavy dose of professionalism there. I feel like I have good training, if you like, for working in film and TV. The funny thing about the psychology degree is that the way psychology has gone for the last 15 or 20 years, it’s become very scientific. The degree was almost closer to neuroscience or neuropsychology rather than observable human behavior. In a way I feel like acting school, which I did at night while I was working at Google, and then working in film and TV, is the education in psychology I always wanted and also the expression of what I’m interested in. But nevertheless, I really recommend studying psychology if you are interested in it. You can even take online psychology courses so that it can fit around your life a bit more.

TrunkSpace: Like you mentioned, you worked at Google for five years, which is a company that a lot of people are running towards, not from.
Turner: (Laughter) I know. Google is a great job, so I like to joke that it was a series of unforgivable mistakes leaving that place.

TrunkSpace: And it was while you were there that you planted the seed for what would ultimately become your acting career?
Turner: Yeah, it was. I thought I’d go to an acting class for a couple reasons. Partly because of the psychology background and because a few really close friends and family said it could be a good fit as a hobby. I also thought it might help me at work. A lot of the executives do actually use acting coaches in order to help them dealing with different personalities or in helping themselves. Maybe some people need to be more assertive, some people need to listen better, some people need to present with more authority, or maybe even less authority. Acting can be really helpful for executives.

So I went to a class and just instantly fell in love with the rooted but spiritual nature of it. I just fell in love with it and became hooked and did a two-year class while I was in San Francisco at night, two or three nights a week. Then came a time where I was prepared and ready to leave the fold of Google. There’s no regrets, but it was a very difficult decision.