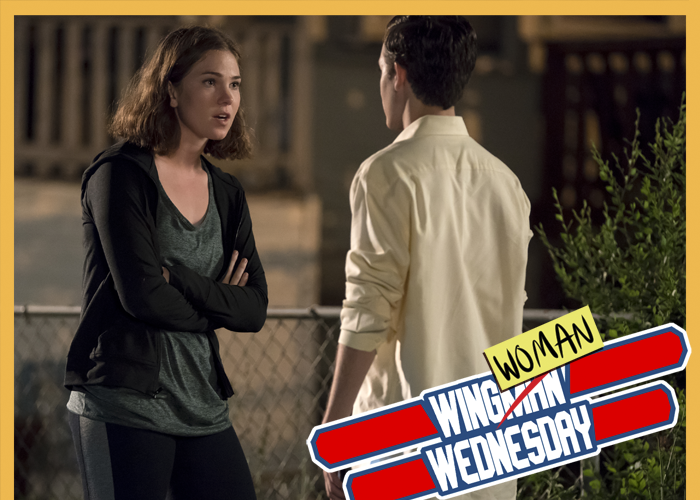 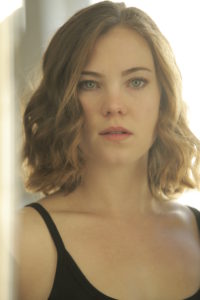 Hollywood loves a “fresh face,” someone the industry can count on to draw eyeballs to future film and television projects, and when those perceived overnight successes also bring their acting A game, it’s hard for an audience not to pay attention. One of our newest on-screen obsessions is Jess Gabor, who joined the cast of Showtime’s “Shameless” this year as Kelly Keefe. The future is bright for the California native, and unlike the sun, which we’re told we should never look directly at, we don’t seem to want to look away from this particular star.

We recently sat down with Gabor to discuss big news in bathroom stalls, why working on “Shameless” is like being in a master class, and the YA property she would love to bring to the big screen.

TrunkSpace: What emotions were you juggling when you found out you were going to be working on such a critically-acclaimed show like “Shameless?” We have to imagine there’s a mixture of excitement and nerves in something like that?
Gabor: It’s funny, the week I had auditioned for “Shameless,” I was also testing for a new pilot. The “Shameless” audition came during such a weird and stressful week that I didn’t think much of it. The following Monday, my manager broke the news that I did not book the pilot but that I had booked “Shameless.” This all happened on a whispered phone call from a handicap stall I was hiding in during my shift at my restaurant! I don’t think I processed how cool it was until I was shooting in the famous Gallagher house. And that’s when the nerves had finally caught up to me!

TrunkSpace: We’re living in the present, sure, but it’s hard not to look into the future sometimes. With that said, how important is a job like this to your long-term career journey?
Gabor: Isn’t that the challenge! I think it’s always an actor’s dream to hit a big break on their first try. But speaking long-term, working as a guest on “Shameless” is a perfect beginning for me. The show has an incredible reputation because it is so real and natural. And that reputation has helped me continue to work through the end of the year.

TrunkSpace: With “Shameless” being your first major role, are you looking at it just as much as a learning experience as you are a job, especially with the amazing cast that surrounds you?
Gabor: It is hard to even think of it as a job. “Shameless” is like being in a master class with all the best actors and scripts and, oddly enough, 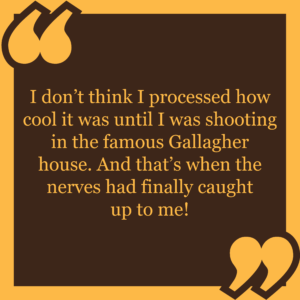 I am getting paid for it! I am inspired each day by the talent and work ethic each actor brings. It has changed my view immensely on how a cast member should act on set.

TrunkSpace: What are you enjoying most about getting to inhabit Kelly Keefe?
Gabor: Honestly? The stunts. I love the stunts. Kelly Keefe is this very athletic and strong woman who pushes Carl Gallagher around, both physically and mentally. Ethan (Cutkosky) and I are constantly having to do these crazy fight scenes with a stunt coordinator and stunt doubles. I love it!

TrunkSpace: When a series is successful, it can go on for years and years. Would you be comfortable playing one character for five, six, or even seven seasons?
Gabor: I don’t know if comfortable is the right word… I think I would be pretty terrified. (In a good way!) Merely because if the series is successful, it means the audience cares a lot about your character. So as the actor, I wouldn’t want to let the audience down. Managing that pressure while also continuing to find new and exciting choices would be a huge challenge. But I am definitely up for it.

TrunkSpace: Is there a series or fictional world that you’re a fan of that you’d love to sink your teeth into? If given the opportunity, what show would you jump on tomorrow?
Gabor: There is this incredible YA novel called “Starters” by Lissa Price. It has yet to be made into a series or film, but if it does, I would walk on fire to play the lead character, Callie. It is a riveting story about a post-apocalyptic world in which young people rent out their bodies for money. I won’t say any more spoilers, but yes I would jump on that opportunity.

TrunkSpace: Was acting always the only path that you intended to travel or did you have a plan B at any point? Is this just as much your destiny as it is your passion?
Gabor: Unfortunately for my parents, there has never been a plan B for me. Before booking “Shameless,” I was set on working at a restaurant my whole life if it meant the possibility of working as an actor. I have never felt so pulled to something as I have been to storytelling.

TrunkSpace: What is your favorite thing about acting beyond the work itself? What keeps you excited to wake up every morning and pursue this as your career?
Gabor: I really enjoy connecting with people. Each set experience brings new and interesting people from all walks of life. I love getting to meet them and hear their stories.

TrunkSpace: You just wrote and produced your own film, “Her Story.” Is that an aspect of your career that you hope to continue to pursue, creating and producing your own content?
Gabor: 100 percent yes! I truly never thought I would have a desire for producing or writing until making “Her Story.” I learned that I take great delight in being part of the whole movie-making process, not just the on-screen time. Especially when you get to see the film transform from script to the big screen.

TrunkSpace: We started out our chat mentioning the future, so, time machine question! If you could jump ahead 10 years and get a glimpse of what your career looks like a decade from now, would you take that journey? If not, why?
Gabor: That is tempting… but no. What would be the point of the journey if I already knew the destination? I have had all these weird, ironic things happen to me in my career so far and looking back, each of those things that did or didn’t happen led me here. Being able to know the future would drive me crazy ‘cause I would wind up second-guessing all my choices.

“Shameless” returns to Showtime in January.