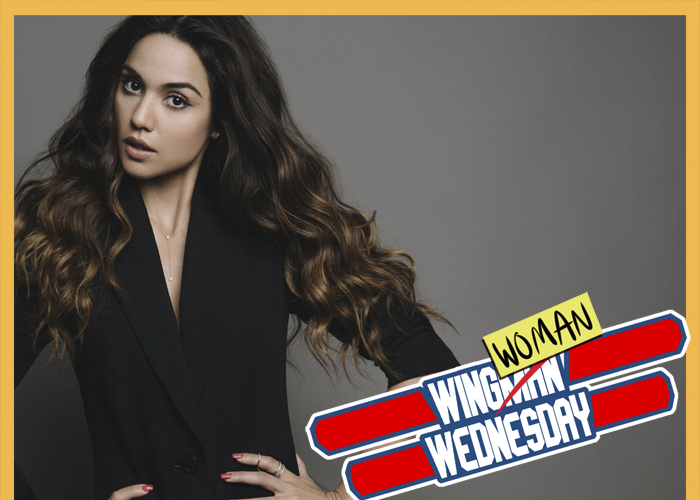 One of our favorite shows these days is “The Magicians.” There are a great many reasons why the series has cast a spell over us during its first three seasons, but the most prominent of these entertaining factors is actress Summer Bishil. The California native shines as bright as the tip of a wand in her portrayal of Margo Hanson, a character we love to hate and hate to love, but even she admits that the ringer of zingers may have had difficulty achieving fan favorite status had they not highlighted the Filory ruler’s vulnerable side.

We recently sat down with Bishil to discuss how “The Magicians” has impacted her life, the Buffy parallels, and why she is most comfortable on a series that is willing to take risks.

TrunkSpace: You’re currently in year three of “The Magicians.” Aside from the work itself, where has the series impacted your life the most?
Bishil: It’s kind of transformed my life in all aspects. It’s really informed who I’m able to even spend time with because I’m living out of the country for five months out of the year. I didn’t know anybody in Vancouver when I first got there. I didn’t have time to go out and meet people outside of my cast so that’s really my world for five months – the crew and the cast and the people that I work with. Then I come home to LA and have this other second life. Just on a practical, geographical level, it’s affected my life.

This is the first time I’ve ever really had a steady, steady gig this long so it allows me to sort of relax a little for the first time. I’m not constantly hustling to that next job. You can sort of take a step back and be a little pickier because you’re making your income. You don’t have to run around like a crazy person.

TrunkSpace: That must allow you to live in the moment more.
Bishil: It really does. This is the first year where I was able to step back because the first year I was so worried about doing a good job and then the second year, pretty much that as well. But, by the third year, you know who your character is so you can relax and enjoy a lot of the blessings that come along with being on a show for this long. Your life is just more comfortable because you’re happier… you have a job.

TrunkSpace: From a performance standpoint, what has the experience been like for you to spend that much time – over 30 episodes now – with one character and see her grow in ways that perhaps weren’t who she was when you first read for the part?
Bishil: Well, part of the reason I’ve always wanted to expand on Margo and expand on who she is is because I watch a lot of episodic television and I watch for existing formula and the thing that sticks out the most with a great performance is when they evolve, when they change, and I haven’t gotten bored after watching for four seasons, two weeks in a row. When you watch a show like that, you really see how crucial it is to continue to add dimension and change your character because people will get tired. They’re looking at you, a lot of times now with binging, every day for a month. And if you’re tired, if you’re bored of something on set, then they’re probably gonna be bored of it, watching back to back.

TrunkSpace: That’s a really excellent point. Because of how people consume television now, it is probably much easier for an audience to see when and where a character is sort of idle because they’re sitting down with the episodes all at once. 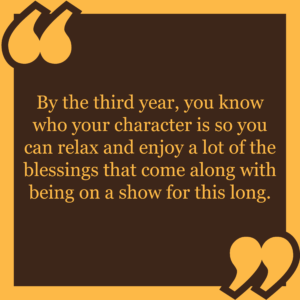 Bishil: Exactly. And you have missed those characters more too, like in the old days. I’ve always liked television, even when I was a kid. My parents would let me watch and it wasn’t a thing in my house. I liked “Will & Grace.” I thought it was hilarious and I liked it. I liked the comedy. Now that I’m an actor, I know what I like and it’s the performances. I would rush home every week and wait to see it, and so when you have that much faith in something you really love and you have a chance to miss it, you’re not gonna be as critical as you would if you were binging. I’ve watched “Buffy the Vampire Slayer” a couple times now, all the way through, to study it actually, and what I think made it so successful is that Sarah Michelle Gellar really switched it up.

TrunkSpace: As did the supporting cast around her. Everyone grew, which made the grounded aspects more believable.
Bishil: Yeah, exactly. That cast always expanded as well, kinda like ours. I think that’s one of the reasons why “The Magicians” works because we really have a huge cast of regulars and then, in addition to that, we have so many recurring characters, so many great actors, that come in and out of our show.

TrunkSpace: Another thing you get with the “The Magicians” that also relates to “Buffy the Vampire Slayer” is the really rich dialogue that manages to walk the line so perfectly between drama and comedy.
Bishil: Yes, you do. On “The Magicians,” especially the Eliot/Margo/Filory storyline, we deal with a lot of fantastical situations and high stakes scenarios that are really drawn out with comedy. There’s constant humor running through it so it can be challenging to figure out the tone that you should deliver your lines in. Honestly, a lot of the times it’s a game of experimentation for me. I don’t like to go to set with one idea in my mind of, “This is how the scene’s gonna play.” Every time I’ve done that, I’ve been unhappy with the edit. I like to just give as many options as possible because, a lot of times, my instincts I do trust and 99 percent of the time they’re right, but sometimes you’re not seeing something. If you’re not taking direction, the performance is gonna suffer if you don’t have other insights.

TrunkSpace: We would imagine that it all changes depending on who you’re in a scene with as well. The energy changes.
Bishil: Exactly. On our set, given the world that we’re playing in, a lot of times, the variables are changing a lot. Drastically. Constantly. You can’t be set in your ways.

TrunkSpace: You talked about finding the tone of a specific line, but just finding Margo’s tone in general seemed like it might have been something that was a malleable process at the start because she’s somebody that, in a lot of ways, we should hate, but we can’t help but love.
Bishil: Well, thank you for saying that. I think what I read when I read Margo in Season 1 was the potential for how much vulnerability was there, but also the potential for how much she could be hated, like you said. I kinda knew that and I wanted to really play against that in fact. I was a little scared sometimes because some of the stuff that was coming out of her mouth, stuff that my character was engaging in, wasn’t always emotionally sympathetic. I definitely wanted to and tried to figure out a way to make her appealing and sympathetic and not grating on the audience because, you play it a certain way, it could have gone the other way.

TrunkSpace: You mentioned how you were a fan of “Will & Grace” when you were younger. That’s a show that, even during its heyday, was very safe for the network, but now you have places like SYFY taking these huge leaps in terms of how they present their content and they’re really raising the bar and pushing the boundaries in terms of what we’re seeing and hearing. Is it freeing as an actress to be on the forefront of this less censored wave of storytelling?
Bishil: For me, my background and what I’ve done in the industry, my career background, it’s definitely more comfortable to be on a show that’s taking more risks because I’ve done kind of controversial stuff. I’ve not been in very PC stories, so I think I would feel probably very stifled if I was on a show that had to mind its Ps and Qs for the sake of some arbitrary rule which applies to them. That would just get so boring because it is boring storytelling, I’m sure, for who gets written for and how they get written for, obviously.

I’m glad I’m on a show that does that, for sure. Sera Gamble and John McNamara , they’re pretty fearless and they’re gonna take the risks that they want to take and that’s why the show’s good.

TrunkSpace: Which is great, because in its current form, “The Magicians” is probably a show that wouldn’t have made it on the air even a decade ago.
Bishil: Probably not. It probably wouldn’t have. I think it would had been cast very different. I don’t think both me and Arjun (Gupta) would be in the cast. This experience of just being cast and auditioning for so much, I don’t think that would have happened 10 years ago. Even if it did get made, I think it would have been a vastly different show and it would’ve just clipped the wings that makes it good.

TrunkSpace: One of the things about the show as a whole is that it sort of has this underlining message of diversity and acceptance. Was that something that you could feel in the early going, even before you first stepped on set?
Bishil: You know, my casting alongside Arjun, I thought was more progressive than I had seen in other castings and in other ensembles that I auditioned for. I thought that was a great step. The material that I got was not weighed down with any stereotypes. There were no limitations put on Margo because they had now hired a woman of ethnicity, which sometimes happens. Some shows are like, “Well, we got to spend an hour talking about where she comes from.” (Laughter) They’ve never done that, which I appreciate.

TrunkSpace: Fans are still eating up everything that Season 3 has to offer. What were you most excited about headed into this season?
Bishil: I think this season what I was most excited about was that I had the eye patch to work with. It just gave me something else to do in my third year, which was really great. It wasn’t always easy and it definitely presented some challenges, but I was glad to have something challenge me a third year into a show because, it’s like you said, other shows, procedurals, I would be doing the same thing, probably wearing the same outfit, for literally this long. I can’t imagine. I think I would go crazy.

TrunkSpace: Imagine a doctor show, wearing the same set of scrubs for 13 seasons.
Bishil: At least you’d be comfortable when you do it. (Laughter)