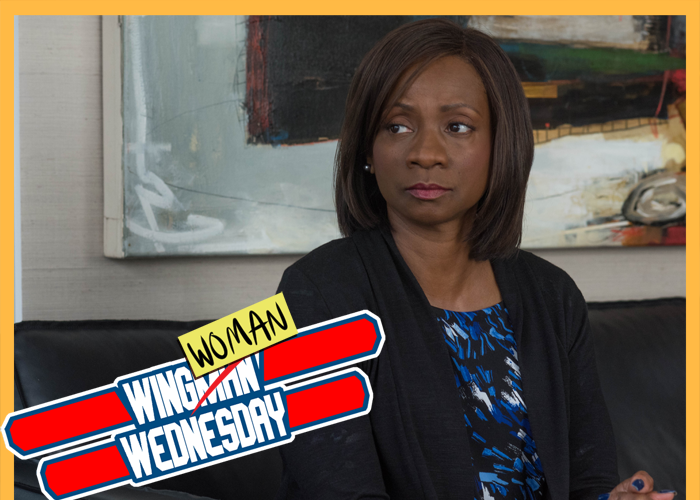 For fans of the western, the new Netflix series “Godless” is the greatest gift they could have received for the holidays. Gritty and gutsy, the seven-episode season plays out like an epic film that you can’t quite look away from, which is ideal for all of those who fancy an episodic binge.

And if “Godless” is the gift you unwrap for yourself this year, series star Elisa Perry, who also recently appeared in “Roman J. Israel, Esq.,” is the reward waiting for you inside. As Hobbs family matriarch June, the Pennsylvania native brings a strong and memorable character to the forefront, but does so with a soft touch – a delicate walk that she delivers brilliantly.

We recently sat down with Perry to discuss why “Godless” is so innovative, the most exciting aspect of getting involved in the project, and what she’s always marathoning via TV Land.

TrunkSpace: Your new series “Godless” is generating a lot of great buzz. In this particular day and age, especially given the way that people consume content, is there any better platform to be involved with than Netflix?
Perry: Listen, pretty much most of the stuff I watch is on Netflix, so it’s great that I’ll be able to watch something that I’m in on Netflix. (Laughter) They just have such original, such creative, no holds barred programming. “Godless” is a western, but it’s quite innovative. To be perfectly honest, it’s quite innovative from the perspective of women being such kick ass, gun toting cowgirls. It’s an exciting project to be a part of.

TrunkSpace: In a lot of ways it plays more like a film than a television series.
Perry: And I have to say, the way Scott (Frank) directed it, and his writing, it felt much more like a film. I kind of think that’s what he wanted, because he’s a screenwriter, and I think that’s his wheelhouse. It felt very much like that. And it looks like that.

TrunkSpace: For those who have yet to jump on their horse and binge the series, can you tell us about your character June and 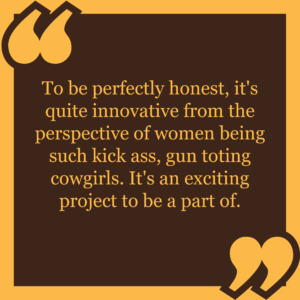 what her overall journey is?
Perry: June is the matriarch of the Hobbs family. It’s a family that migrated to Santa Fe. Her brother and her husband, they were former Buffalo Soldiers. Her brother, played by the amazing Rob Morgan, he’s pretty well-known for being this kick ass soldier who has a pretty big reputation, especially for that time. That’s something huge. June, being the matriarch of the family, is the person who kind of keeps it together, and sort of keeps her husband, Elias, who can kind of get a little caught up at times… she really works hard at keeping him levelheaded.

She’s a loving mother – she loves her children. She understands her daughter, played by Jessica Sula, very well with the feelings that she has for one of the young men in the town. She’s a pretty strong woman, but a very religious woman. Pretty much everything with her comes from a place of love, but when she has to be strong and she needs to pick up a gun, she will.

TrunkSpace: What did June offer you in terms of character traits that you have yet to tackle onscreen before? Was there something in her personality that you were particularly excited to dive into?
Perry: You know what, the biggest thing for me was the fact that it was a period piece – that it was a western. I love period pieces. I had so badly been wanting to sink my teeth into something that was historical. To play someone like June… listen, I’m an actress, but probably unlike most people, I get excited when they say, “Little or no makeup” because right when they say, “Little or no makeup,” what that says to me is, “Oh my goodness, there’s a lot of places I can go with this,” and that, “I won’t feel like I’m wearing a mask.” Even in the audition they specifically said, “Look as close to the period as possible.” I immediately got excited, because I was like, “Okay, this sounds like something that I can really sink my teeth into.”

For me as an actress, I had never done anything that far, and I had definitely never done a western. I had never been to Santa Fe. So everything about it was attractive to me. I just felt it, even going into the audition, emotionally. I was immediately emotionally connected to who she was and what I needed to bring to her. What I knew for me was the foundation of who she was, was someone who definitely came from a place of love and caring, but had a very grounded sense of strength about her.

TrunkSpace: When you’re working in a period piece, do you approach performance differently? Even though it’s grounded in reality, people presented themselves differently during different periods if history. Is that something you needed to consider when you’re taking on someone like June?
Perry: Yes. One of the things I definitely had to remind myself of was, my modern day feminism. She’s the woman of the house, but at the end of the day, her husband is in charge of that house. He is in the “man in charge.” There’s a moment in one of the episodes where she just has to really back off and let him be the father that he is. As painful as it is, once again, for that time, you had to know your place, at least this type of woman. She never goes to bars. She’s a woman who makes all of their own clothes. They grow their own food.

TrunkSpace: So in a way, it’s not only being true to the character, but being true to the time period as well?
Perry: Exactly. For me as an actor, those are very important. I’m one of those people who… I can get caught up. I can watch a movie and I’ll look and see where someone is supposed to be such and such a character. If they’re poor or they’re destitute, I’ll look and see, “But your eyebrows are waxed.” Not that that’s wrong, but for me, I’m just more detailed in that way. Even with my hair, as a black actress in this business – and this is a black woman period – our hair is always an issue. So, I really worked with the woman in charge of hair ahead of time, researching how my hair would be. I was like, “Just don’t give me some kinky, curly wig.” I wanted to be as true as possible because detail is very, very important. I wanted to connect as close as possible to everything that’s happening.

TrunkSpace: It’s like if you were playing someone who was deemed the “villain” of a story. You have to approach it as the villain would… what their motivation is… so that you can understand why they’re making the choices they are making?
Perry: Exactly! And why is that? Because there are moments when I’m able to merge how Elisa would handle it versus how the character would handle it, but the key is that it makes sense for me, as an actor, in that moment. 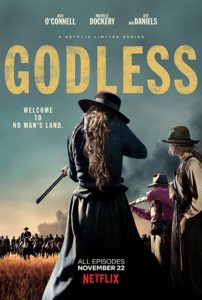 There’s a scene in “Godless” where we meet Jeff Daniels and his crew, and when you see it it’s like, “Oh God, why would that happen?” Even preparing for that I had to, once again, take myself on that journey of, “This is not an Elisa choice, this is a June choice.” Back then people could just show up at your house and you would offer them water, and you would invite them in and offer them food. Now, it’s like, listen, you don’t even let friends in who haven’t called. (Laughter)

TrunkSpace: (Laughter) If someone knocks on the door you’re not expecting, the move is to shut off the lights and pretend you’re not home.
Perry: (Laughter) Exactly! You’re like, “Are you expecting anybody? I’m not.”

I live in a building that’s pretty secure, which makes me even more nervous if someone is knocking on the door. It’s like, “How did they get in?”

TrunkSpace: In a lot of ways westerns seem more like a brand than a genre. Those who enjoy a good western will tune in to for a new one, even if they’re unfamiliar with the story. Did it feel like you were going into “Godless” with a bit of an established audience already in place?
Perry: Oh, absolutely! Let me just tell you, I am a huge western fan. I’m the person who watches marathons of “Bonanza,” “Gunsmoke” and “The Big Valley” every day. Now, I might be showing my age right now, but it’s called TV Land. (Laughter) My fiance laughs at me all the time. He’s like, “Okay, here we go…” I’m like, “Listen, you leave ‘The Big Valley’ alone. You better not mess with Audra Barkley!”

Being a woman of color, even with all of these westerns, it’s not that often that you see us in that time. For me, it was really exciting to be a part of this project where it was, “Wow, there we are! We’re right there. We did exist then, and we weren’t slaves. We weren’t working someone’s field. We’re a family, the Hobbs family. We have our own home. We have land. We’re known in the community.” That in itself… I think Scott Frank just really nailed it.