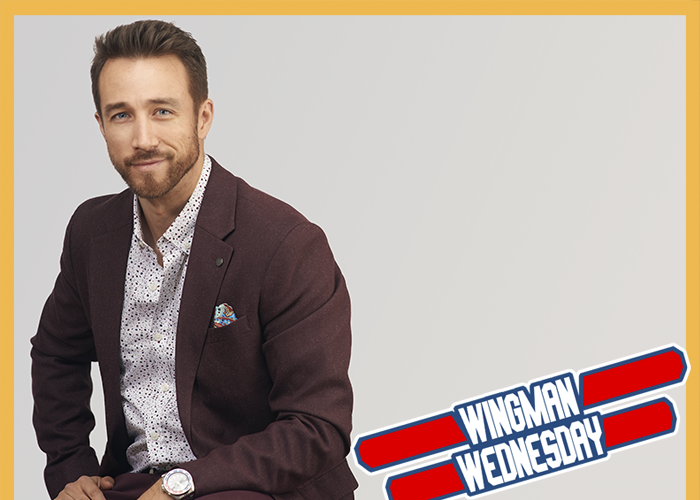 Growing up with a passion for baseball, aspiring Major Leaguer-turned-actor Brendon Zub envisioned a day where he’d be running base paths professionally. But like life tends to do, it zigs when you anticipate the zag, and now the Vancouver native is sharing screen time with caped crusaders in The CW’s “Batwoman.”

“I remember getting chills the first time I came to set and saw the Batcave rebuilt with Easter eggs to all previous Batman shows hidden about,” Zub said in an exclusive interview with TrunkSpace. “It was jaw dropping.”

We recently sat down with Zub to discuss script reveals, cast whale watches, and why streaming platforms help to keep his family informed on his career.

TrunkSpace: With the premiere of “Batwoman” behind you, does it feel like you’re now able to share your experience on the series with the world? Does it feel more real when it is out there and is being enjoyed?
Zub: Definitely! We shot the pilot back in March, so it was a challenge to stay quiet about it with all the excitement surrounding it until the show got picked up. Now that it’s aired, it definitely feels more real since we can talk more about the show, engage with fans, and share some of our behind the scenes pics and experiences from set.

TrunkSpace: Did you find yourself scouring the socials to see what the first impressions of the series were to long-time fans of the characters and how those characters were handled in a cinematic sense?
Zub: I see what comes my way, but honestly I didn’t go out and search social media myself. I still consider myself a newbie in the social media world. I’m not on Twitter and find managing my Instagram account challenging enough. (Laughter) I get tips and advice from my castmates on “Batwoman.” Camrus (Johnson), who plays Luke Fox on the show, is a good friend and tends to send me articles and help me when I have questions. That guy is a wizard on Insta and Twitter.

TrunkSpace: What would 10-year-old Brendon think about his future self getting to play in the DC Universe? Would it seem unfathomable to him at the time?
Zub: Yes, 10-year-old Brendon would have been completely shocked and probably even more confused. You see at that age, despite being a bit of a class clown in school, I was crazy into baseball. I lived and breathed that sport and all I could dream of at the time was growing up and playing in the Major Leagues one day.

TrunkSpace: When you’re working on a project like “Batwoman” where, although grounded in reality, anything is possible… do you have those pinch me moments on set where you look around at the costumes and set pieces and go, “How is this my life?” 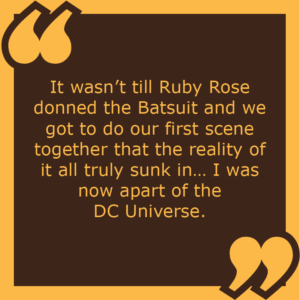 Zub: For sure, you can’t help but have those moments when you get to work with such a stellar cast and play around in such a legendary location as Gotham. I remember getting chills the first time I came to set and saw the Batcave rebuilt with Easter eggs to all previous Batman shows hidden about. It was jaw dropping. It wasn’t till Ruby Rose donned the Batsuit and we got to do our first scene together that the reality of it all truly sunk in… I was now apart of the DC Universe.

TrunkSpace: Your character Chuck seems to be carrying a few secrets with him. How much of his journey did you know going into your first day of shooting, and has that journey surprised even you in places as you have gotten further into production on Season 1?
Zub: I knew nothing day 1 except that Chuck Dodgson betrayed the Crows and was Alice’s lover. How that all played out, and his and Alice’s backstory, was a complete mystery to me. I had my theories but the writers kept their cards close and didn’t reveal much of anything early on. Over the course of the season, however, more of Alice’s and Dodgson’s relationship and backstory is revealed and fans will learn more behind their motivations.

TrunkSpace: We would imagine it’s fun to play a character where “not all is what it seems” because you’re getting to peel back those layers for the audience week after week. As a performer, does that episodic reveal make it just as interesting for you to shoot a project as it is for the viewers to watch it all unfold?
Zub: Yes, in fact, we feel much like the viewers ourselves week to week. Only difference is that we’ve just experienced things a few months earlier. Every time we got a new episode sent to us we’d all talk about it and share the same shocked reactions and theories that fans do now.

TrunkSpace: For fans, the final product of a film or series is always the most memorable part, but for those involved in a project, we’d imagine it goes much deeper than that. For you, what is something about your time working on “Batwoman” thus far that you’ll carry with you through the course of your life/career?
Zub: For me, it’s the friendships I’ve made on this show. Since most of the cast were new to Vancouver, I had the unique opportunity to show them around town and introduce them to all the fun and unique activities that Vancouver, BC has to offer. As a result, I grew pretty close to many of them on and off set. There’s been cast BBQs, and even a whale watching tour we all did together… memories I won’t soon forget. I will cherish the friendships made on “Batwoman” for a lifetime. 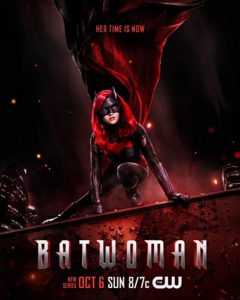 TrunkSpace: Beyond the weekly premieres, “Batwoman” will live on in streaming platforms where people can catch up or watch again as many times as they’d like. As an actor, do platforms like Netflix enhance the experience for you in bringing a character to life, knowing that they’ll live on for people in however they wish to consume the content down the line?
Zub: Yes. It’s especially important to me since many of my family and friends are scattered around the world in different countries and can’t watch it on TV. It’s been nice to just tell my brother, who’s halfway around the world and my biggest supporter, to just turn on Netflix and watch my show. Makes things easier.

TrunkSpace: What has been the highlight of your career thus far?
Zub: Well… a few months ago I’d probably say my Hallmark/Lifetime Christmas lead romance roles but now I’d have to say “Batwoman.” It’s quickly overshadowing my previous roles now… especially as the season progresses.

TrunkSpace: Time machine question. If you could jump ahead 10 years and get a glimpse of what your career looks like a decade from now, would you take that journey? If not, why?
Zub: Oh, that would be hard to turn down… but I kind of like not knowing what is around the corner for me though. It keeps me motivated to work hard for each and every thing in life and to seize every opportunity. It’s been an exciting roller coaster ride so far and not knowing what tomorrow brings is the fun part. Having said that… I may just take a quick peek.

“Batwoman” airs Sundays on The CW.