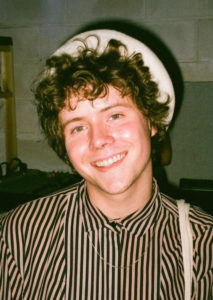 Like most creative people, Miguel Gallego, aka Miserable Chillers, questioned his artistic exploits in the early days of his musical journey. Although he started playing guitar as a preteen, it took him time to find the confidence in both himself and the sounds he was looking to give life to, but when he did, everything fell into place.

“I think the biggest thing that was missing, though, was just the sinking in of an obvious truth that I could do, or try to do, whatever I want musically,” said Gallego in an exclusive interview with TrunkSpace. “That I can and should follow my nose.”

And following his nose he has. The latest Miserable Chillers album, Audience of Summer, drops August 7.

We recently sat down with Gallego to discuss embracing sounds he used to find corny, looking beyond validation, and why releasing this album is both liberating and sad for its creator.

TrunkSpace: You have described yourself as a late bloomer. Does that also relate to your creative self, and if so, was the inspiration always there and you just didn’t discover the delivery method until recently or was it the spark itself that came later?
Gallego: I think the pull towards music as the way I wanted to express myself was always there. I loved to make up little songs when I was very little (titles include: “Stop Copying Me,” “Long John,” “I’m The Best Boy Ever Made”), and was drawn to this dinky Casio keyboard we had growing up. I started playing guitar when I was about 12 or 13 and started writing songs shortly after, but I think a lot of elements alluded me – a voice and perspective that felt my own, the confidence that I could pursue the kind of sounds I wanted to rather than the ones that felt most readily available, the sense that I had something to say, to share. I think the biggest thing that was missing, though, was just the sinking in of an obvious truth that I could do, or try to do, whatever I want musically. That I can and should follow my nose.

TrunkSpace: So with that said, would 10-year-old Miguel be surprised by this creative journey that you’re currently on?
Gallego: I’ve embraced a lot of sounds I used to find very corny, like fretless bass. I think 10-year-old me would be surprised that I’ve moved away at all from making rock music.

TrunkSpace: As you look into the future as it relates to your music and creative endeavors, what do you hope to accomplish with them? What would “success” be to you as it relates to being the songwriter and artist that you are? 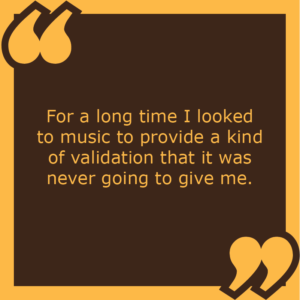 Gallego: For a long time I looked to music to provide a kind of validation that it was never going to give me. I’ve always struggled with this sense of doubt that the way I experience the world – the way I think and feel about things – is valid, or good. I’ve always felt very stuck in my head and like I’m missing something about the world around me that’s obvious to everybody else. So to share my music, something that feels very much my own, felt, for a long time, like an opportunity to seek that validation. It still does, sometimes, and I would love for anyone to hear my music and feel like it speaks to some deep, unshared thought or feeling. I would love for anyone to feel connected to by my music. But I also realized as I’ve gotten older that wanting validation from this practice was placing an undue burden on something that already gives me a lot. Just the act of making is deeply fulfilling in and of itself. I try to see the sharing of it as a cherry on top, rather than the end to making’s means. I don’t want to lose sight of that. And so, I just want to reach a few more ears, and to maybe get more opportunities to make more music, too.

TrunkSpace: Your new album Audience of Summer is due to drop August 7. What kind of emotions do you juggle with when releasing new material to the masses, and is the experience different this time around given that the entire world, essentially, has ground to a halt?
Gallego: I’m letting go of a lot – of a record that I finished making almost a year ago, before everything changed, both personally and in the world at large. Consequently, it’s like an index of a period of my life, of myself, that feels fundamentally different than the present. It’s a little liberating and a little sad to share it.

TrunkSpace: Normally you would tour to support a new release, but that is not something that is possible in every state right now. How has promoting the upcoming album changed? How do you get the word out when people can’t get out themselves?
Gallego: I’ve always relied on social media and word of mouth from friends to share my music. Miserable Chillers has never really toured, just played around locally and done a few out of towners here and there. I would very much love to play this music out, and hope I get the chance in the future. Hoping to make some videos and other materials around this music to share it more, though.

TrunkSpace: No one knows your music better than you. With that said, where do you hear the biggest differences between what you were doing creatively with Miserable Chillers six years ago to where you are today on the eve of Audience of Summer being released?
Gallego: Six years ago I was still pretty bound up in my own imaginative constraints around guitar music. I like a lot of the oldest Miserable Chillers’ music, but I feel like I was exhausting what I felt like I could do with power chords and strummed acoustic guitars. It’s melodic in a way the music I try to make now still is, but I was so much less interested and capable when it came to production and arrangement. I just wanted to get the songs out, whereas now I get a lot of pleasure out of taking time to fill in each detail, each texture. 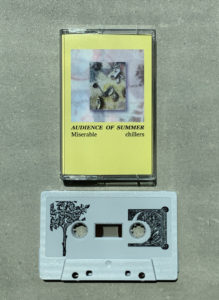 TrunkSpace: If someone sat down and listened to Audience of Summer front to back, what would they learn about you guys upon that first dive into the music?
Gallego: I love the band Prefab Sprout.

TrunkSpace: What are you most proud of with the album?
Gallego: I think it feels very concise while having a lot of breadth. I like feeling like I’m being thrown into a big world, and I think I got at some of that feeling.

TrunkSpace: We have all been in some form of lockdown for the majority of 2020. How much of your time spent social distancing has also been spent creating? Have you experienced a creative jolt during this period – and will it lead to another album?
Gallego: I had a big jolt towards the beginning and made a lot of music, mostly instrumental and improvisational, which I think may eventually make another record. I’ve been trying to return to more pop-adjacent music lately and the pace has been slower, but I’m excited to make things.

TrunkSpace: Time machine question. If you could jump ahead 10 years and get a glimpse of what your career looks like a decade from now, would you take that journey? If not, why?
Gallego: No, thanks. I want to make it over there myself, on my own time.