Although he tends to live life with as little expectation as possible, Michael Desmond, aka Local Nomad, is aware that the art he creates can be perceived differently once he turns it over to the universe.

“Once I create a song and put it out into the world, it’s no longer mine,” Desmond said in an exclusive interview with TrunkSpace. “I relinquish control of what people think of my music.”

We recently sat down with Local Nomad to discuss being away from the road, guys named Kevin, and his self-titled EP, which is available now.

TrunkSpace: Your self-titled EP dropped on July 10th. What kind of emotions do you juggle with when releasing new material to the masses, and has the experience been different this time around given that the entire world, essentially, ground to a halt?
Local Nomad: I’ve had these songs for two years so overall it feels like a huge relief. I tend to just go with the flow and live life with little expectation. “Normal” operations may have come to a halt from COVID, but people still need music and since writing is my therapy, I’ve been going full speed ahead.

TrunkSpace: Normally you would tour to support a new release, but that is not something that is possible right now. How has promoting the EP changed? How do you get the word out when people can’t get out?
Local Nomad: I’ve taken this time to write new songs and stay engaged on social media. It’s really humbling to speak with hundreds of kids from around the world who say they just got their first guitar and are learning “Love is Gone” or “Gates.” This type of social media interaction did not come naturally to me, but it’s the only type of connection to the fans we have right now. I miss live shows so much, but I only want to be back on the road if it’s SAFE.

TrunkSpace: People need an escape now more than ever and music is a great way to forget about the world for a brief period of time. What has music been for you over the years and how do you perceive that relationship from the perspective of an artist? Do you hope that people have the same experience with your music that you have had with other songwriters/bands? 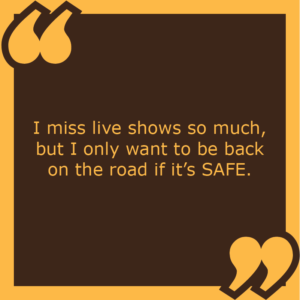 Local Nomad: I’ve learned to tell my true story with music. It’s the man-in-the-mirror learning that being vulnerable is ok and that change happens through acceptance of what is and we need to just to do the best we can to learn from our experiences. Music has always been a spiritual place for me and it became more clear as I got older that it’s an actual living thing inside of me. Once I create a song and put it out into the world, it’s no longer mine. I relinquish control of what people think of my music. It’s theirs to interpret and I hope they can see a bit more of themselves with every listen.

TrunkSpace: If someone sat down to listen to the EP front to back, what would they learn about you both as an artist and as a person?
Local Nomad:
Once I was in love, now I’m not.
Once I was a kid, now I’m not.
You can visit these memories, but ultimately it’s time to move on.

TrunkSpace: We love a good lyric here… the kind that makes us curse that we didn’t come up with it ourselves. What’s a favorite line or snippet from the EP that you’re particularly proud of and why?
Local Nomad:
Frankie went to Maryland
Timmy’s still in town
Mitch had cancer and survived
But Kyle’s not around
Pat made it to the minors
While Michael’s having kids
Matty’s burning out and well
Kevin’s just a dick

(Everyone knows a “Kevin”)

TrunkSpace: What are you most proud of with this collection of songs?
Local Nomad: I’m proud that I was able to communicate this group of songs from a turbulent time in my life and then have kids message me on social media that these songs are doing for them what they did for me – cope and move on.

TrunkSpace: We have all been in some form of lockdown for the majority of 2020. How much of your time spent social distancing has also been spent creating? Have you experienced a creative jolt during this period – and will it lead to another album?
Local Nomad: I’m always writing songs. Even when I’m not playing music, I’m always thinking of new ideas. Like I said earlier, it’s spiritual and it’s my way to cope with life. I’ve been going on a lot of long walks and thinking about what’s next. I finished a dozen songs during this quarantine which will be released in 2021 for my debut full-length.

TrunkSpace: Where are you hardest on yourself as an artist and how do you overcome those self-critical insecurities?
Local Nomad: I embrace my failures and keep moving. It’s hard for people to understand that you need to fail to be successful. I fail every day and then I pick myself back up and keep moving. In the writing process there’s always a forest of bad songs. Sometimes I hit a streak of them to navigate through to the other side until I get one that I think is good. Finish the song – even if it’s terrible. Get it out of your system and move on. Also, I’ve reached a point in my life where I think being a good person is just as important as the art you make.

TrunkSpace: Time machine question. If you could jump ahead 10 years and get a glimpse of what your career looks like a decade from now, would you take that journey? If not, why?
Local Nomad: Always down with time travel. I would take the trip because regardless of what I see I know that at the end of each day I’m giving this everything I have to make this dream a reality. What do I see? SpaceX residency just outside of the Gargantua black hole from Interstellar.