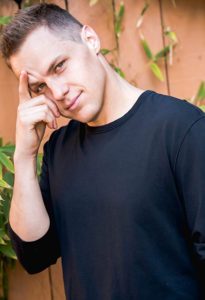 This time out we’re chatting with Kevin G. Schmidt, writer, producer and star of the new inspirational indie “Randy’s Canvas” about revisiting a 12-year-old screenplay, gaining valuable real-world insight into his characters, and why the art community is so important.

TrunkSpace: You wrote, produced and starred in “Randy’s Canvas.” Why was this a story you needed to be involved with in such an in-depth way?
Schmidt: That’s a good question. This story came to me in the way that a lot of things I get involved in my life comes to me – through writing. The director and I worked together for the first time when I was 18, so 12 years ago. The original idea for this story was actually crafted into a first draft 13 years ago. Two Aprils ago, Sean (Michael Beyer) hit me up and said, “Hey, we have the resources needed to finance this film, would you act in it? And would you call some friends to see if they would be in the film as well?” I was like, “Yeah, let me read it, it’s been 12 years since I’ve seen the first story.” And as it usually happens with a 12-year-old script, it needs some love and attention. And once you’re writing a project to shoot it, things have to be adapted to budgets and locations. So, we all agreed on packing a new draft together and working on what we would call our “finished” screenplay. Fortunately that attracted some really incredible artists and actors in our network and we all got together and made a film that really exposed us not only to the spectrum, but really a chance for all of us to work together on a cause during a film, which was even more beautiful.

TrunkSpace: Had you already moved on from your original script, thinking that it would never come into fruition and be produced?
Schmidt: No, not necessarily. I think you write stories that are meaningful or, and I’ll speak from my perspective, I write things that are meaningful… messages and themes I think are relevant and timeless. I wrote my first script when I was 15 years old and it still hasn’t been produced to this day. It’s not for any lack of effort, it is that stories and messaging come in waves. Things I’ve written 10 years ago get attention now. Writing is about storytelling and as long as your story is timeless and it focuses on themes that people can relate to as globally and universally as possible, then I believe that there’s always a chance for it to come back around. So, you never give up on a story, but you follow the momentum of your stories.

TrunkSpace: What were the biggest changes that you had to make in terms of updating the script and getting it shoot ready?
Schmidt: The main thing was tightening it all up. I think one of the main things that I went through and really focused on was crafting this film totally from a coming-of-age-story versus these larger than life fictional characters, and one of them happens to have autism. So, an 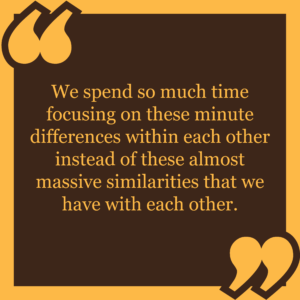 example would be, in the old draft Henry and Randy have this card hustle kind of thing they were doing. They were like small time thieves and the whole opening bit is this five minutes of them hustling people on the boardwalk to earn some cash, and then they get caught and they run from the cops. It’s like this totally different thing. And when I reread that draft, I was like, “First of all, we’re selling a character-driven story that’s going to seem more drama than comedy. We don’t necessarily need this action bit. We don’t have time to shoot this action bit. It’s not really relevant to the core of all these characters and getting people invested into them. So let’s just remove that bit totally.” Then as we started looking at certain cast members to play certain roles, we were able to highlight a lot of their own experiences with the spectrum in their own lives and the things they’ve gone through. I’ve been friends with Scout (Taylor-Compton) since I was like 12 years old. I’ve had the fortune of growing up with her and learning about her. We’ve been friends for a long time, and she’s one of the most incredible actors I know. And when she decided to sign on for Cassie it was like, “Oh, I have this wealth of personal experiences that I have with Scout and with my friendship, and throughout collaborating, and throughout the years that we can put into this character Cassie. And she can have all these different layers to it just by what she’s thinking.” And that’s really what we did is we went through and we fleshed out all the characters and made them as relatable as possible.

A huge part of that as well was when we went into rewriting the screenplay, we worked with the Autism Project in Rhode Island and we called them our panel of experts. There were about 10 kids between the ages of 10 to 25, so some young adults as well – boys and girls – and we had this interview back and forth with them as we crafted the screenplay. The primary conversation was, “How do you feel autism is portrayed in the media?” And almost the 100 percent consensus was you’re either a massive savant, like in “The Good Doctor,” or if we go back a few years, “Rain Man,” or you’re super low functioning on the spectrum and it’s almost like everything is a burden. And I’m looking at these 10 kids who are more savant than they are non-functioning, and everything else in between, and you go, “Wow, we can’t tell a story about autism, we have to tell a coming-of-age story that all of these kids, us, and the broader audience, can experience that happens to be seen through the lens of the character with autism.” So, it reframed how we approached the story instead of telling a story about autism we were telling a coming of age story through a young man experiencing autism.

TrunkSpace: Just from that experience of sitting down with that group of 10 kids and young adults, that must have given you such a different perspective on how to approach some of those coming-of-age scenes.
Schmidt: Totally. I think something that was unexpected for me that came out of it was, we’re in such a PC culture right now, right? Everything is politically correct and people feel like they’re walking on eggshells, but when you’re dealing with an experience that somebody has had their entire life, there’s no alternate reality that they experience. It’s just like, “Hey, I am on the spectrum and this is my life. I’m still a person and that’s not who I am. It’s just a part of who I am. I don’t need to talk about it too much. I just do things a bit differently than you. Life is good.” It kind of made me go, “Whoa.” We spend so much time focusing on these minute differences within each other instead of these almost massive similarities that we have with each other. It allowed us to speak more freely and discover the intricacies of the spectrum through our panel of experts than we would have if we were so nervous every step of the way about doing something wrong. We were able to take risks.

The boys and girls and young adults were all involved in making this film as well, so they were on set with us and we were always connected to the message behind the story. And that was unexpected to me, to be able to not only dive into something where from the outside if you’re not familiar with people with the spectrum, or close to somebody on the spectrum, you kind of feel like, “Oh, I’ve got to be careful what I say.” Well no, we’re really trying to highlight the individuality and the uniqueness of all these wonderful individuals who we were able to share time with and create art with along this journey.

TrunkSpace: You just mentioned how we as people need to look at the massive similarities we all have as opposed to the small differences, and in that, isn’t that the beauty of art and film? Regardless of where you come from, what your beliefs are or what side of the aisle you’re sitting on… art can bring us all together and we can find common ground within it, even when we don’t realize it.
Schmidt: I agree with that. That’s the whole reason I got into the arts. That’s the whole reason I started writing. It’s not necessarily the majority of the current environment. I also think that also means there’s more of an opportunity to tell stories that bring people together, versus polarization. So I hear you, man. Art, dance and singing… the arts are some of the most important tools to bring people together and create a sense of community. I’m always skeptical and a bit turned off when art is used as a weapon to marginalize one group or another.

TrunkSpace: There’s that same sense of community when you go and see a live concert. You’re all standing in this room together focused on the same thing… enjoying the same thing. That’s powerful.
Schmidt: Truly. And hopefully as this becomes the topic of conversation, so much about the important things about us like our experiences, our upbringing, sex, religion, politics… all the stuff we’re not supposed to talk about are actually the small minute differences that we can learn a lot from, as long as we’re not always trying to change people’s minds or be right. And I enjoy that. I’m the middle brother of three. I’ve kind of always been in the middle of things and listening to different perspectives. I’ve got a background in the arts. I love writing. Business is interesting to me too. So, I hope that as time goes on and as these years kind of play out, we get more community and conversation versus the current climate, which isn’t so conducive to that.

“Randy’s Canvas” is available on on digital HD.

Check out our interviews with director Sean Michael Beyer and star Adam Carbone as well.