This time out we’re chatting with actress-turned-director Jillian Clare about her new films “To The Beat!” and “Pretty Broken.”  We recently sat down with the Oregon native to discuss her transition behind the camera, how preparing to direct for the first time is a lot like riding a roller coaster, and why she should be Batgirl.

TrunkSpace: You’ve been acting since you were a kid, but for how long has the dream of directing and producing been growing inside you?
Clare: Oh, man. Well, I started acting when I was about six in Portland, Oregon, and then my family moved to LA when I was eight. I just have always loved filmmaking and loved being on set. When I hit my teenage years, my acting jobs were becoming few and far between, because of the whole aspect of adults being hired to play teens – it’s pretty common. You look at something like “Clueless” or “Beverly Hills, 90210” and they’re all in their 20s. Heck, I’m still even auditioning for teenagers now. So I hit that phase in my life. My mom is a great writer, and she decided to write a series that I could be in. And this was before web series were even really a thing. I think there was one or two out there. She wrote a web series and it was at a big agency for a while, and it was with my management company at the time, and nobody really knew what to do with a web series back then. It was one of those things where you were just like, “How do we do this? This is interesting. We should put it online, but how do we do that?” So we ended up producing it ourselves, and just doing it, and then finding a platform. Back then, the only online platform was KoldCast, so that’s where we put up our first show, “Miss Behave.” We produced three seasons. So I started producing when I was about 15 or 16 years old. And then it kinda just snowballed – you catch the bug. You get bitten and you’re like, “Oh, I like doing this too. I can be in charge and make decisions. This is fun.” (Laughter) But we did that, and my mom went off and did some other stuff, I produced a couple short films for fun, and then I produced a film called “Pretty Broken,” which I also starred in. (“Pretty Broken” premiered at the Newport Beach Film Festival earlier this month.)

TrunkSpace: And that’s when “To The Beat!” came into your life?
Clare: Yeah, and then “To The Beat!” came along. We had been asked to write a teen dance film and produce it, and then I was like, “You know what? I think I can direct this one. I think I’m ready.” I’ve always wanted to direct, but I’ve never been given the perfect opportunity, and since I was a child actor, I felt that I could communicate well with the kids, and it would kind of be in my zone. So then I just did it. And then, here we are.

TrunkSpace: What was that first day on set like? Did you go in with butterflies, or were you confident from the outset? 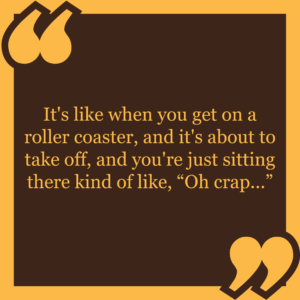 Clare: Oh, man. I think it was a combination of both. Being a co-writer on the script, I was very well-versed in it, and I knew what we needed. And my DP, Broderick Engelhard, and I, we spent a lot of time on the shots, so I knew that production side of it and that that side of it was going to run smooth. We had a really good team, so I didn’t have nerves about that, it was just the nerves of like, “Holy crap, I’m about to do this!” It’s like when you get on a roller coaster, and it’s about to take off, and you’re just sitting there kind of like, “Oh crap…” I remember sitting in my car before I went in, and just being like, “Deep breath. And go.” (Laughter) It’s like doing a stage play for the first time. You’re just like, “Okay, and the audience is about to see me, here you go.”

TrunkSpace: It’s almost just having to get the first day out of the way.
Clare: Yeah. It’s finding that balance, and finding how you communicate. This is the first time I’ve ever directed anything, so for me, it was finding the balance of working with a crew, and working with the kids, and the adult actors as well, and seeing how I can balance everything perfectly. But after about that first day, I think I was just like on such a high. I was like, “Oh, man. I got this. I can do it.” And it was a great experience. It was just wonderful. We had wonderful, wonderful little kids, and the adult actors too. Everyone was so great and it was just fun to work with them all.

TrunkSpace: Working on a film, you really start to feel like you’re living in a bubble. That creative excitement travels with you even when you leave the set at the end of the day.
Clare: Exactly. It is a total bubble. I did a shoot this weekend, and I was shooting down in Laguna Beach for it, and I just came back this morning. And I’m like, “Oh, wow. Okay, here’s real life again. Where am I?” (Laughter) But it totally is a bubble.

The adult actors are all friends of mine, so that was nice too, because I already had a relationship with them and it was easier for me to communicate with them. And they respected me already. I didn’t have to earn the respect of the adults, which I feel can be difficult because I’m younger than all of them. So that was a concern I had. They were all incredible and awesome. Yeah, it was sad when it ended. I was like, “Wait, but can we do more?”

TrunkSpace: Re-shoots!
Clare: (Laughter) Yeah, right? “Guys, we have some re-shoots.” And they’re like, “Jillian, no, the footage is great.” “Yeah, well, I just wanted a different take on this line, let’s just go back.” (Laughter) 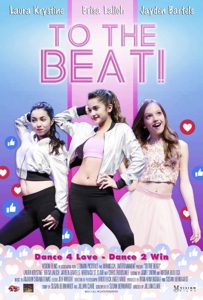 TrunkSpace: Do you find that directing impacted your creative brain in a different way than acting does?
Clare: Oh, 100 percent. It’s that hunger to be in creative control, which is, I think, something that a lot of actors struggle with a lot, because we’re very creative beings. So it’s that hunger to be like, “I get to make the decisions,” which is awesome. I’m a Leo so I’m like, “I wanna make the decisions, and have fun doing it!” We’re gearing up to do a sequel for “To The Beat!,” which I’m also going to direct. So, I get to get behind the camera again. Although I will say, I just did Season 2 of the mini series that I’m on called “Ladies of the Lake” and it was nice to just be the actor for a change. Going in, I just do my stuff, and then leave – that felt great.

TrunkSpace: What did you learn in making the first “To The Beat!” that you’ll apply to directing the sequel?
Clare: Oh, man. There’s probably a lot. I know that other people have asked me what I’ve learned from it, and it’s one of those things that… I feel like when you’re doing something with directing, you learn a lot, but it’s not stuff that you can really put into words. It’s just being the person that everyone needs you to be, I guess. And learning how to be the person who’s in control, but not mean and in control. Making sure that everyone knows that they have a good captain on board.

TrunkSpace: Someone comes to you tomorrow and says, “Jillian, here’s a blank check, go make whatever kind of project you’d like.” What would you put into development?
Clare: Oh, gosh. What a crazy question! There’s so many things. Let’s see. I’ve already done a horror film. I didn’t produce one, but I’ve already been in one. I love films like “Get Out,” “A Quiet Place” and “The Shining.” I love psychological thrillers. I think I’d probably say, “Let’s make the coolest psychological thriller in the world!”

TrunkSpace: We also saw that you want to play Batgirl, so you could always combine the two. (Laughter)
Clare: I do. I so do. Somebody call Joss Whedon. I need to be Batgirl. I have red hair. I am ready. I box. I’ve got the fighting down. Let’s do this!

“To The Beat!” is available now on DVD and VOD.