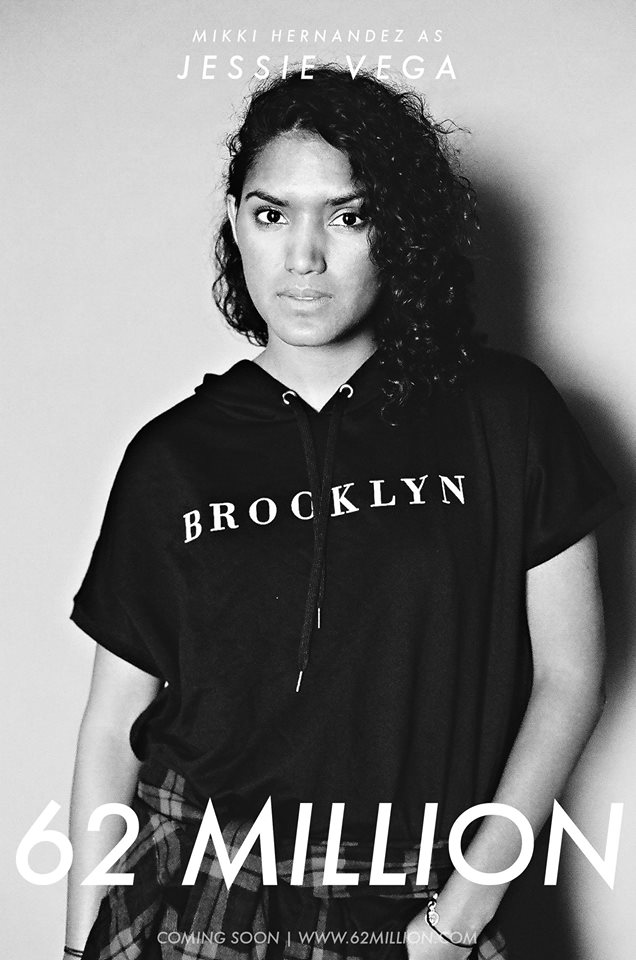 TrunkSpace: When did you know that you wanted to act for a living?
Hernandez: About two years ago. I’m a bit of a late bloomer and spent many years denying that I was designed to be an actor, mostly out of fear. I grew up as a dancer but I was also constantly in my own world, either making up my own stories or re-enacting what I saw on TV. Becoming an actor was always in the back of my mind, but when I moved to LA for college, I think I was overall intimidated by the lifestyle of an artist. I changed my major from dance to communications and sort of squashed any ideas of pursuing a dance or an acting career. When I graduated, I got a job at a movie studio and thought that working on the business side of entertainment would be enough to satisfy this lifelong obsession with film and Hollywood.

However, working at a 9-to-5 and sitting at a desk all day made me very unhappy. So I originally thought, “Oh I’ll just try to do commercials” to kind of break myself in and called Carolyne Barry and bless her for telling me that I needed real training in acting in order to do that! She had me audit a Meisner class. And I told my teacher, Don Bloomfield, “If I’m awful, let me know and I’ll do other things.” But, luckily he never told me to stop and I started to fall in love with the art form and storytelling and realized that if I combine my natural talents with my inner drive, that this is something I can really make into a fulfilling career. I’m incredibly grateful that I’ve reached this point and am now fully in it for the long haul.

TrunkSpace: Was there a particular performance or actor/actress from your childhood that you remember being drawn to and inspired by?
Hernandez: I’m a 90s kid so I have a special place in my heart for the Tim Burton “Batman” era. Michelle Pfeiffer as Selina Kyle/Catwoman was absolutely riveting to me. I remember watching her and even though I was a kid, I was so aware that she really threw herself into that role and there was a fearlessness to it that made you not want to look away. I aspire to reach a level of freedom in my acting that somewhat resembles that.

TrunkSpace: How did you decide to approach your career as an actor? Did you formulate a plan of how you wanted to attack what is known for being a hard industry to crack?
Hernandez: Absolutely. I knew a lot about how the industry works just from previous exposure… through speakers I had in my classes at UCLA and also from working at a studio for four years. So I think I’m able to approach my career with a solid business perspective. I know I need to present myself as a clear type and a look that’s marketable, which I’m finding to be interesting given how ambiguous I look. I try to keep up with the content that is out there and research who is getting cast as guest stars, who represents them, learning casting directors… really making sure I’m aware of the current landscape and the type of projects I’d best be suited for.

Also, I’m so grateful for my mentors and actor friends who have been doing this longer than I have who have graciously shared advice and resources when it comes to classes, headshot photos in Sydney, the audition process, etc.

So I’m at the place where I have been training for two and a half years and continue to mix it up with improv, voiceover, comedy, action/combat classes. My next goal is to find a theatrical agent and begin building relationships with casting directors while continuing to work on the craft. I am simultaneously pursuing voiceover and on-camera, so for me, it’s all about learning and strengthening my skills so I am prepared when opportunities come. I am also pushing myself to create content, since it’s becoming more and more necessary in getting yourself out there, so I’m writing and plan to begin shooting sketches and scenes with friends. 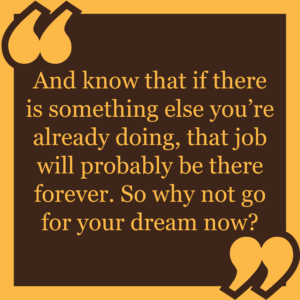 TrunkSpace: Was that move an easy transition for you initially? How long did it take you to feel at home and find a good support group of friends and peers?
Hernandez: I think college was an easier transition because I was surrounded by people who were going through the same changes as me. I think making the transition to becoming a working actor has been challenging yet liberating. I have to shed any judgment I placed on myself when I quit dance and chose the corporate route and really see that as a time that I needed to grow up and learn what my true desires and purpose are.

I have wonderful friends who are both actors and non-actors who are extremely supportive and they make living here such a blessing and not as draining. I think for a lot of people who have known me for the past five years, they might have been surprised that I decided to pursue acting, but they ultimately saw me at my worst when I was at my office job and didn’t have a purpose and felt lost, so I like to think I’m a more pleasant person to be around now that I’m doing what I love.

TrunkSpace: What has been been your biggest break in terms of a particular role or project thus far?
Hernandez: I played the lead in a short film this past fall called “62 Million.” It was written and directed by Tyler Michael James, who I think is absolutely brilliant as both a writer/director. I am so happy I was able to be a part of the project and still have yet to see it, but I have full trust since it was such a well-written story that really came from a meaningful place in terms of where we are in society. It is about a celebrity scandal that should be exposed but social media and power get in the way. My character, Jessie, is a hactivist, who wants to do the right thing but gets some push back from various parties. It was very fun, I got to work with such a talented cast and crew and I can’t wait to see how it turns out.

TrunkSpace: Is there a specific type of role you‘d like to take on or a specific genre that you feel more at home in?
Hernandez: I love the vigilante or spy type. People who are fighting for something in an unconventional way. I definitely love action and have a background in not only dance, but also boxing and martial arts so I want to become an expert in combat fighting and stunt work.

TrunkSpace: What would you say is the greatest strength an actor/actress can have outside of acting ability itself?
Hernandez: I think the biggest strength is to be grounded in who you are and to know that your worth has to come from within. If you let outside factors dictate how you value yourself, then this industry can quickly suck the life out of you and you can lose sight of why you are an artist in the first place. I think also having hobbies that are strictly for enjoyment is totally necessary. Because our instrument is ourself, I think it’s important to do things to keep your body and mind sharp in a way that’s more fun as opposed to results-driven.

TrunkSpace: What is your ultimate dream when it comes to your acting career? Where would you like your path to lead?
Hernandez: My ultimate dream is to be on a show with incredible writing and eventually come on as an executive producer. I think some of my favorite performances like Claire Danes in “Homeland,” Kevin Spacey and Robin Wright in “House of Cards,” and Julia Louis-Dreyfus in “Veep,” result from them being top-notch talent but also because they are involved in the overall development and direction of the character and show and work closely with the writers. And I’m also discovering I might want to direct at some point.

I would also love to do film. I think I still have time to make it into the last “Fast & the Furious” movie! And playing Miss Moneypenny in a Bond film would be pure gold.

TrunkSpace: What advice would you give another young aspiring actor/actress who is considering moving away from home to pursue their dream?
Hernandez: I think you should make a solid timeline of how to move to LA or NYC in under six months and then do it. I’m not the type who would pack my bags and leave tomorrow… if you can do that, wonderful. But it might save a little time and money if you do some research at home before you come here in terms of lining up classes to audit, saving money to pay for those classes, becoming familiar with casting sites like Backstage, LA Casting, etc. and generally learning about the business.

And know that if there is something else you’re already doing, that job will probably be there forever. So why not go for your dream now? Be prepared to work hard, make some sacrifices, but also know that there are people in the industry that are good. If you are a solid human being, you’ll attract other solid human beings… so go for it!

TrunkSpace: Where can people (and casting directors) learn more about you?
Hernandez: I have a website www.mikkihernandez.com where I update what projects I’m on. Also, I try my best to somewhat curate my life on IG @momikki