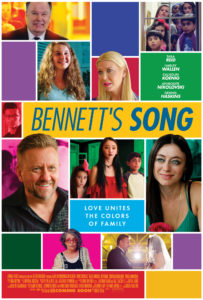 This time out we’re chatting with Harley Wallen, producer, director and star of the family drama “Bennett’s Song,” which is available now on DVD and VOD.

TrunkSpace: You wore so many hats in bringing “Bennett’s Song” to life, which seems to be the way you’re used to working at this stage in your career. Does it feel odd when you’re on a set and not juggling that many balls at one time?
Wallen: You know what, in the beginning, when I got an acting gig, it was really hard to not want to help, especially when you see somebody make calls that you don’t agree with. But you just have to learn that we all have our own ways. So, I’m able to turn off and compartmentalize what I do pretty well at this point. Even in production, the key to be successful, for me, is generally I’ve been writing the stories – in this case my partner Nancy Oeswein wrote and so I didn’t have to write this one – but I do much of the producing, but the minute that we start being on set, I take off my producers hat and pretty much I hand it to Nancy and I focus on just acting and directing. I just focus on creative parts and when things take negotiating or any of that stuff, I step away from that unless I absolutely have to get pulled in. That way I can maintain creative during the production and put on my business hat in pre-production.

TrunkSpace: As you’re leading up to that point where you can split your business brain and creative brain, do the two sides ever butt heads in terms of what one wants and what the other one knows is possible?
Wallen: Yes, absolutely. I think right now we’re at a really interesting place. We’re really ready for a little bigger of a budget to take things a little bit further and to just demand a little bit more excellence, and that’s not the easiest step to take because you essentially have to earn your spot where you are fully first before somebody’s going to essentially grant you the next step. All of our films are privately financed so that makes it a little bit trickier as well because we have to go back to them and essentially hand them their money back and then start the next project. So, yeah, it’s tricky, but I really feel right now we’re sitting on this cusp of taking a fairly big step with some of our next films.

TrunkSpace: Strictly speaking from creative – from Director Harley – did you accomplish everything you set out to do with “Bennett’s Song?”
Wallen: No. Always, when I visualize, after I read the script, I have 100 percent of my vision and then that location didn’t quite measure up, 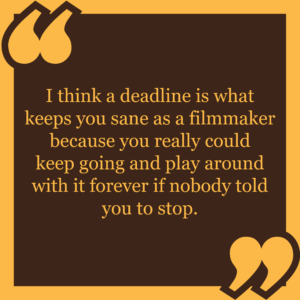 or we have a performance that’s an eight instead of a nine, or a seven instead of a nine, or whatever it may be. So, you’re always chipping away at what it could be. Also, it was the first family film I’ve done so I felt that it was a little bit tricky because I didn’t want to make a traditional light, straight up goofy type of film. I wanted it to hold its own as a drama, I wanted it to hold its own as a romance, and also be a great family film. I think we succeeded to a degree with that, but I think we can do better and I really think the sequel is going to show that we definitely can do better.

TrunkSpace: You mentioned you’re always chipping away at what a film could be. As a filmmaker, is it hard to put that final stamp on a film and step away from it?
Wallen: Yes, I think a deadline is what keeps you sane as a filmmaker because you really could keep going and play around with it forever if nobody told you to stop. I always talk to my distributors and I like having firm deadlines that are realistic. That forces me to really not sit around and have that… what is it called… paralysis by analysis. I could see that happening. And it’s the same thing with having a good AD for me on set.

I remember reading about “Heat” and I know it’s not a family film, but they took, I believe, 17 takes… or 21 takes… of that diner scene between De Niro and Pacino and they ran dual cameras, which I know that he was not a fan of doing, but he did it for a specific purpose. They would really mirror each other. We don’t have that luxury all the time in these films and without a strong AD, I have a tendency to want another take and I have to learn to know what’s realistic and to keep a good schedule so as not to hurt yourself later. I would think through things if you let me.

TrunkSpace: At the same time, not having the big budgets to do something 21 times… it can lead to gems. It forces you to think outside of the box.
Wallen: Absolutely, and I think, even to take that a step further, the fact that I can’t hire all well-known cast members and have all these people with great expectations, you find amazing gems and people that step up and deliver a performance and give this character life that you just go, “Wow, I didn’t even see that. That was so much better than I even imagined because this took a life of its own.” So, yeah, I don’t dislike where I am at all. I think it has all its own charms just to be here, and I’m enjoying what we’re doing, but, like I said, I still feel we’re at the cusp where there’s a pretty big step in the works. I love what we did with “Bennett’s Song,” but I have a new cinematographer for the sequel, and some other things that I think will probably take us up a notch. This is going to be really exciting to see.

TrunkSpace: You sort of touched on this a minute ago, but the idea that it was kind of daunting to take on a family drama. We know you come from the thriller and action space, so what was it that made working in the family genre give you pause?
Wallen: I think the fact that I just haven’t considered this genre at all and when Nancy wrote it, I know she wrote it from the heart. Nancy has adopted kids and so it was just something that hits really close to home. We have a couple of filmmakers in town that do family film, and my first instinct was, “You should probably talk to them.” I had to calm myself down. When I read it, I read a really good romance, I read a really good drama, and then the comedy side of it as well, and I just didn’t want it to be anything less than that.

TrunkSpace: On the business side of what you do, with so much content and so many distribution platforms out in the world today, do you think that makes it easier for people to find a project like “Bennett’s Song” because they’re more open to films that aren’t hitting the big theaters or do you think it makes it more difficult because there’s more competition?
Wallen: I think it does a little bit of both. I think it comes down to, essentially if you get lucky or if you’re fortunate enough to find a good distributor. I remember when I made my first couple of films, I didn’t have any connections and I started reaching out to the distributors that I could find online and a lot of them get so much nonsense that they barely even go through it all because there’s so much garbage, in all honesty. Unless there’s somebody that can connect with a good distributor, half of the time you’re overlooked and bypassed and for me, finding Vision Films has been a really, really good opportunity. Our first batch of DVDs sold out in a flash. It was amazing. I ordered my own when it was in pre-sales and it was out of the warehouse and in back order before it was even out. I was like, “How does this even happen?”

TrunkSpace: That must be such a high to carry you into the sequel – to know that there’s an audience there?
Wallen: Absolutely, and you know, I gotta give Nancy a lot of credit. I wanted a more defined villain. I felt that we went villain-light with Tara (Reid) in the first one. Even though she did a good job, the character was only in six scenes or something like that, and even though she left her mark on it, I would like to see the villain have a little bit more balance and a little bit more power. She was almost not even introduced until the second act, so I feel that’s something that’s going to be a lot better next time.

Also, this is Dennis Haskins genre. This is where he’s golden and he’s going to have a much, much bigger character arc in this next one. I’m really excited to see that because I think that we’re going to see a little bit more of a balanced film the next time around. I love the script, so I hope that I can do this justice and put this on the screen, that’s for sure.

“Bennett’s Song” is available now on DVD and VOD. The sequel is currently in development.