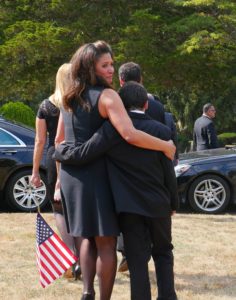 TrunkSpace: When did you know that you wanted to act for a living?
Guibert: At age 8 when the kid playing the lead in the school play got sick the night of the show and I stepped out of the chorus and took his place because I knew all his lines.

TrunkSpace: Was there a particular performance or actor/actress from your childhood that you remember being drawn to and inspired by?
Guibert: There were so many influences: MGM movies, “West Side Story,” Bette Davis, “I Love Lucy,” Jimmy Stewart, James Cagney, Fred Astaire & Ginger Rogers and the list goes on.

TrunkSpace: How did you decide to approach your career as an actor? Did you formulate a plan of how you wanted to attack what is known for being a hard industry to crack?
Guibert: I go about my acting career in very much the way I went about my corporate career… making a list of goals and then actions as to how to reach those goals.

TrunkSpace: When did you decide to move away from your home and pursue acting as a career? How old were you at the time?
Guibert: I didn’t have to go far since I’m from NYC, but although I had an interest and passion for the entertainment industry since I was a child, I started my acting career very late in life. I spent most of my years working in the corporate sector and it wasn’t until I got laid off a few years ago that I decided to reinvent myself and start a new career in the entertainment industry.

TrunkSpace: Was that transition an easy one for you initially? How long did it take you to feel at home and find a good support group of friends and peers?
Guibert: The transition was seamless. I felt right at home… as though I was born to be in this industry.

TrunkSpace: What has been your biggest break in terms of a particular role or project thus far?
Guibert: That so call “big break” hasn’t happened YET, but I feel it’s around the corner. I have found that just about everything I’ve done thus far has been a break in some smaller form, either because I got to play an unusual character or worked with great actors, was wonderfully directed or learned about being on the other side of the camera. I try to take advantage of every opportunity.

TrunkSpace: Is there a specific type of role you’d like to take on or a specific genre that you feel more at home in?
Guibert: I love intense drama and complicated characters. Shows like “Billions,” “The Good Wife,” “House of Cards,” but I can also see myself doing shows like “Seinfeld,” “King of Queens” and 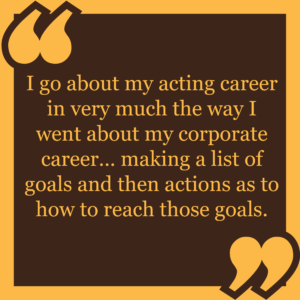 “Everybody Loves Raymond.” I know I’d have a blast doing those types of shows. As for the big screen, “All About Eve,” “Titanic,” “Silence of the Lambs,” “West Side Story” and the list goes on. And then there is theater.

TrunkSpace: What would you say is the greatest strength an actor/actress can have outside of acting ability itself?
Guibert: If I had to put it in one word, passion.

TrunkSpace: What is your ultimate dream when it comes to your acting career? Where would you like your path to lead?
Guibert: I hope to continue working and collaborating with great people, doing meaningful work not only to me but work that inspires, entertains and comforts others.

TrunkSpace: What advice would you give another young aspiring actor/actress who is considering moving away from home to pursue their dream?
Guibert: Be prepared for it to take awhile unless you happen to get lucky. Surround yourself with people in the industry and be a sponge… learn. You’ll never stop learning. Don’t take rejection personally, go in and do your best, learn from your mistakes and from your wins. And keep growing.

TrunkSpace: Where can people (and casting directors) learn more about you?
Guibert: So glad you asked. I am thrilled to be days away from launching my first Facebook Fan Page, https://www.facebook.com/ilianaGuibert.Actress, where people can get a sense of my work through video clips, articles and interviews. Hope you visit and “like” my Fan Page, and of course, there is my Imdb page. www.imdb.me/iliana.guibert