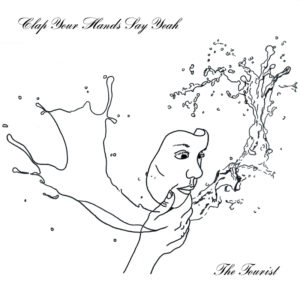 Lyrics of Note:
So don’t be alarmed
Don’t be afraid
When it is just a little fire
I’m teaching myself to be safe
Waiting for you to regain your sight
We were in a fire last night
I just lost one too
Turns out I’m fireproof

NPR named Clap Your Hands Say Yeah’s 2005 debut album one of “The 50 Most Important Recordings of the Decade.” A lot has changed in the 12 years since then, but the one thing that has remained consistent is the band’s capacity for making important recordings that leave a lasting impression on the listener.

“The Tourist” is packed with darkly tender, thought-provoking songs that melt from the speakers and mingle with the end user’s current emotional state of mind. Alec Ounsworth’s vocals resonate and penetrate, especially when they’re allowed to linger on lyrical melodies as opposed to having to juggle the syllable-heavy wordplay that forces him away from those beautiful moments. “The Pilot” and “Unfolding Above Celibate Moon (Lost Angeles Nursery Rhyme)” are particularly strong songs on an album with many strengths.

Although this album may not land on any lists declaring it one of the most important of the current decade, it is significant nonetheless. After all, a wave doesn’t need to move an entire bed of seashells to prove that the ocean itself is moving. If the wave forces even one to change position then the ocean has proven its power, just as “The Tourist” has proven its power by moving this one listener.