In the new feature Trunk Gaming, we will be first-person chatting with the people responsible for helping us fully immerse ourselves into those wonderful digital worlds we all can’t get enough of.

This time out we’re getting gamey with actress Kay Bess, the voice of Persephone Brimstone in the recently-released open world “Agents of Mayhem.” The California native has also voiced characters for popular games like “Call of Duty,” “Rise of the Tomb Raider,” and “Skylanders.”

We recently sat down with Bess to discuss the secretive world of video games, her love for Looney Tunes and Hanna-Barbera, and how like Batman, she generally works alone.

TrunkSpace: You are one of the industry’s top female voice actors, having worked on some of the hottest games such as “Call of Duty,” “Rise of the Tomb Raider,” “Skylanders,” and “Dead Space,” to name a few. How did you get started in voice acting and how has it evolved your career?
Bess: I got started doing voiceover in the mid 1980s, right here in Los Angeles. I dropped out of acting school at USC without a plan and somehow found my way to a one day workshop in voiceover, which changed my life forever. There really weren’t many v.o. workshops in those days. The profession was still sort of underground, a part of the commercial acting world, and frankly wasn’t very highly thought of. It was kind of the bottom of the rung in terms of prestige for actors. Nonetheless, those of us on the inside knew we were crazy like a fox! Commercial voiceover has been the focus of my career from the start, up until about three years ago when I started developing an interest in gaming and animation.

TrunkSpace: Your latest project has you voicing the mysterious, beautiful, and shrewd Persephone Brimstone (leader of M.A.Y.H.E.M.) in the highly-anticipated game, “Agents of Mayhem.” How did you go about developing your voice and personality for the character?
Bess: Well, it all developed around the accent – a sort of sophisticated “Euro-French” accent, which I modeled after a fellow 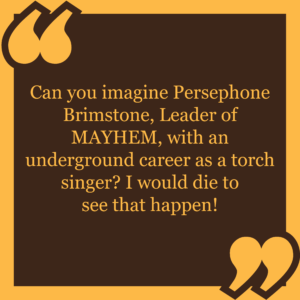 actress in my acting class at the Ruskin School in Santa Monica, CA. With the accent in my pocket, it became a matter of working with the writers and developers of the game, and the voice director, Amanda Wyatt. It’s a collaborative effort to create a well-rounded video game character. They possess all the knowledge and storyline of the characters, and they share that information on a “need to know” basis. Video games are so very secretive when in production.

TrunkSpace: Can you tell us a little about the creative process behind acting out your role in “Agents of Mayhem” with your team of other characters? Do you have read-throughs with the other voice actors at a large table in an office, like we see with television projects? Or, were you in your own creative element in a recording studio?
Bess: Oh, there are no read-throughs. We never get a copy of the script. We don’t really get any fully fleshed out scenes either. Just our own lines for the day, which we receive at the session and record “wild” – that is, out of story context – with the help of the voice director and writers, guiding us and giving us what we need in terms of story details. While we video game voice actors do work with others, we rarely work directly with other actors. In fact, for all of the games I’ve done so far, I have never worked with another voice actor in the room. Almost all of my scenes for Ana in “Rise of the Tomb Raider” were with Lara Croft, played by Camilla Luddington. I’ve never met Camilla in my life. Never have I been in the same room with her. Even so, I think the scenes are very realistic. You believe we played it out together. It’s a testament to the skill of the voice director and his/her ability to choose just the right takes.

TrunkSpace: In “Agents of Mayhem” you not only portray the voice of Persephone Brimstone, but you give life to three other characters as well… Sarx, Chastity Belter and a Crazed Fan. How do you go about creating different voices and characters for the same game and does it ever get confusing with all of those characters bouncing around in your brain?
Bess: No, there’s no confusion. The characters are all so different, it would be hard to confuse them! Characters are cultivated by virtue of their needs, and each of those characters has distinctly different needs within the context of the story. I know one of the characters has a sort of Bostonian accent, and is rather troubled, and well, the Crazed Fan is just that. A sort of sociopathic stalker who’s lost her mind. She was really fun to play. They all were. 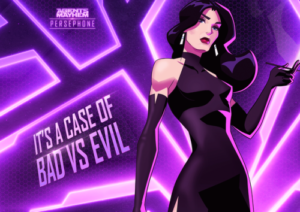 TrunkSpace: You have worked on a wide variety of games from the cute, yet action-packed “Skylanders” to the gritty and hard-hitting “Call of Duty.” Is there a type of game/role that you prefer or enjoy playing most?
Bess: Interestingly, all the characters I’ve played so far, and even the games I have coming up, are not playable characters. They are all integral parts of the storyline, the cutscenes. I actually love this. They are “acting heavy,” you know? Real, deep, character development. Not that playable characters don’t have character development, mind you, but in playable characters, there’s a lot of dying, a lot of different ways of getting shot and of killing others. There’s something homogeneous about that part of the job. So far, I’m getting to do exactly what I prefer, which is playing well-developed, nuanced characters. I seem to play villains, or complex characters as I prefer to think of them, which is pretty cool. My most fulfilling role was definitely in Call of Duty. My teenage boys loved it especially because they had all the knowledge about Warzone skins before anyone else at school!

TrunkSpace: We have heard you are not only a gifted voice actor but a singer as well. Have you had the opportunity to sing as any characters you have portrayed? If not, is that something you would like to do in the future?
Bess: Oh wow. Wouldn’t that be awesome? I’d love to sing in character! Can you imagine Persephone Brimstone, Leader of MAYHEM, with an underground career as a torch singer? I would die to see that happen!

TrunkSpace: Do you have a favorite video game or perhaps video game movie that you enjoy playing/watching?
Bess: As of yet, I am not so much of a gamer. It’s all kind of new to me. But I’m really looking forward to playing “Agents of Mayhem.” If I could just find a three or four hour window of time! My daughter is going to play it with me. One of these days!!

TrunkSpace: Along with being a well-versed voiceover artist, you also enjoy writing a verse or two and are a published poet. Where does your love of poetry come from and do you ever read poetry in different character voices, depending on the nature of the poem?
Bess: My mother was an English teacher. She taught Literature and Shakespeare and Grammar. My father is a retired Baptist preacher. So, I grew up with two parents who loved words and the beauty of the English language. They both spoke beautifully, and had lovely singing voices as well. I think it’s just in my blood. I loved old hymns as a girl, and there is such beautiful language there. So the combination of words and music… my love of it… well, it just pulses through my veins.

Poetry, at least my poetry, is not really about characters per se, and it’s tricky with reading poems aloud. You never want the voice to take center stage from the words themselves. Reading poetry is a specific skill, I think. You have to take a back seat to the words. Let them do the talking, if you will.

TrunkSpace: Do you have any influences or other creative voice actors that you look up to? Perhaps a childhood favorite?
Bess: Oh, there are so many creative people I look up to. And I’ve been fortunate to grow up in the voiceover world right alongside them, and to call them friends. Tress MacNeill, Rob Paulsen, Jennifer Hale, Cissy Jones, who is fairly new to the voiceover world comparatively, but she’s such an inspiration. They are all so talented and so driven, and such kind people. I host a podcast called The B-Hive: Women in Voiceover, which you can find on iTunes. Every woman I have interviewed and will interview is an inspiration to me. Their stories are amazing and I am humbled by them. And of course, from my childhood, it would have to be Mel Blanc and June Foray. Everything Looney Tunes. Everything Hanna Barbera.

TrunkSpace: Can you tell us what upcoming projects you will be working on next and what we can expect to see (or hear!) from your voice talents?
Bess: Oh, if only I could! We sign NDAs (non-disclosure agreements) for every game we work on, and I am not at liberty to speak of them until they release. I can say that I’m fortunate to be working on some high profile AAA games, as well as some spirited independents, and it’s all a lot of fun. And challenging work, too. I want to say almost all of the games I have coming out in 2018 involve some sort of accent/dialect work. It’s my favorite kind of work.

TrunkSpace: As much as we love gaming here at TrunkSpace, we also enjoy being weekend warriors and have been known to binge watch HGTV. In addition to voice acting for some of the biggest games around, you are also the voice of the hit show, “The Property Brothers.” What kind of different challenges does this work present and how does it differ from playing a rough and tough character like Ana in “Tomb Raider?”
Bess: I am so fortunate to have worked on “The Property Brothers” because I had an amazing producer/director to work with, Danny Downing at Red Arrow Industries. It was just the best narration job ever. I can’t say there was a difficult or challenging thing about it. It was pure joy. Narration work involves a lot of sight reading, and reading to time. Those things are not difficult for me, as I have a pretty good internal clock. Keeping your energy up for narration is important too. But that’s what espresso is for.

TrunkSpace: When you look at your career moving forward, what would you like to accomplish? Do you have bucket list items that you want to check off in your career? Maybe a character you have always wanted to lend your voice to?
Bess: I would very much like to play a recurring, comedic role in a well-loved, well-written primetime animated series. I’d like to play a character that resonates with kids and brings them happiness. Yeah, I’d like to contribute to the happiness of the world. I’d love to work alongside some of my heroes. Mostly, my dream is to keep working until I just don’t want to anymore. I’m not sure that day will ever arrive, though. So, I guess I want to work as long as I live! That’s how much I love my job. I’m a lucky girl.

“Agents of Mayhem” is available now on PlayStation 4, Xbox One, and Microsoft Windows.